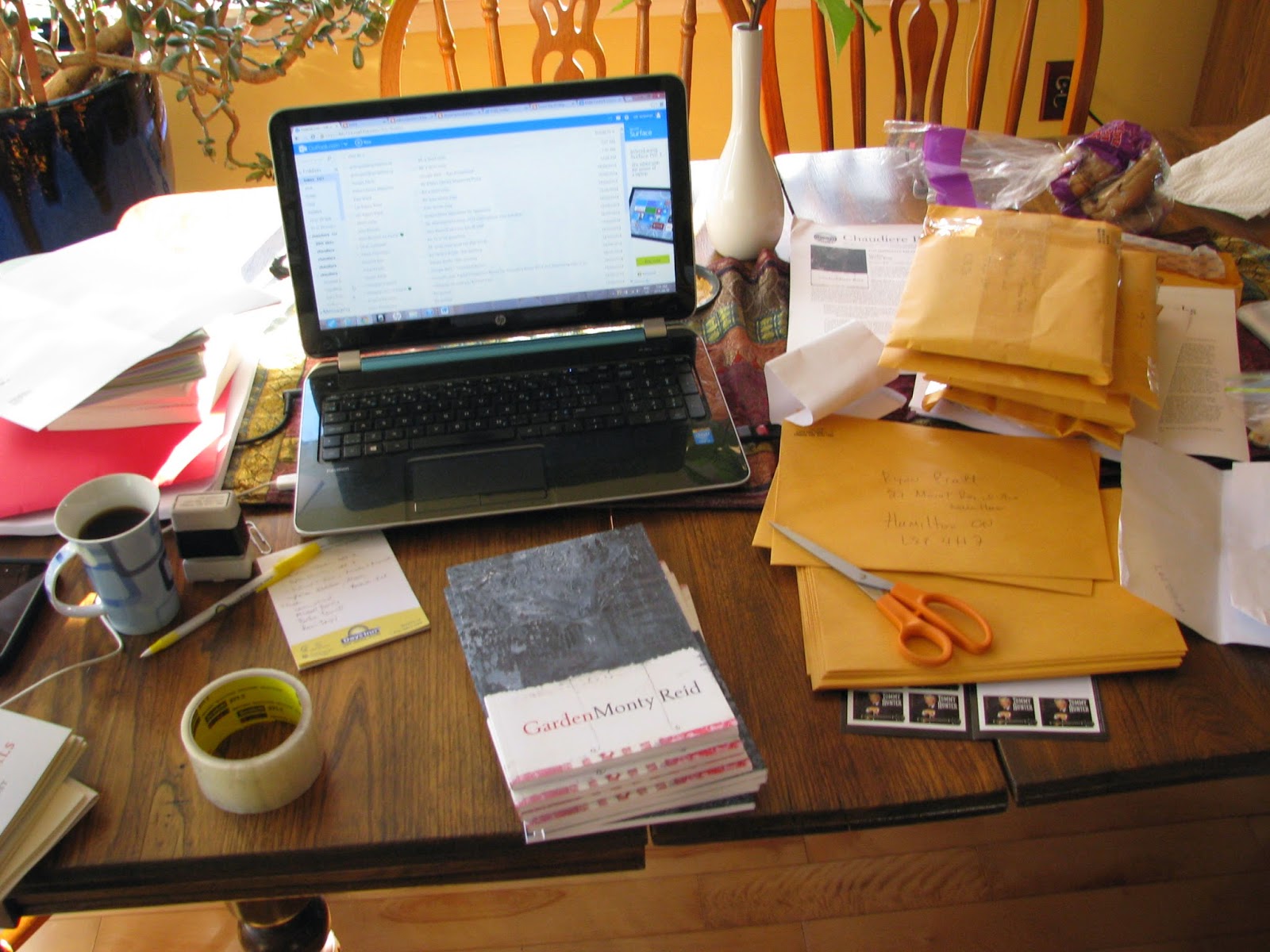 For those sick of these missives, worry not: this is the final installment. Our trip was rather big, I know, and we are still recovering (see parts one and two). We drove and we drove and we drove, hours and days in a car with our wee babe.

Friday, September 19, 2014: Before leaving Beth Crosby's house and the Wolfville, Nova Scotia area, I packaged up about a dozen envelopes with review copies of our three new Chaudiere Books poetry titles (Kiki, Amanda Earl; Singular Plurals, Roland Prevost; Garden, Monty Reid). We'd been carrying a box of such for the sake of eastern distribution (copies were left with more than a couple of people en route), but we didn't want to have to cross the American border with such. Given the books arrived the day prior to our departure, we couldn't not drive around with copies to show off (and/or sell and/or give away). 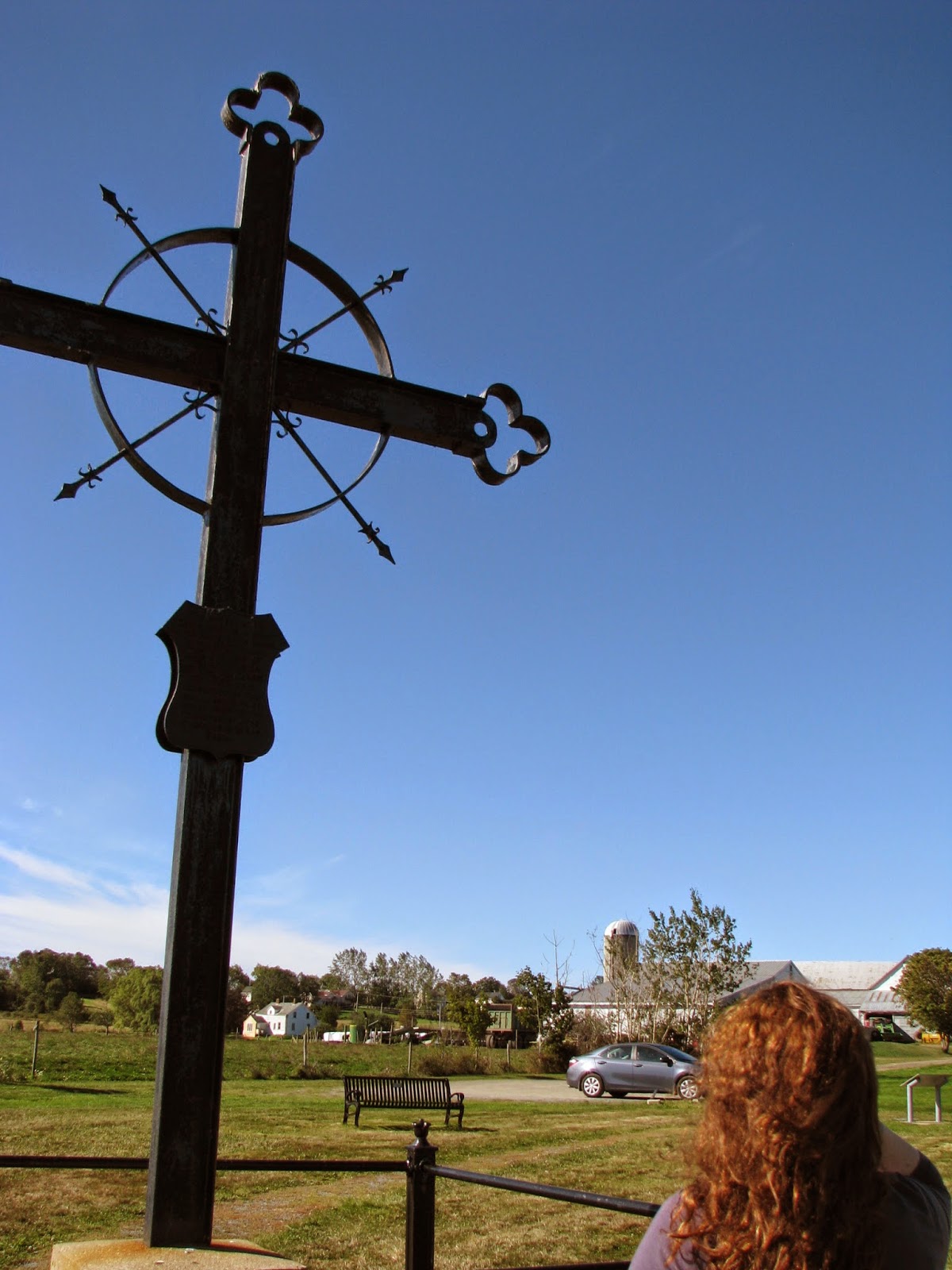 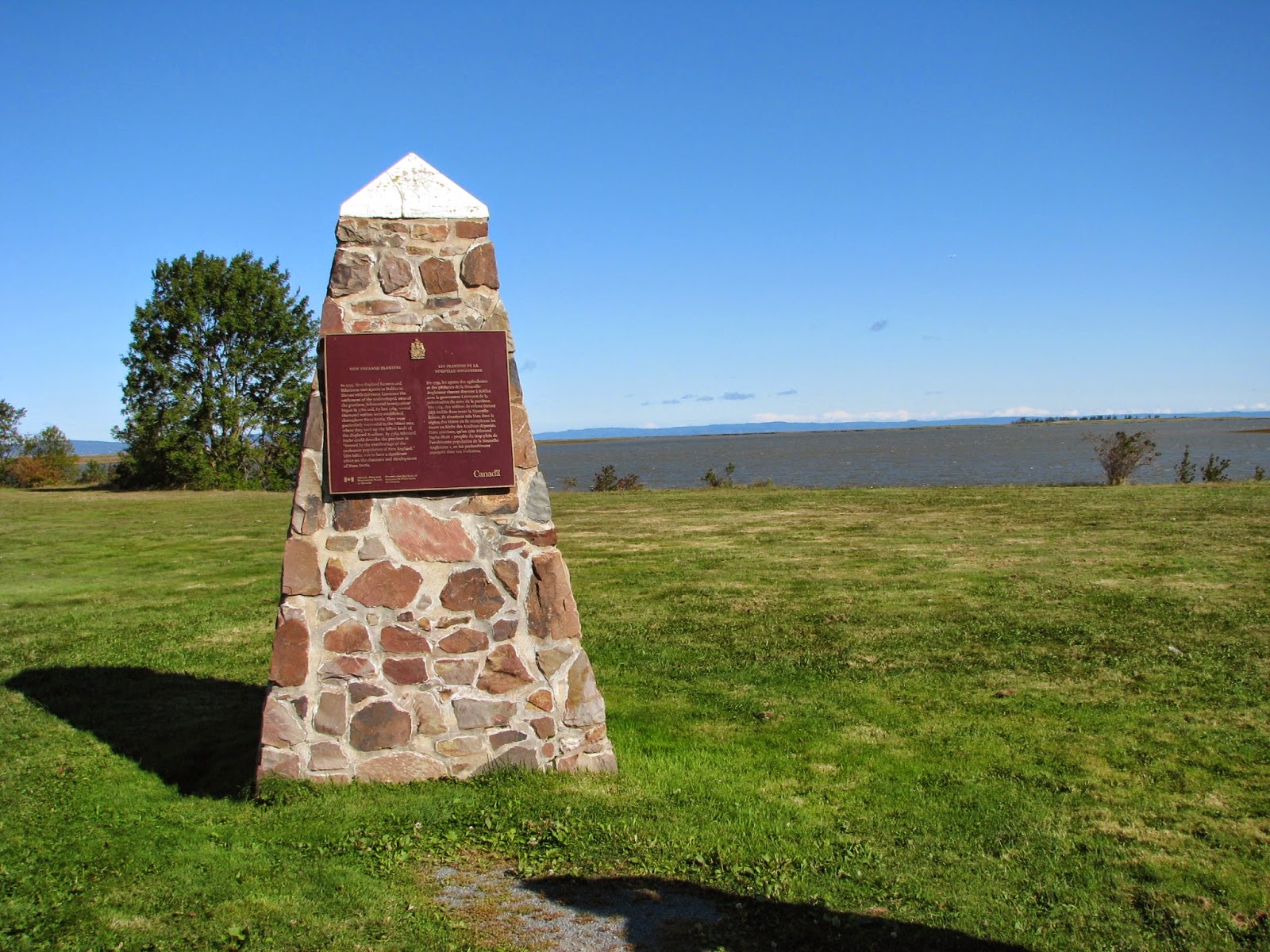 We were heading back for another night with Anne in Saint John, before heading towards the American border (a far shorter drive than how we arrived). Before leaving the Wolfville area, we swung over to Hortonville for the sake of the Acadian Cross and New England Planter's monument. Horton's Landing, which became Hortonville, eventually evolved slightly to one side as Wolfville, and the landing at Hortonville is not only where the New England settlers landed in 1760, but the point from which the majority of Acadians were deported in 1755. Given that a number of the important families in the region (including a couple Christine is descended from, such as the Steeves) are descended from these New England settlers, it does remain a slightly unsettling series of memorials and episode of history. Important to keep in memory, and attempt to properly understand, as best as possible. Still, strange that one has to drive, basically, down a farmer's back lane to get to said monuments (we waved; he waved back from his tractor). And of course, the view (including of Cape Blomidon--which I'm learning to spell without having to look up) was spectacular. 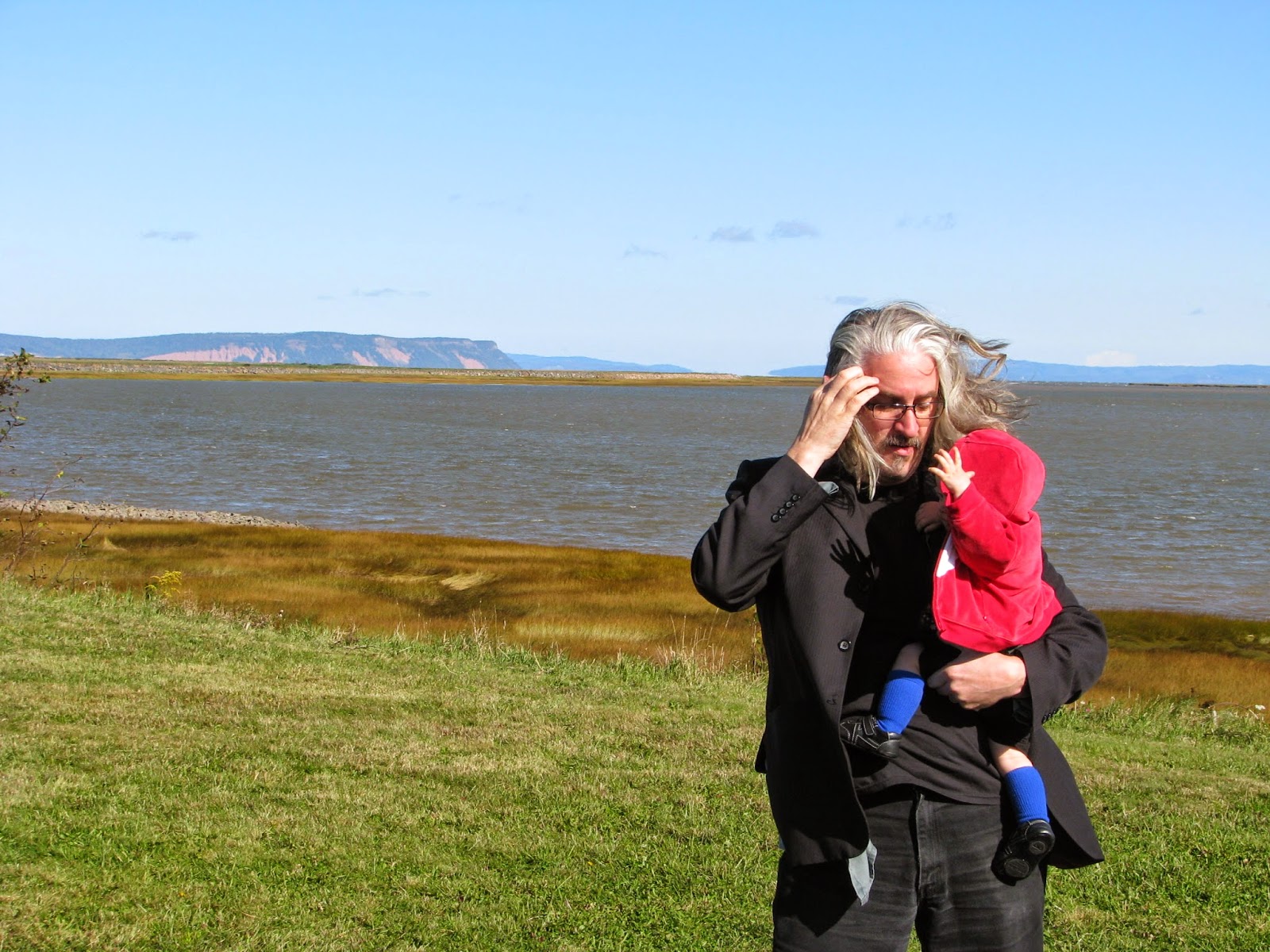 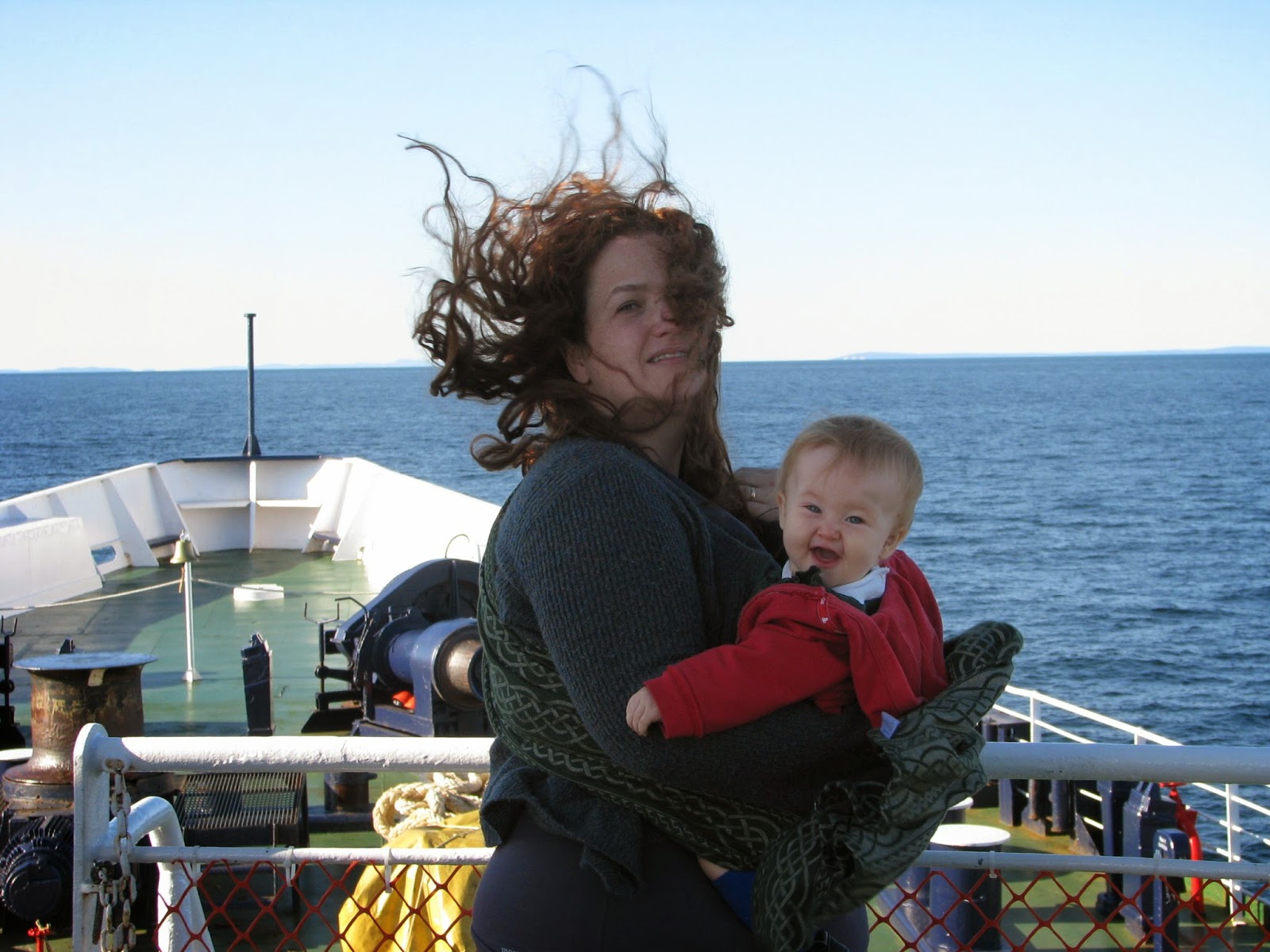 From here, we made the Digby Ferry, to traverse from the north-western shore of Nova Scotia back towards Saint John, New Brunswick without having to drive the long way around. The ferry took about three hours, and allowed Rose to eat lunch, run around in the play area (while Christine knitted and I slept) and even nap for an hour before we had to return to the car.

But before the ferry: we managed two stops at a series of stores called Frenchys. Apparently they're famous here. I picked up a new jacket. Apparently we had no choice. 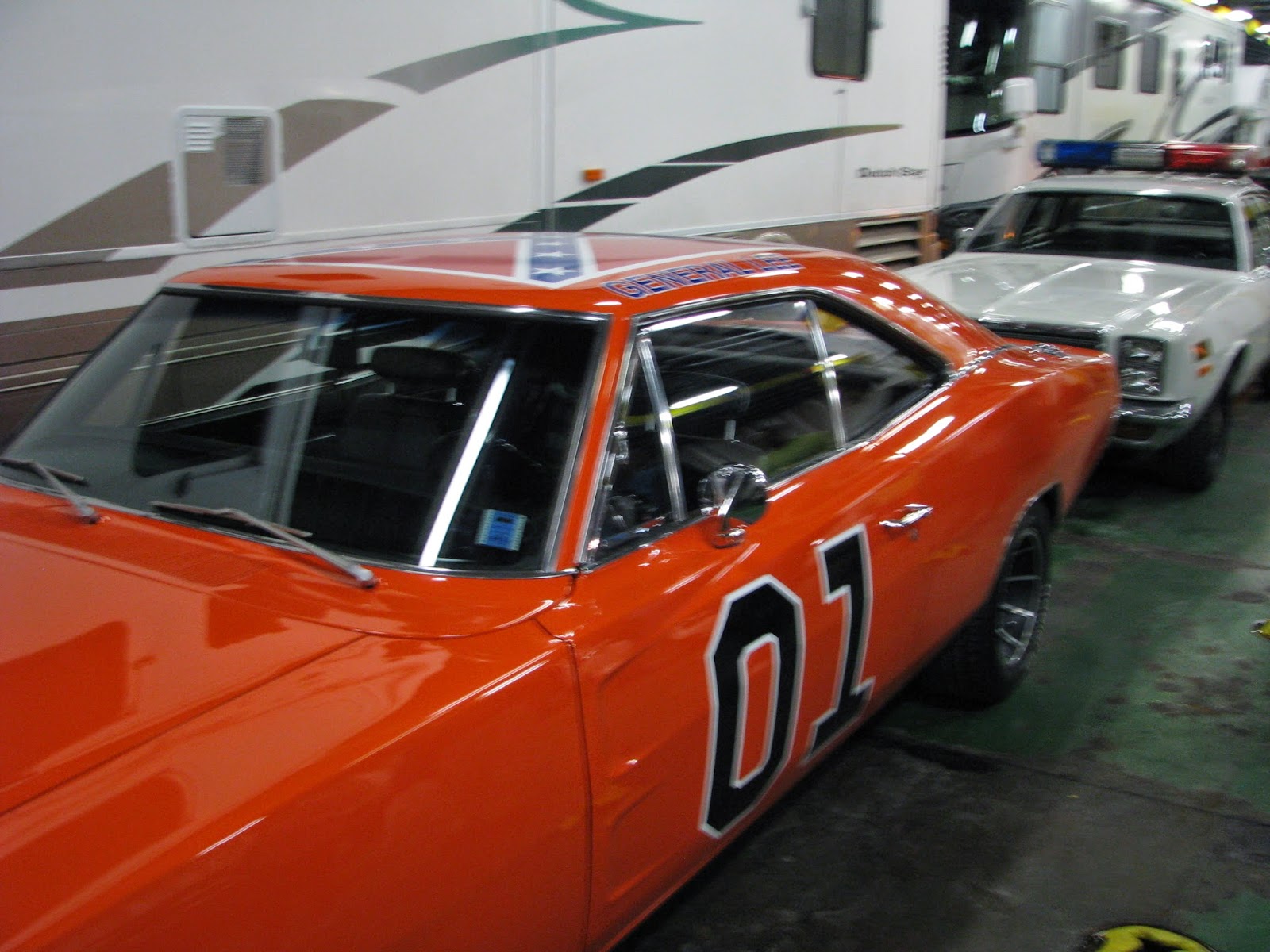 And on the ferry, when we did return to the car: we saw replicas (with Nova Scotia plates) of the General Lee and Hazzard County Sheriff's car from The Dukes of Hazzard, which was completely amazing. And yes, the driver of the General Lee did honk his horn as he drove off the ferry (people actually cheered, including myself).

Is it wrong to suggest that this might have been the highlight of the trip? 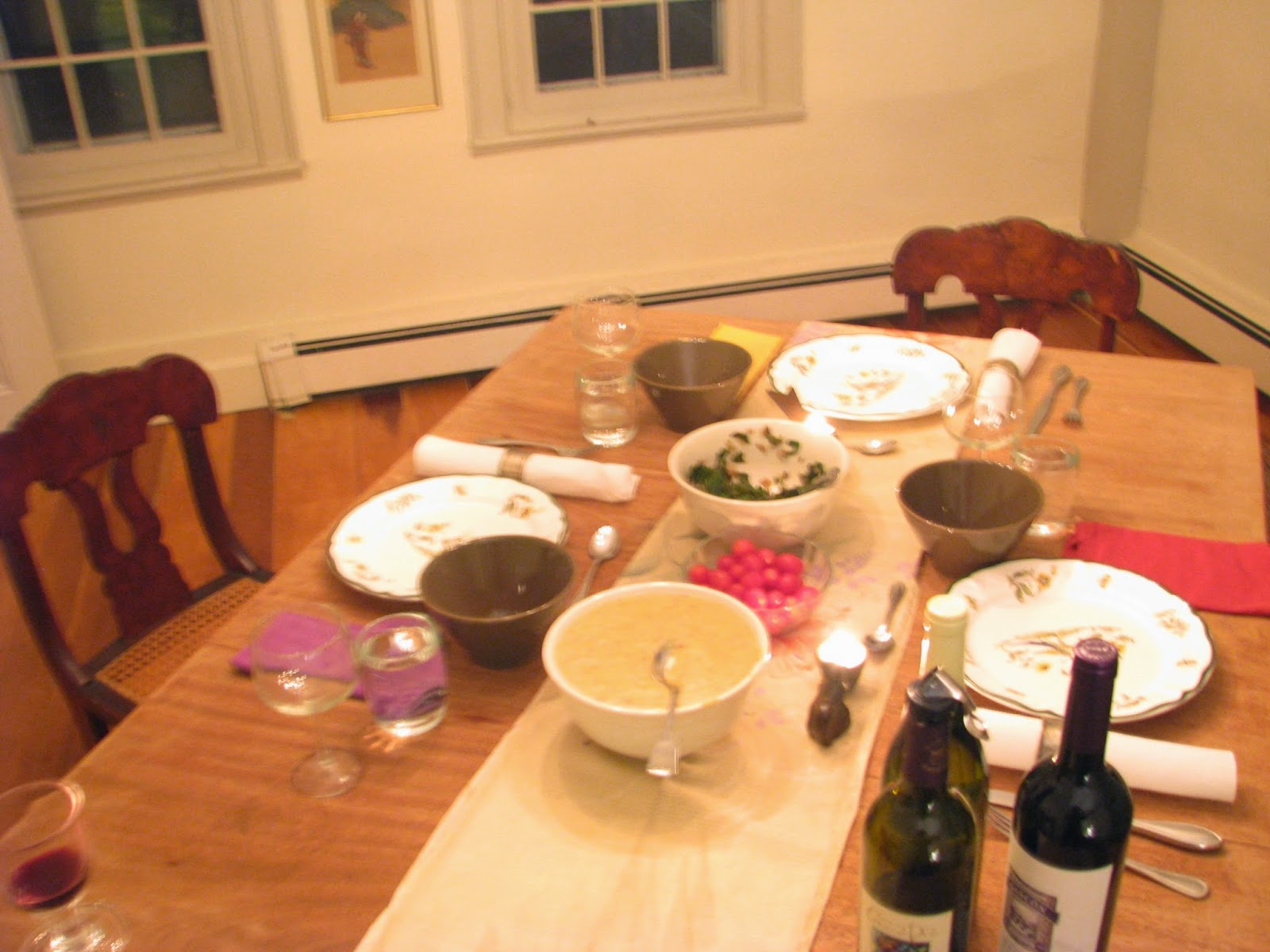 Saturday, September 20, 2014: Rose turned ten months old, and we awoke in Saint John, New Brunswick, before a six-ish hour drive west into the wilds of Maine (wishing we'd had the time to stop in at Orono, to visit with Ken Norris, but such wasn't in the schedule), for the sake of two nights in a house from 1790 with Christine's bookbinding pal, Stephanie Gibbs, who was good enough to drive the few hours north to meet up. And when I say "the wilds of Maine," specifically Dresden. 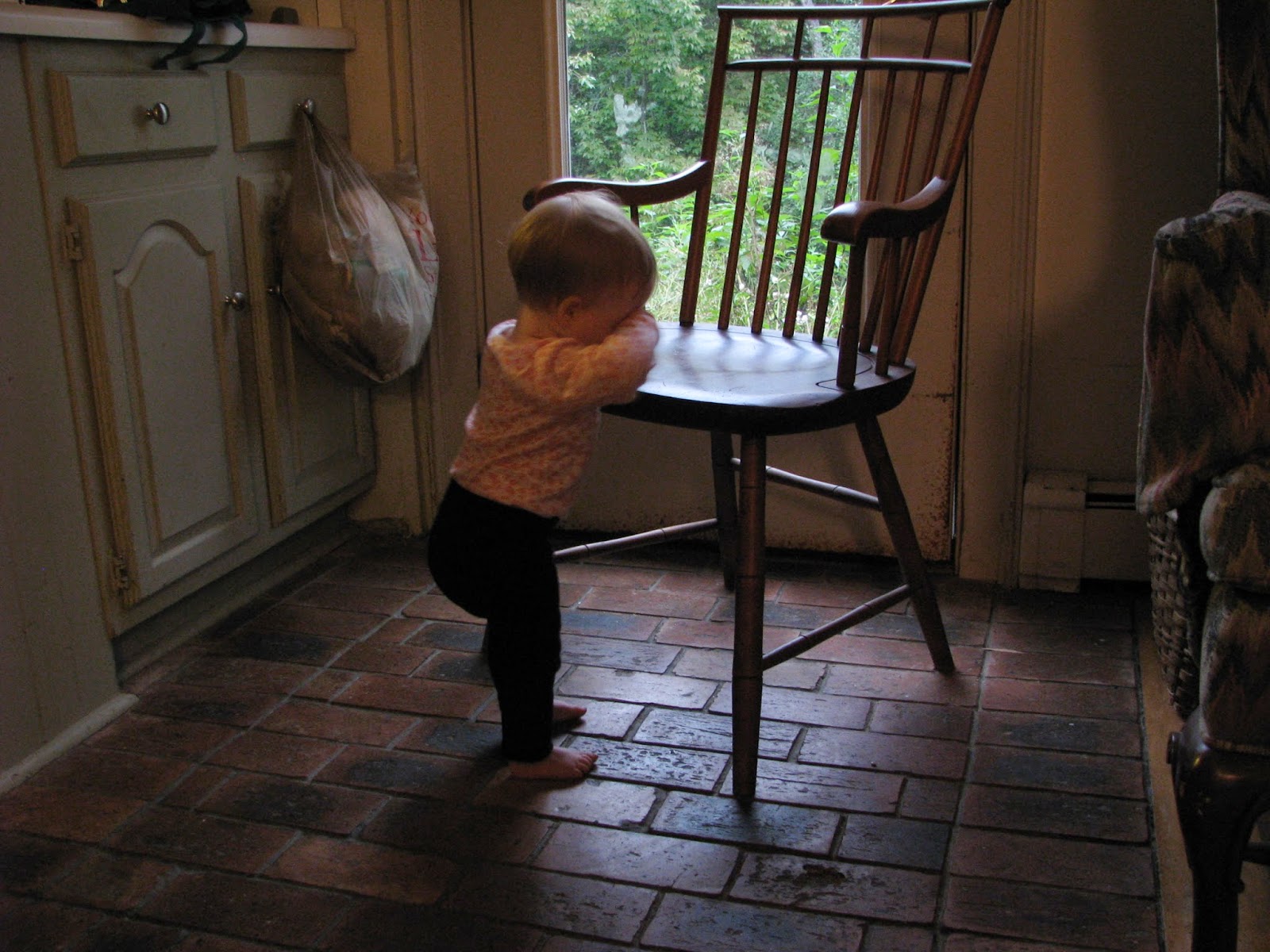 Exhausted from the drive, we lived with little-to-no internet (which had already been driving me mad for a couple of days), and Stephanie prepared the most magnificent meal for us, as we enjoyed a series of wines we'd picked up on our travels, as well as some she'd brought.

The drive was long. We were wearing a bit thin. After a week on the road, it was good to remain somewhere for two nights.

As well: Rose had been leaning towards walking for some time, and managed a series of half-steps while here, which Stephanie was enormously amused by (her first steps are American!). But nothing official, as of yet (it has happened since, though). 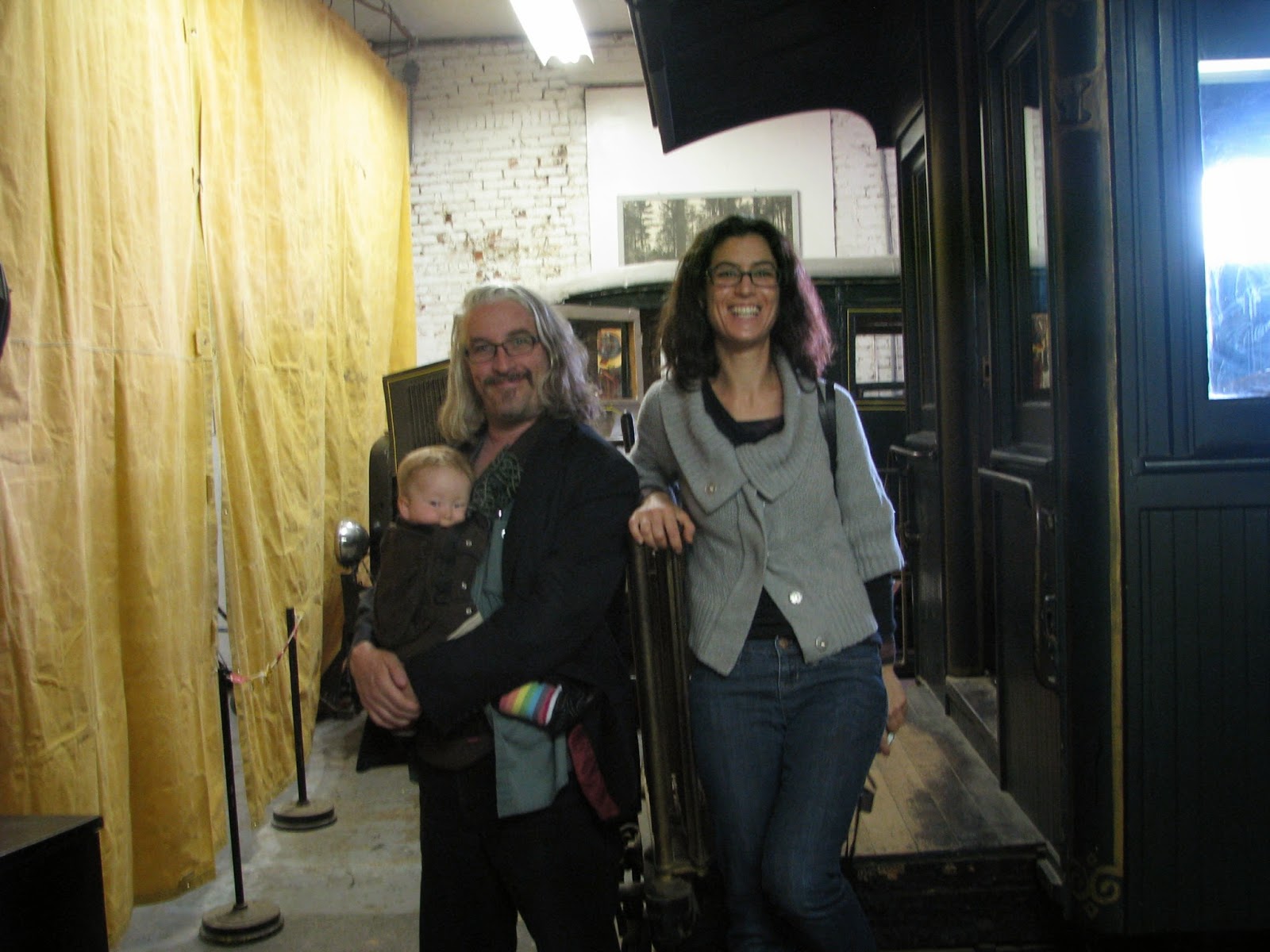 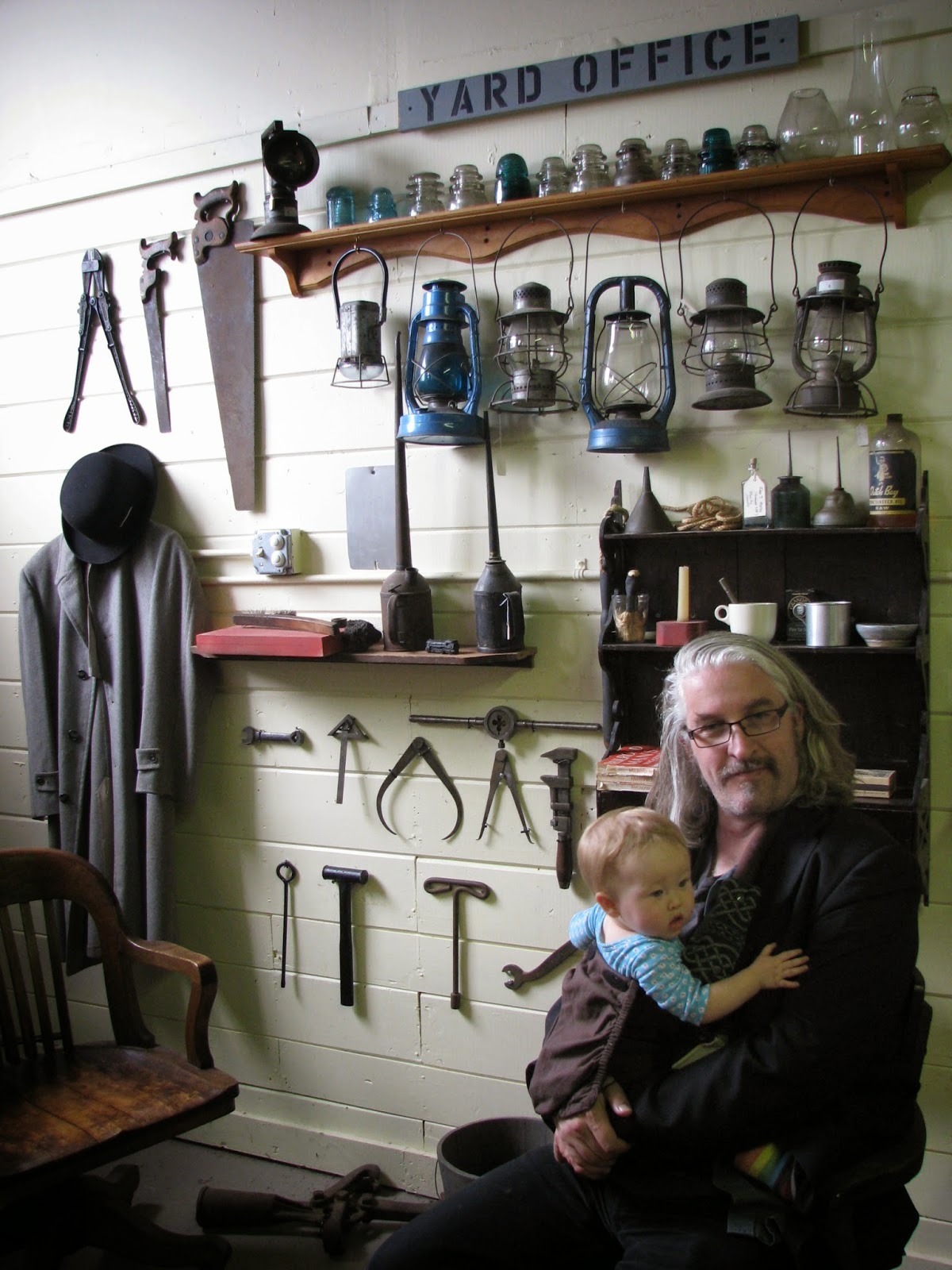 Sunday, September 21, 2014: Today was all about trains! We drove the hour or so into Portland, Maine, and visited the Maine Narrow Gauge Railroad Co. & Museum, where we saw some wee lad was celebrating his birthday (which was a slightly uncomfortable thing to walk through). There were ancient train cars, a history of the trains, and other things about trains. Stephanie explained that the rail system in Maine, when it was built, couldn't hook up with the other train lines throughout the United States due to the fact that the tracks (and, therefore trains) were far too narrow, so most if not all of the system was pretty much abandoned. Part of the museum included one of the trains still operating on a section of the track, which rolls a few miles down the track (with a beautiful view of the waterfront) before pausing (to allow photos, and a short walkabout) to return back to the station, clickety-clack, clickety-clack. 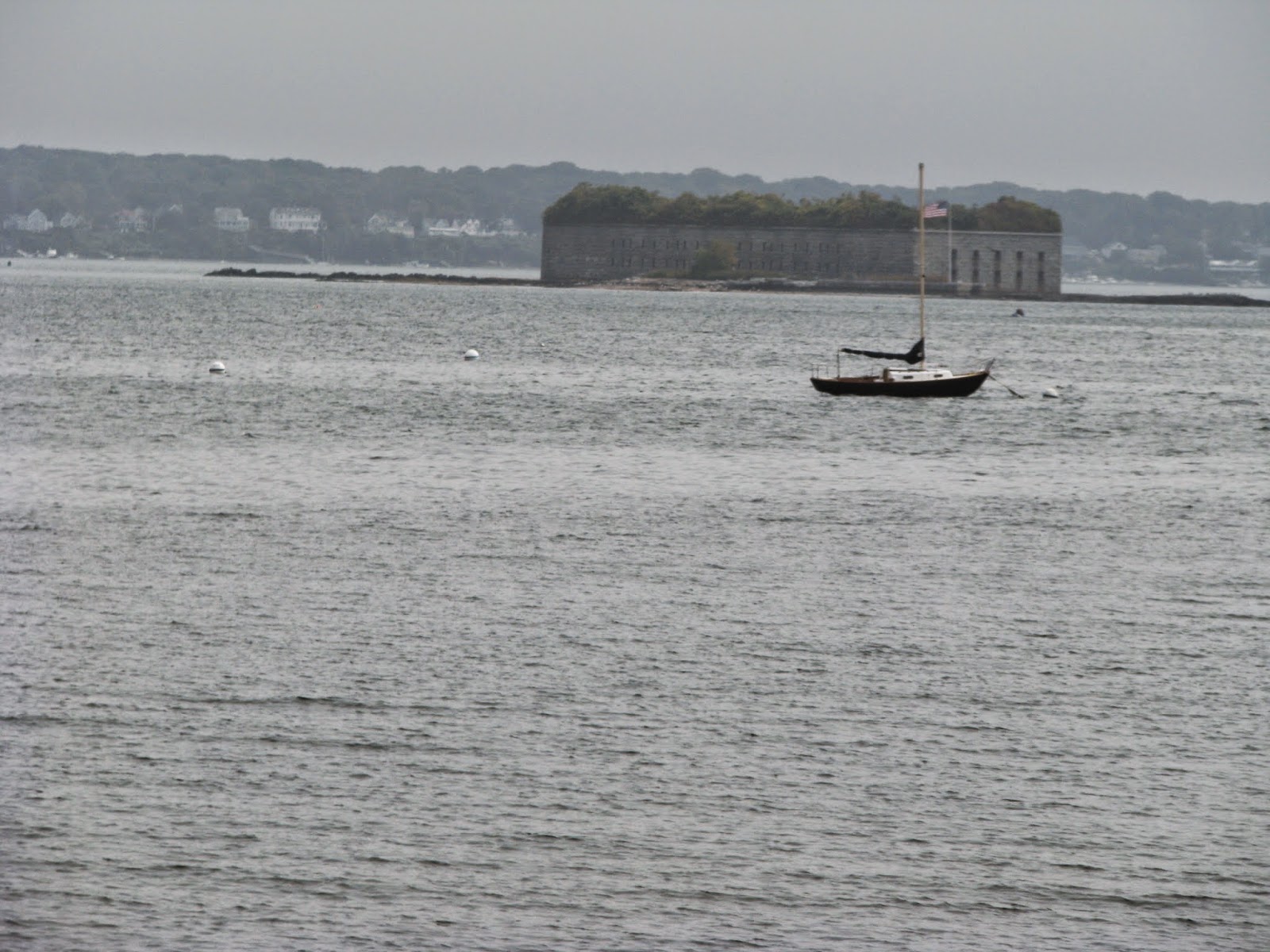 "We can see all the way to France!" Stephanie said (which Christine didn't believe). We could, at least, see a fort in the distance... 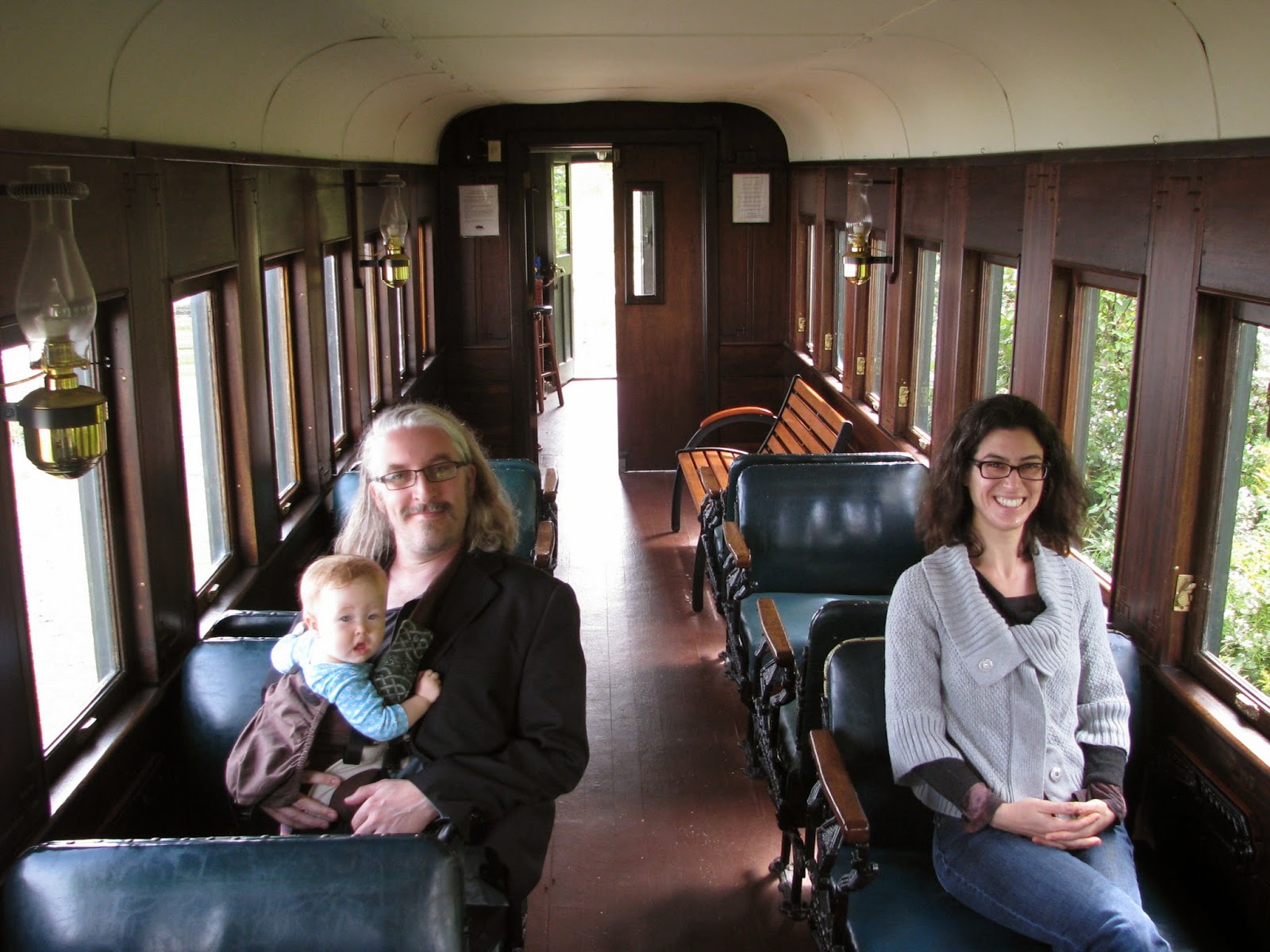 Rose charmed everyone in our little car (of course), and waved to passing pedestrians (of course), most of whom even waved back. 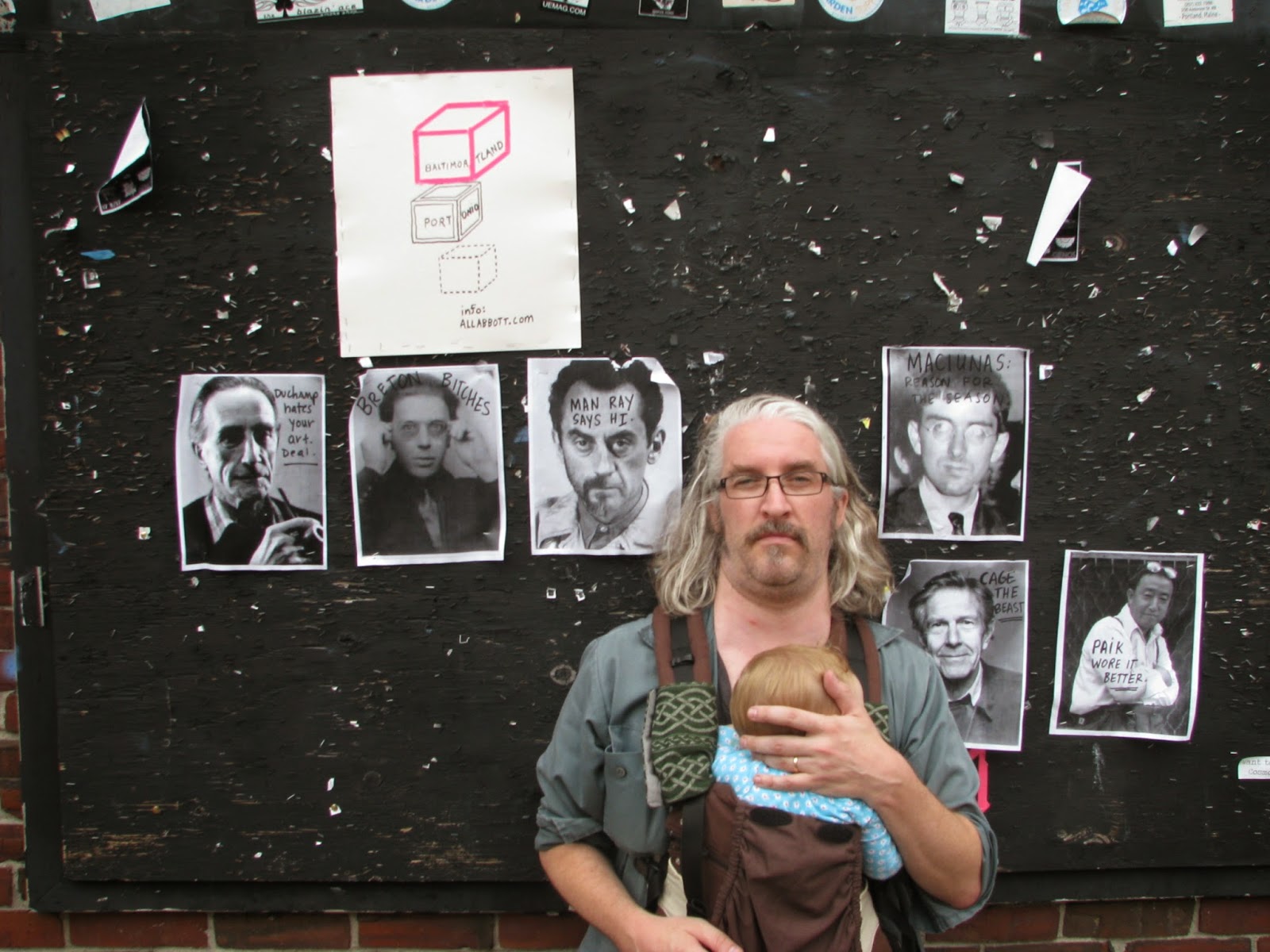 Returning through Portland proper, we found a used bookstore, but Rose didn't really allow for much exploring (we did managed to pick up an item or two, at least).

And did you know Longfellow lived in Maine? I didn't. We went by the house and museum, but hadn't the time to wait the hour-plus for the next tour (you can only go in via the tour). We took pictures of each other out front, purchased some postcards in the gift shop next door, and wandered off, exhausted from the day. There was even a statue of him a few blocks away.

Oh, those winding Maine roads. The drive was short, but took absolutely forever.

Once back at the house, Stephanie left for her own drive back home. 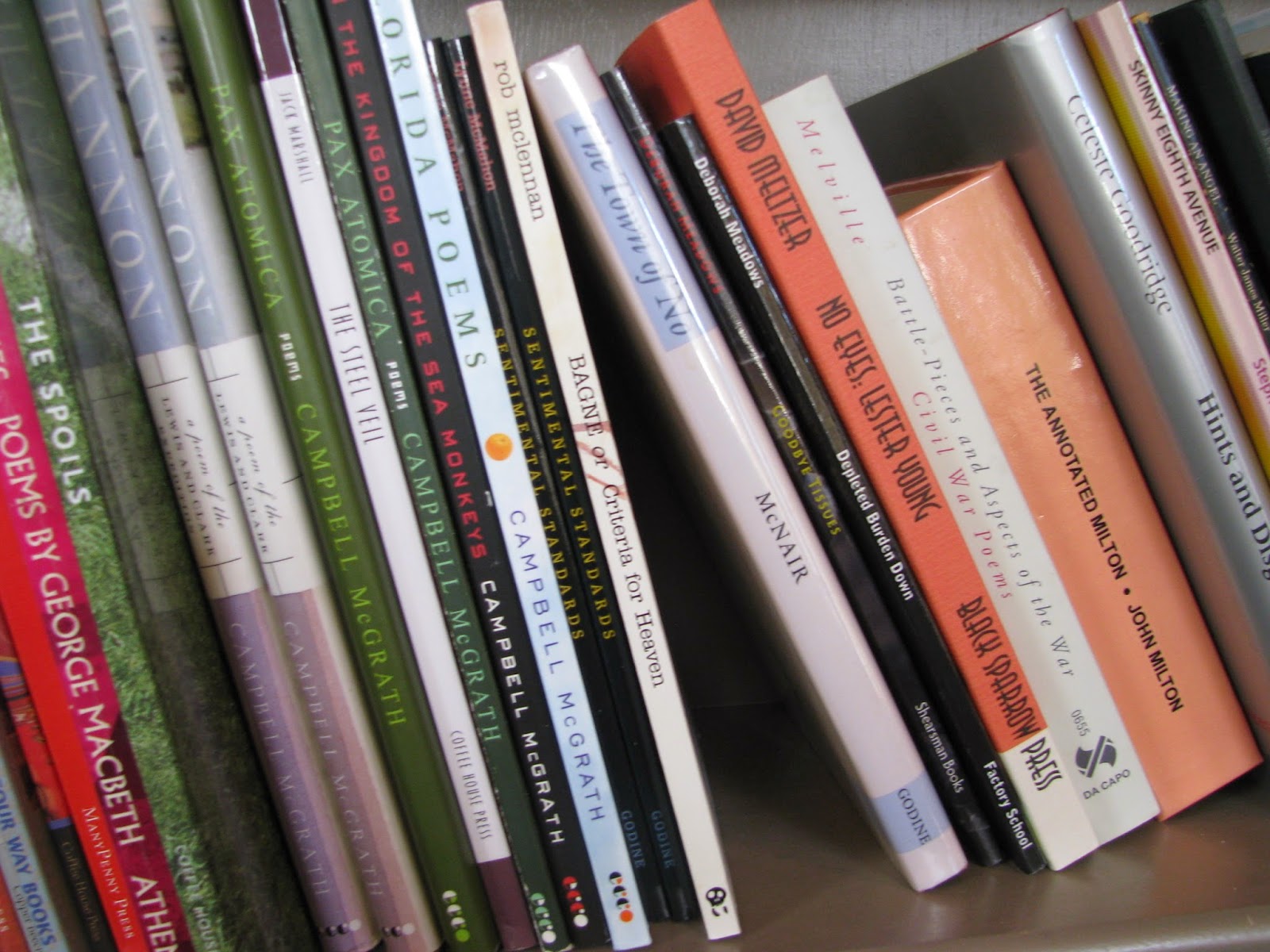 Monday, September 22, 2014: It was sad, slightly, leaving our ancient house, but good to get back on the road. I think we were all eager to be back in our own space.

We drove and we drove. Rose woke from her morning nap, and cranked until we pulled over for lunch, managing to discover Portsmouth, New Hampshire and their magnificent Portsmouth Book and Bar, which everyone needs to go visit. How incredible was this store! I found a copy of a book of mine on their used book shelf (as well as other titles by Canadian poets Douglas Barbour and A.F. Moritz), and we not only spent a handful of our American dollars on their incredible selection of used books (and had coffee, as we fed Rose some lunch), but left a few copies of the new issue of Touch the Donkey as well (I produced a handful of copies of the third issue a bit early, especially for this grand trip of ours). I finally picked up a copy of C.S. Giscombe's legendary Giscome Road (for example), as well as a variety of other titles.

And the bookstore had free WiFi (glory be!). All was good with the world. 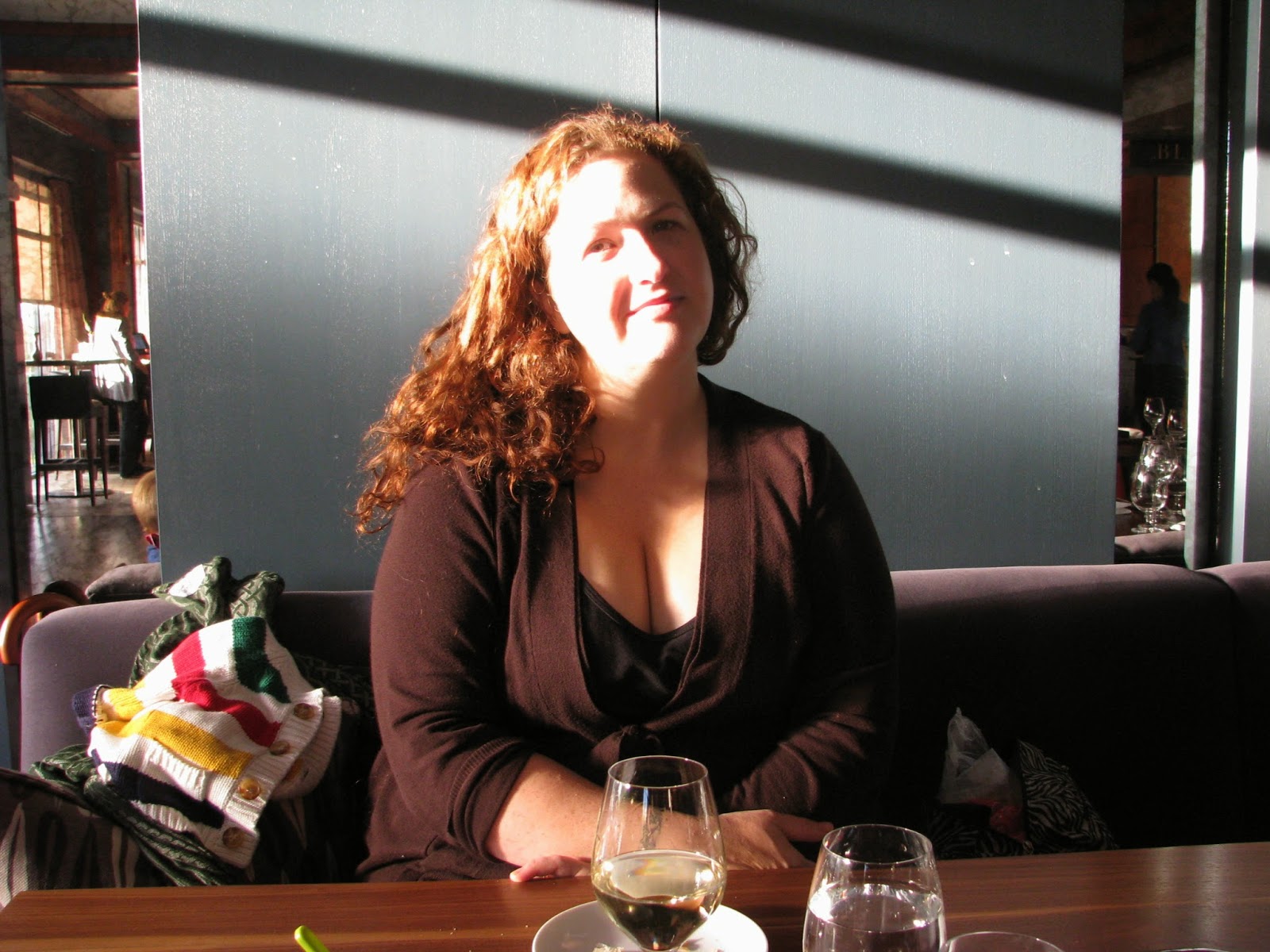 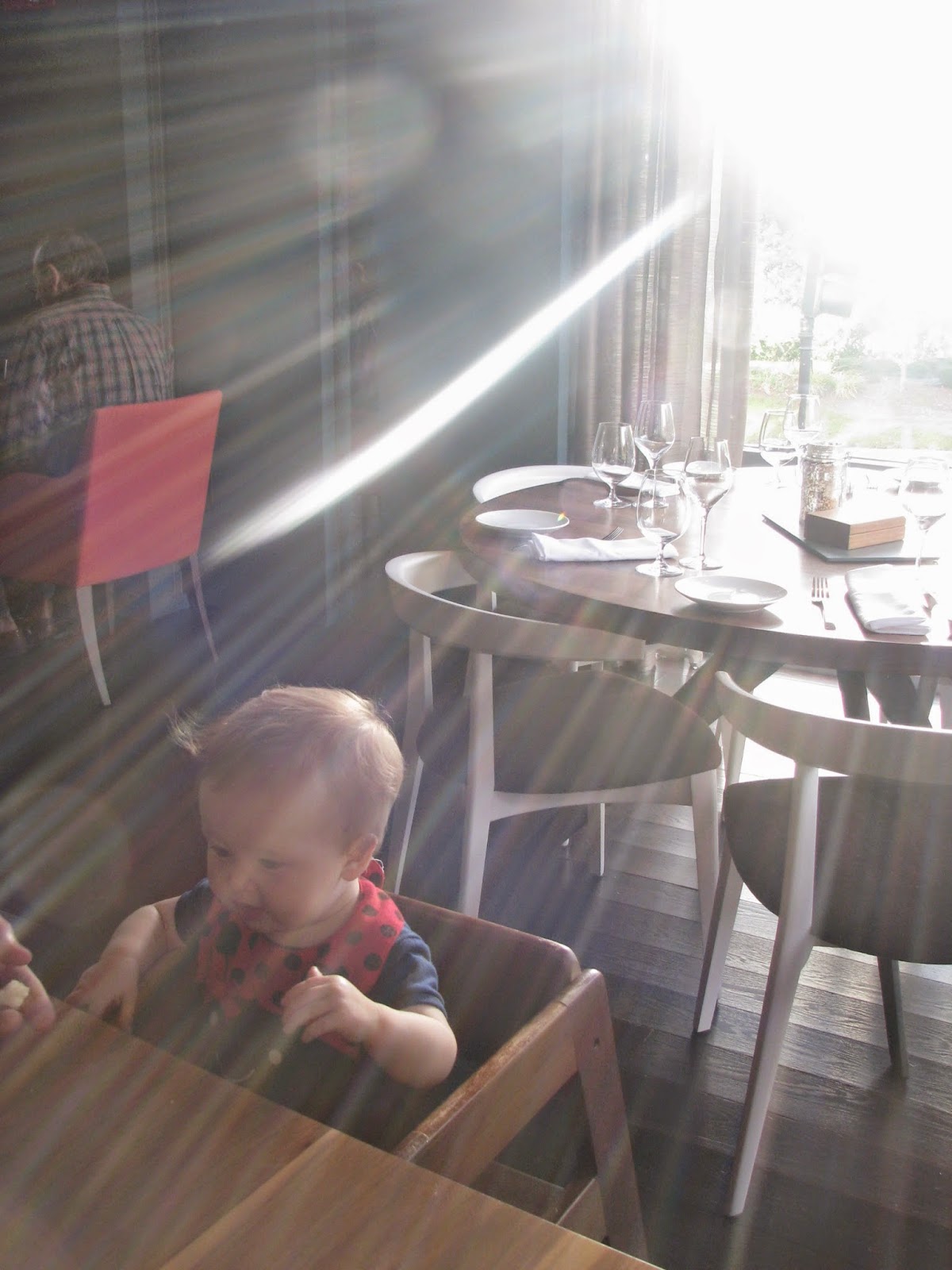 To break up the drive, we stopped for the night at a hotel in Burlington, Vermont, and I became convinced that I'd been to the city before, with my parents, on some mid-or-late 1970s family trip of some sort. Could this be true? I've asked my father, but haven't yet received a response.

The hotel was lovely (we spoiled ourselves, slightly). We even managed to have dinner in a nearby restaurant as well, which Rose allowed (helped by the fact that we were early enough for the dinner rush that the restaurant was mostly empty). She ate, tossed food around (as babies do) and waved and smiled at everyone. The sun, as you already know, shines down upon her.

We walked down by the water, to see what we could see, along the shores of Lake Champlain, named after that fellow who once wandered by our own little locale, and lost himself an astrolabe... 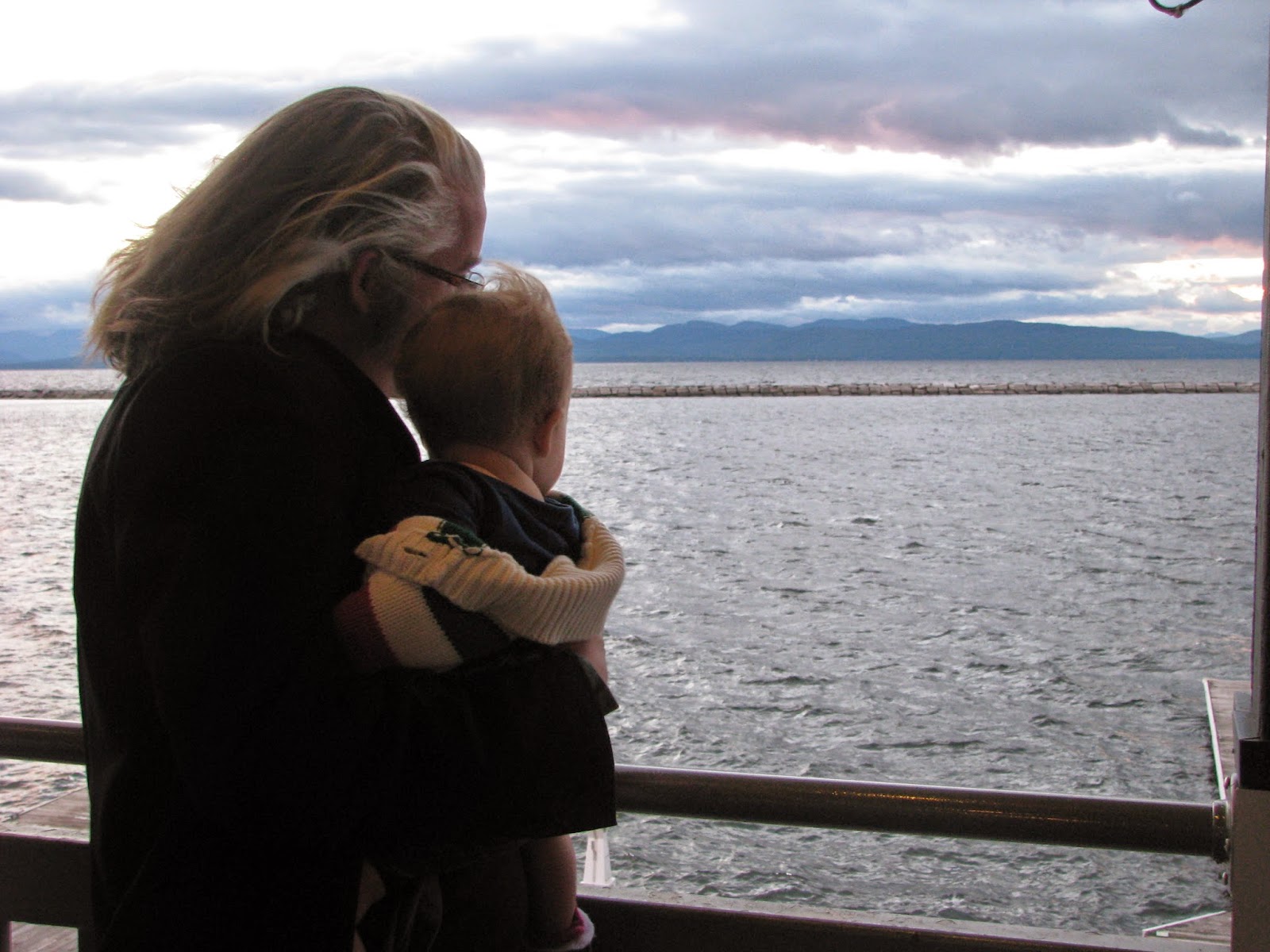 And once back in our hotel we showered, and slept. A king-size bed. Oh my. 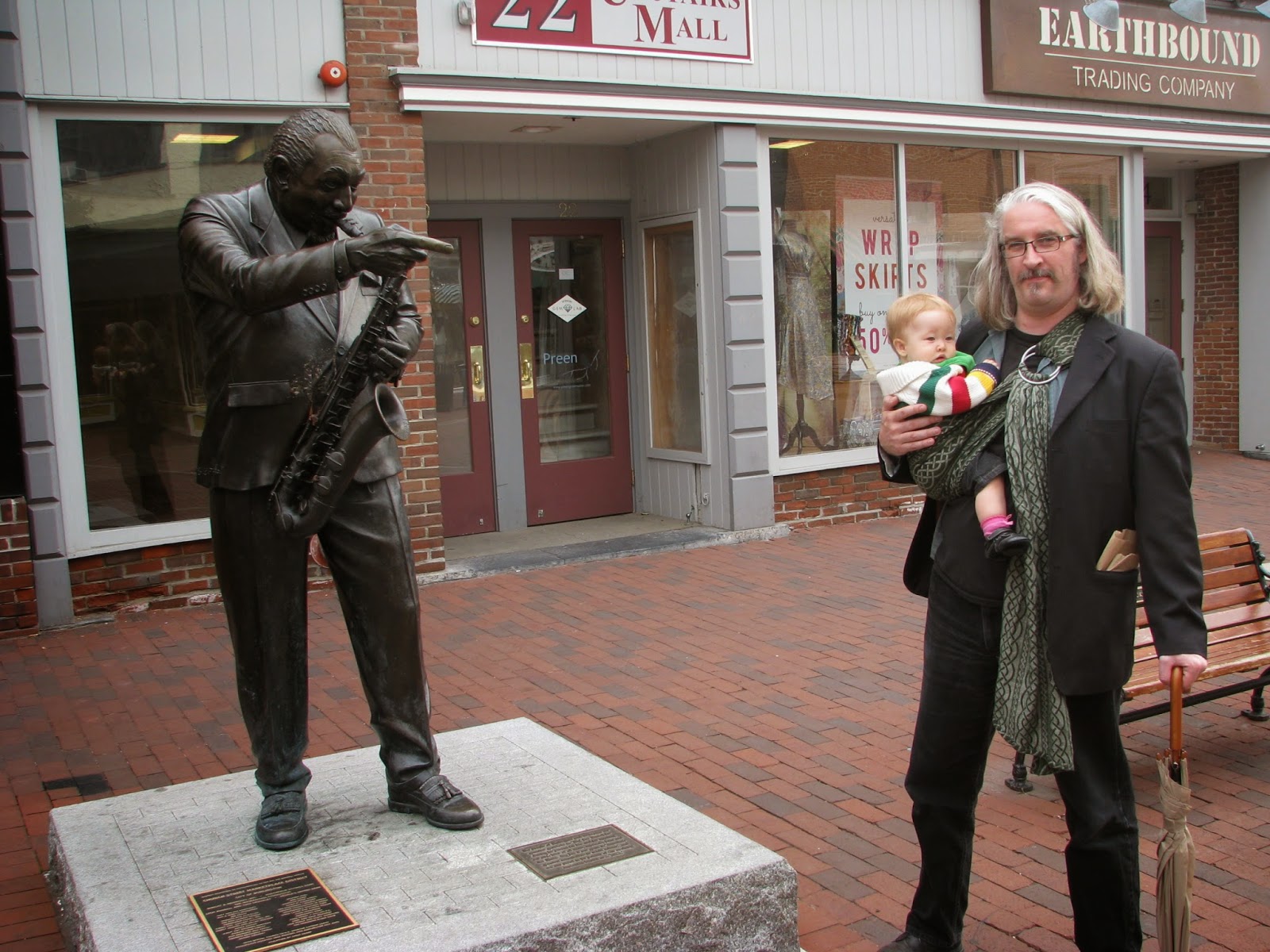 Tuesday, September 23, 2014: Before leaving town, we wandered a few nearby shops, including a bookstore. Christine picked up some flannel (they had a flannel shop). We picked up a bacon-flavoured candy necklace for Steve Zytveld (how could we not?).

Outside the flannel store, a jazz-statue pointed at us.

We drove north, and north. Christine didn't want to utilize her cellphone for the sake of directions, so we used our gps (which had been invaluable over the past few days of lack-of-cellphone-service). Unfortunately, instead of the plan we'd had to drive through beautiful New England and cross the border at Cornwall (I'd really been looking forward to crossing the International Bridge there), the gps took us "the fastest route" (dammit) and we crossed somewhere around Sherbrooke, Quebec, having to make our way back west through Quebec and down Highway 401 (we were annoyed by this disruption to our little plan). 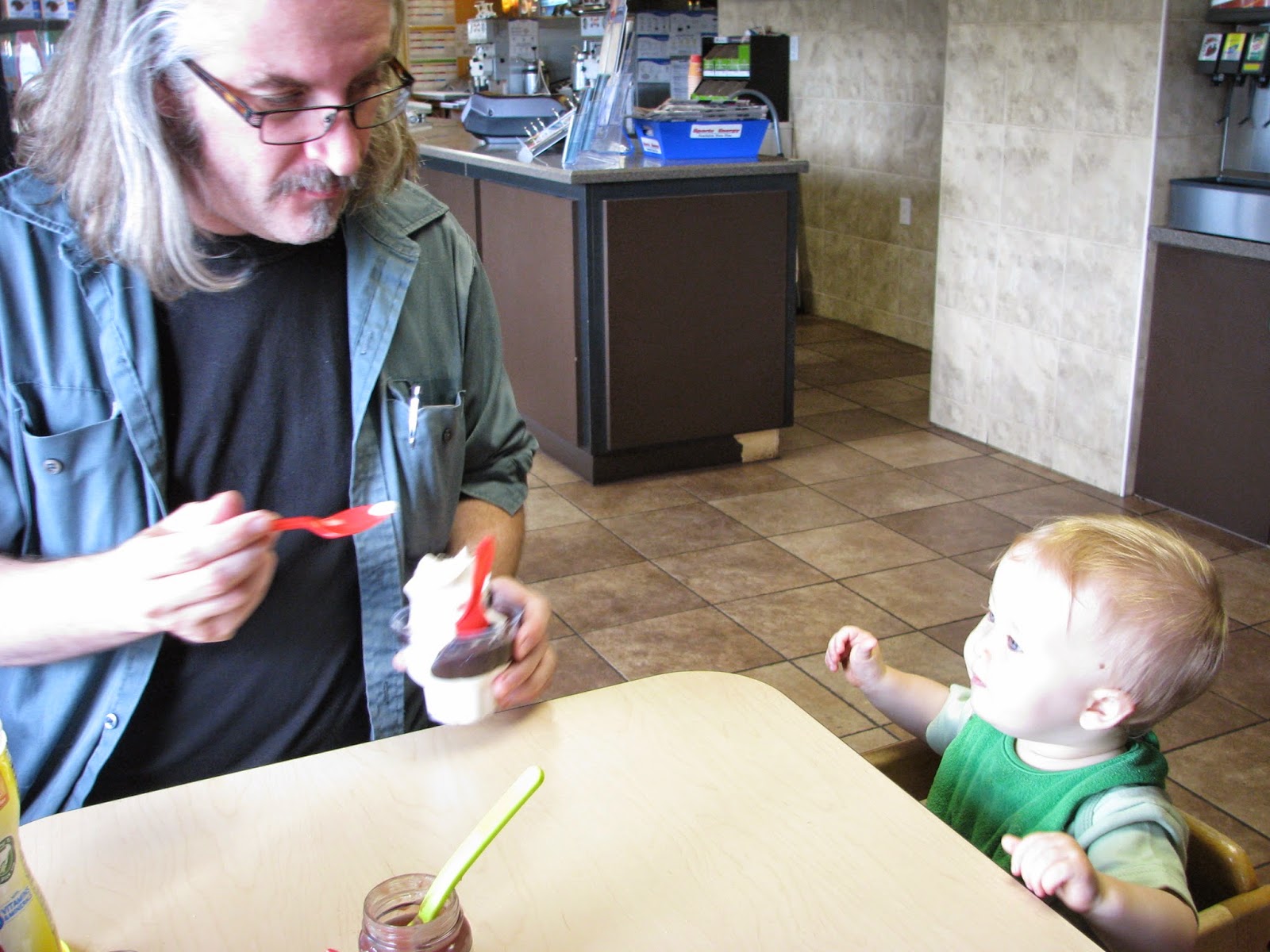 Another highlight: stopping for lunch along the 401, I realized our options could include the Dairy Queen in Lancaster, Ontario (the south bits of Glengarry County), where I convinced Christine we should stop for a while. Even though it might be considered slightly early, we gave Rose her first tiny taste of ice cream after a short lunch (she liked it, but didn't seem particularly overjoyed; perhaps when she's older we will attempt this again). I enjoyed this immensely: this is where my other daughter, Kate, had her first taste of ice cream (with her mother, her granny and I) some twenty-some years earlier. (I have spent much time in this Dairy Queen over the past thirty years.)

There are some traditions that should very much be held.

We were home by 4pm, relieved and exhausted. After this, I don't think any of us ever wanted to get into a car ever again.

For charming photos of the signage from narrow gauge trains (but much less commentary), see my report on the same trip.
http://drinkyourpudding.blogspot.com/2014/10/signs-wonders.html
Of course you can see France from Maine. Just not when there's fog.