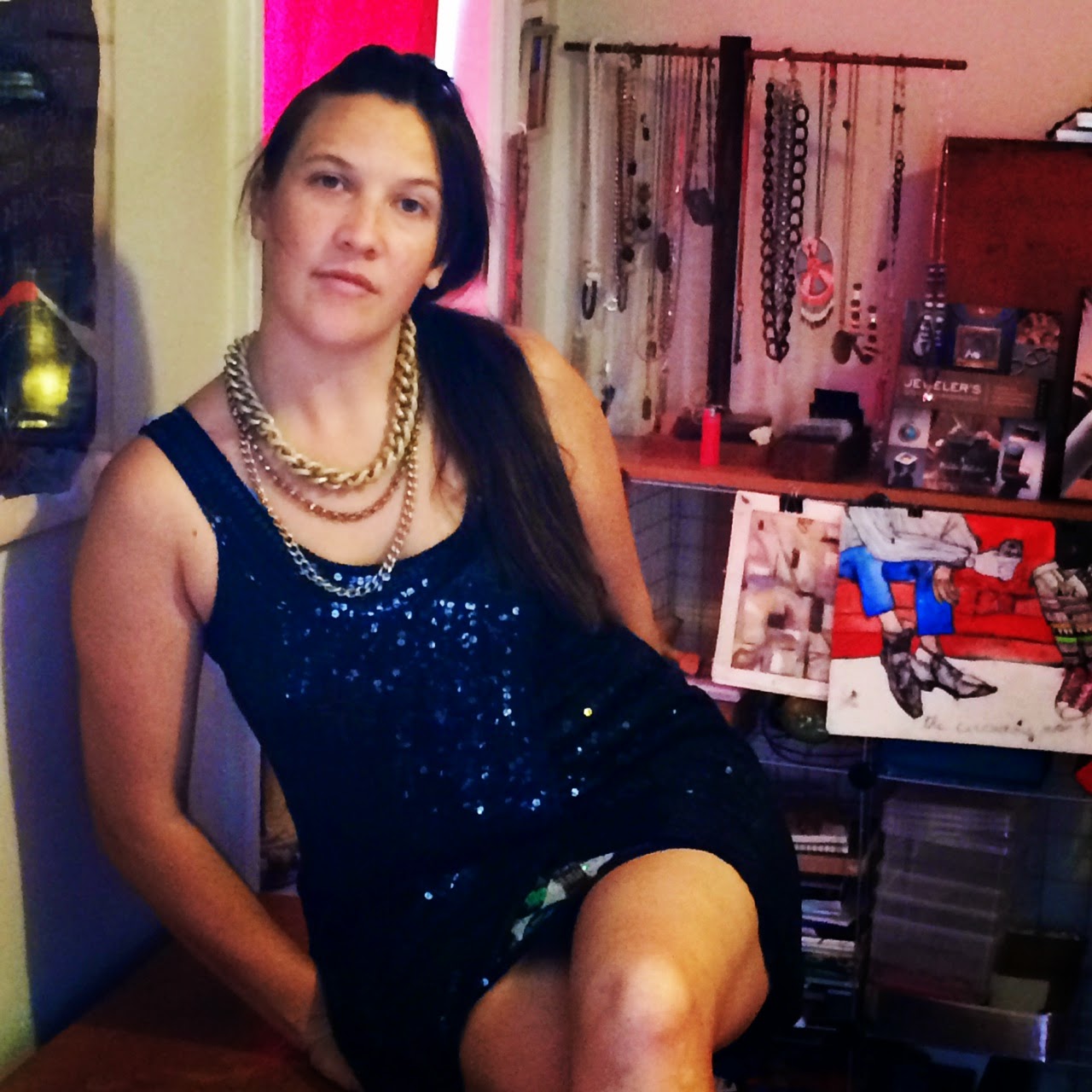 Paige Taggart is from Northern California and currently resides in Brooklyn. She is the author of five chapbooks: Last Difficult Gardens, DIGITAL MACRAMÉ, Polaroid Parade, The Ice Poems and I am Writing To You From Another Country; Translations of Henri Michaux (forthcoming). Her first full-length collection Want For Lion (Trembling Pillow Press) was published in March 2014 and her second Or Replica (Brooklyn Arts Press) later in 2014. She has her own jewelry line (mactaggartjewelry.com) that specializes in blinging-out poets.

1 - How did your first book or chapbook change your life? How does your most recent work compare to your previous? How does it feel different?
My first book allowed me to change my life in a really personal way (it's really too personal to explain and I don't want to talk all in metaphor) but I will just say that it did provide me with a crucial exit point at a time when I needed a change and a point of escape. The book opened up doorways for me to strategize ways to change an existing mode of living and live in a freer way.

I think my most recent work aligns itself with my past, present and future work, and that it all shares a "language first" sensibility. Although I am always trying to invent new parameters and a system that governs each body of work, in every possible mode that I find myself working in I always face the same call to judgement. Where I try and decide if something is working and if not why and what can I not see?

2 - How did you come to poetry first, as opposed to, say, fiction or non-fiction?
That baby carriage metaphor! Language pulls me around and I follow it to wherever it leads me, and that I find myself at poetry is because poetry is more able to swell and recede with the overall meaning of each word, whereas fiction and non-fiction tends to be much more focused on creating meaning in a clear narrative that exercises language’s' everyday tendencies; whereas poetry pushes the limits of language, spinning miter into the abstract and strengthening the raw artifice of desires unseen to everyday humans.

3 - How long does it take to start any particular writing project? Does your writing initially come quickly, or is it a slow process? Do first drafts appear looking close to their final shape, or does your work come out of copious notes?
I work really quickly, in bursts, usually I won't be writing for a bit and its like I'm letting it build up in me so that I can get to a point where I can exploit myself and use all the energy and built-in inertia to deliver something quickly and spontaneous. Often it relates to where I am in my life- be it a wild state, a ponderous state, a language driven state, or a loving state. I try to give all I can in the moment of writing and shred like a snowboarder in the perfect snowy pipe. The thinking is the pushing through time to create a momentary world with which to consider and let that be amplified. It's not a slow process, it's always taking its final shape and I don't work with any notes. I am not a line-by-line poem, I don't even know how to think: "well that's a great line, I'm going to save that and use that later," that perception isn't something that drives me, if I get a line, there's always the next, and the next, and the next, and I have to follow it. If I don't have the right time or space to work like this, then I won't even let myself travel there. I will resist, create a dam until I ready the flood.

4 - Where does a poem usually begin for you? Are you an author of short pieces that end up combining into a larger project, or are you working on a "book" from the very beginning?
In headspace, usually I think up something and follow it into poem land, and end up compiling a bunch of pages in a notebook, which I later type up and adjust the poems to either fit already existing projects or else I find a thread and work with that until it becomes something. I have a document that's a bunch of different style poems where I toss one-off poems into it and it's a mixtape style format. I'm most often working on multiple pieces at once and am always already arriving towards composition of a book.

5 - Are public readings part of or counter to your creative process? Are you the sort of writer who enjoys doing readings?
I do really like giving readings and I certainly see this as a part of my process in that I write poems that beg to be read aloud.

6 - Do you have any theoretical concerns behind your writing? What kinds of questions are you trying to answer with your work? What do you even think the current questions are?
Theoretical concerns, like religious quests, like sacred text, like am I bending backwards to discover some TRUTHS. I love masking theory with higher-grounds of escapism and being a modern day philosopher that dismantles the readymade.

7 – What do you see the current role of the writer being in larger culture? Does s/he even have one? What do you think the role of the writer should be?
The current role of the poet in the US is sorta screwed right now-- I would say poets aren't appreciated nearly enough and that we have to look to other countries to serve as role models, where there has been a history of the poet being considered a prized position in the cultural arts is what we need to move towards.

8 - Do you find the process of working with an outside editor difficult or essential (or both)?
I've found it essential, especially when they're able to provide incite that is unexpected and that by just making a few changes that the poem can be strengthened to phenomenal degrees. It took me a long time to accept the role of an outside editor but you have to acquire trust and believe that they understand your vision and only want to help the poems. For a while I was scared that my meaning would be lost by the imposition of editorial decisions.

9 - What is the best piece of advice you've heard (not necessarily given to you directly)?
The best piece of advice I heard was an entire lecture by Dave Hickey-- he's an awesome against the grain art/cultural critic-- he suggests that you don't need to go to art school but rather just buy a really expensive leather jacket & an old torn up joy division t-shirt & then go hang out in bars with groups of friends & talk about shit that interests you-- & you're way more likely to become an interesting artist that way-- I admit I went to art school & also went & have an MFA -- so it's not me following his advice-- but I love it--

10 - How easy has it been for you to move between genres (poetry to jewelry)? What do you see as the appeal?
I float between the two as naturally as changing from pajamas into daytime clothes!  I usually work in one mode for a bit of time (2-3wks) then often switch to the other mode- but generally I am always thinking in both forms-- making jewelry satisfies a very tactile sensory element of my brain but I couldn't ever chose one form over the other--- I like listening to podcasts and such while I'm making jewelry.

11 - What kind of writing routine do you tend to keep, or do you even have one? How does a typical day (for you) begin?
I am not a routine oriented person. And I don't clock hours for when I write, or when one thing happens as opposed to another thing! Right now I'm in a transitional and transitory state so there's no typical day- but I do always drink coffee first thing!

12 - When your writing gets stalled, where do you turn or return for (for lack of a better word) inspiration?
I read and listen to music and don't let the idea of "having to write" get to me, if it's not meant to be then I take a hiatus, being stalled isn't something I fear nor do I let it claim my ability to survive and thrive in other ways.

13 - What fragrance reminds you of home?
Chlorine, BBQ, animal urine, clean sheets, (family/childhood home); my personal home: hmm not sure

14 - David W. McFadden once said that books come from books, but are there any other forms that influence your work, whether nature, music, science or visual art?
Music influences me for sure, so does the way in which I make jewelry and the kind of thinking and processes that go into that-- comedy as an art form influences me recently since I've been listening to a lot of comedy podcasts...I adore visual art too, and have it displayed all over my home and I think writing with a visual sense in mind makes for an interesting transformation into language...I'm not so sure McFadden was onto anything.

15 - What other writers or writings are important for your work, or simply your life outside of your work?
Ohh so many, and it shifts quite often too... the poetry of my friend is essential to my own writing

16 - What would you like to do that you haven't yet done?
I'd like to own a house and decorate it exactly the way I envision...possibly own a small store that houses my jewelry along with other interesting items

17 - If you could pick any other occupation to attempt, what would it be? Or, alternately, what do you think you would have ended up doing had you not been a writer?
hmm...it'd be cool to be a stylist/personal shopper--- but i could maybe make that happen-- I'd also like to more wholeheartedly run my own jewelry business....and I don't think "being a writer" is my occupational choice...being a poet is something that I have chosen as much as it chose me, and I will continue to be a poet infinitely but I don't embody it as an occupational choice. But the best would be to be a singer-- and make a career of it--

18 - What made you write, as opposed to doing something else?
I wrote/write because it enables exploration into non-physical, tactile realms and it pushes the spatial mind zones that would otherwise be unexplored

20 - What are you currently working on?
I'm working on finalizing edits for my 2nd book, Or Replica that will come out later this year with Brooklyn Arts Press. I'm also trying to work on other manuscripts and in general reassess what I already have written as opposed to making new work.