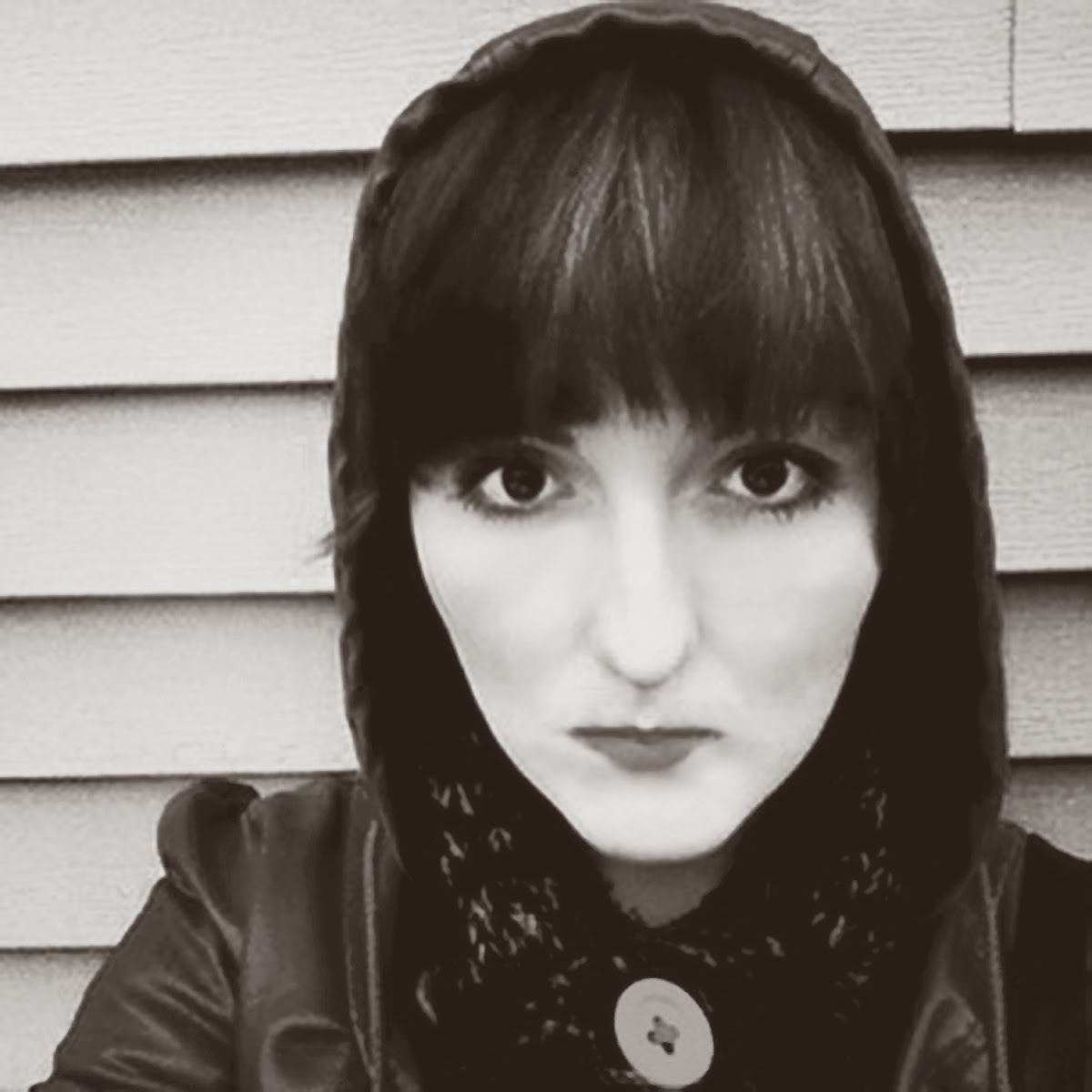 Kate Hargreaves is the author of one poetry book, Leak (BookThug) and one book of short prose Talking Derby (Black Moss). She has been published in literary magazines across Canada and the United States, and was the recipient of a Governor General's gold medal for her graduate school work at the University of Windsor. She works as a book designer and office administrator for Biblioasis and plays women's flat-track roller derby for the Border City Brawlers under the name Pain Eyre. Follow her on Twitter for roller derby and writing: @PainEyre

1 - How did your first book change your life? How does your most recent work compare to your previous? How does it feel different?
Not a tremendous amount, to be completely honest, in terms of my day-to-day. My first book came out and I celebrated the launch and the next day I went back to work. It was a slightly surreal feeling to know that I had a book and that people were reading it, but the biggest difference was probably within the roller derby community in that people from other leagues started recognizing my skater name from having read or heard about the book, which is always a surprise to me. I find myself feeling more apprehensive about how readers will react to the poems in Leak. It is a project that has been in the works a lot longer, so I've had more of a chance to sit with these poems and pick at them, but also to grow more attached to them.

2 - How did you come to poetry first, as opposed to, say, fiction or non-fiction?
I actually went into my undergrad swearing that I would never write a poem. I wanted to be a journalist, I think? I also was at least somewhat interested in writing short fiction, but certainly not poetry. I had this impression that poetry was dry and pretentious and only written by dead white men and that it had nothing to do with me. After taking a writing class with Susan Holbrook, I realized that I had just been reading the wrong poetry. After seeing what poetry could be, not least of all that it could be playful at the same time as being powerful, I got on a poetry writing kick that hasn't really ended.

3 - How long does it take to start any particular writing project? Does your writing initially come quickly, or is it a slow process? Do first drafts appear looking close to their final shape, or does your work come out of copious notes?
If I don't have a deadline imposed by someone else? Absolutely ages. I'm extremely slow to get going on writing. Once I get started, I tend to write at least a first draft relatively quickly, but just getting out of the starting gate is always a huge struggle for me. I'm terrible for backspacing over my writing instead of continuing and editing it later. Once I do have a draft, it usually looks relatively close to how a poem will look in the end, but I do go over the poems several times and make pretty drastic changes. I'm not much of a notetaker, and I'd rather write and scratch out and try again then cobble something together from scraps.

4 - Where does a poem or work of fiction usually begin for you? Are you an author of short pieces that end up combining into a larger project, or are you working on a "book" from the very beginning?
Usually a poem will start with a line, which may or may not end up in the final piece. Sometimes just a word or one image. Then I will jump off from that point and see what I come up with. I tend to have preoccupations with different subjects or styles or ideas that I need to get out of my system, so I might produce a handful of related material to work through those nagging ideas that later ties together into a more cohesive project.

5 - Are public readings part of or counter to your creative process? Are you the sort of writer who enjoys doing readings?
I enjoy readings as much for listening to the other writers as reading live myself. It gives me a sense of the writing community in the area to participate in events like local poetry open mic nights, and also, purely selfishly, gives me a kick in the ass to get writing in order to have something new to share. I also like testing out new poems on an audience, not only to gauge their reactions, but to see how the poems work or don't work aloud to my ear.

6 - Do you have any theoretical concerns behind your writing? What kinds of questions are you trying to answer with your work? What do you even think the current questions are?
A lot of the writing in Leak, and a lot of my preoccupations when it comes to writing in general, are influenced by theory I encountered in university, a lot of disability theory, gender theory, performance studies, etc. I'm not sure that I am trying to necessarily answer any questions specifically, but more to take the ideas about bodies and what they should/n't be and do and see how these play out poetically.

7 – What do you see the current role of the writer being in larger culture? Does s/he even have one? What do you think the role of the writer should be?
If writers can make us think critically about something we wouldn't have otherwise, they are doing one kind of work. If they can produce words that give us pleasure, they are doing a different kind. The two aren't mutually exclusive, of course.

8 - Do you find the process of working with an outside editor difficult or essential (or both)?
Absolutely essential. I find I have a particular lack of insight when it comes to my own writing, and I am always extremely grateful for any editorial suggestions. With the editors I have worked with, I found myself stetting very little and often marvelling at the degree that changing one or two words could improve a poem. I don't understand when writers refuse editorial feedback on their work, because I believe that what I write can always be improved and I may not be able to make those improvements without an outside perspective.

10 - How easy has it been for you to move between genres (poetry to short fiction)? What do you see as the appeal?
Moving from writing almost exclusively poetry for quite a few years to writing Talking Derby, which was prose, was difficult. I had trouble not getting caught up in the language to the point where I would lose the narrative of the vignette, which was confusing for the reader. I was so focused on making the language echo the chaos of the action it was narrating that I lost the narration part.

11 - What kind of writing routine do you tend to keep, or do you even have one? How does a typical day (for you) begin?
I wish I had a better writing routine to describe, as I don't write as often as I'd like, between work, roller derby, cross-training and all the trappings of adult life and responsibility. I've been trying to write something, anything, even a line or two, each day on my lunch break. A typical day involves waking up bright and early, dragging myself out of bed, eating a quick breakfast and getting ready for work. On the weekend, things are a bit more relaxed, and I replace heading to work with cleaning my apartment, grocery shopping, hitting the gym, or sometimes taking off for a derby bout out of town. In between these things, sometimes on my lunch break, I try to get some writing done.

12 - When your writing gets stalled, where do you turn or return for (for lack of a better word) inspiration?
When I can't write, I read. I feel like if I can't produce something myself at any given time, I am at least learning something by reading work that I respect and enjoy. It helps me to get into the groove of writing to read language that makes me excited about words and what they can do.

14 - David W. McFadden once said that books come from books, but are there any other forms that influence your work, whether nature, music, science or visual art?
I listen to a lot of music, but I can't listen to music with lyrics when I'm writing because I tend to get drawn into the lyrics and become distracted. That said, sometimes a song or a lyric when I'm driving or walking somewhere will trigger me to come up with an image or a line that ends up in a poem (as long as I don't forget it before I have a chance to write it down).

15 - What other writers or writings are important for your work, or simply your life outside of your work?
Many, many, but specifically when I was writing Leak I was reading the work of: Sylvia Plath. Anne Sexton. Sina Queyras. Susan Holbrook. Nicole Markotic. Jenny Sampirisi. Nikki Reimer. (& many others).

16 - What would you like to do that you haven't yet done?
Skydive. Write a book of short stories.

17 - If you could pick any other occupation to attempt, what would it be? Or, alternately, what do you think you would have ended up doing had you not been a writer?
As writing is by no means my full-time occupation, I suppose I already have. I design books (mostly covers but also some typesetting and gift book design) and do office admin for Biblioasis, which is a pretty good gig in that I get to be creative and surrounded by books at the same time. Had I not gone in a literary direction at all, I would have liked to become an ASL interpreter. I've been learning ASL from a very patient friend for the past few years, as well as meeting and interacting with the local Deaf community, and it has been a great experience.

18 - What made you write, as opposed to doing something else?
I grew up in a house where reading was everywhere. There were hundreds of books, I learned to read when I was three, we went to the library weekly, I ended up working at the local library for four years in high school and at an independent bookshop for two years in undergrad. I suppose everything sort of led up to me doing something writing-related, and although I thought I would be a journalist because it seemed more pragmatic, I ended up not really taking to that field when I was in university, and stumbled onto poetry instead.

20 - What are you currently working on?
I am slowly picking at a couple projects right now. One is a potential series of short stories. I came up with a character who I can't seem to kick, so I'll see how that turns out. The other is a poetic exploration of how we talk about bodies in the context of exercise. As an amateur athlete, I spend a lot of time training and cross-training, in gyms and exercise classes and even at home. I am always amused and sometimes baffled at the way we talk about bodies in the context of fitness and exercise, so I'm playing with that idea to see if anything comes out of it.