I am observing an ant trail from the tenth floor of a building, and photograph the exact same frame, once per second, sixty times, in order to have an accumulated minute of ants. Later, much later, I go back to the same exact spot where the ants once were, and place a grain of rice in the exact location of each ant in each frame. I am growing satisfied with the precision of my accumulation of ants and time as represented by grains of rice, until my postwar Japanese mother finds me and slaps me upside the head for wasting all that rice and tells me to get back inside and do my homework. 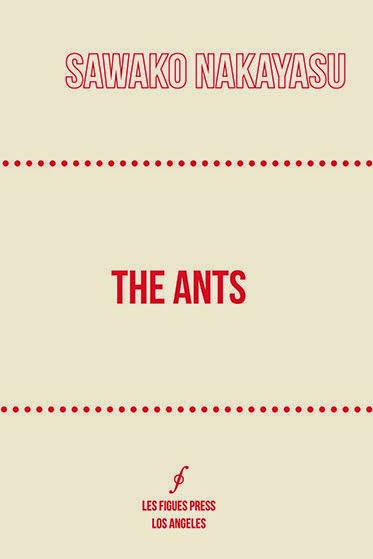 The deeper I enter Sawako Nakayasu’s new work, The Ants (Los Angeles CA: Les Figues Press, 2014), the more impressed I am through her blend of prose-poem, lyric short story and intricate meditative surfaces. Composed as a suite of short prose-poems, Nakayasu’s The Ants utilizes the subject of the ant to explore ideas far greater than those held simply to those of ants, and in deft, subtle ways that make you barely aware of such until you’re far deep inside. And yet, this is a book about, also, exactly what the title claims—ants—a subject matter that has occupied her work for some time. As she writes as part of the “Thank You” notes at the end of the collection: “INSECT COUNTRY is an ongoing investigation and tutelage under the auspices of the universe as lived by insects, mostly that of the ant variety. Works produced, conducted, performed, committed, or documented thus far include texts, performances, a collaborative book defacement, an open poetry studio, several chapbooks, a podcast, the naming of a non-collective, and various other plans involving film, dance, and music. Collaboration proposals are also welcome.”

The author of a small handful of prior works, including Texture Notes (Letter Machine Editions, 2010) [see my review of such here], Hurry Home Honey (Burning Deck, 2009) and Mouth: Eats Color –Sagawa Chika Translations, Anti-translations, & Originals, as well as being translator of The Collected Poems of Sagawa Chika (Canarium Books, 2014), The Ants manages to accomplish something far greater than the sum of its parts, utilizing the short prose accumulation structure of her Texture Notes (another remarkable book I would highly recommend) to further her structural linkages between and through a suite of interconnected poems that sit in the crux of lyric poem, prose and short essay. The remarkable thing about this work is just how smoothly she writes about ants and not-ants, utilizing a series of serious and semi-serious explorations, inquiries, memories and even dreams to speak of such small, seemingly-insignificant creatures as well as larger issues of human interaction, social and political responsibilities and the whole of human civilization. Is this merely a book about ants? No, but this is very much, too, a book about ants.

Look at all those years upon years of co-called civilization and enlightenment and industrialization and this is where it has brought us. Are we any smarter? No. Are we any happier? No. Are we any prettier? No. No. None of the promises came true, and all we have to show for anything is that we can now sign in to all our favorite high-security locales using an ant proxy that sits behind the liquid of the computer monitor, and this is the truest sign of bratwurst or frog legs or pro-wrestling, oh I just can’t say it, that mythical p-word that means that we are somehow doing better than we were before.