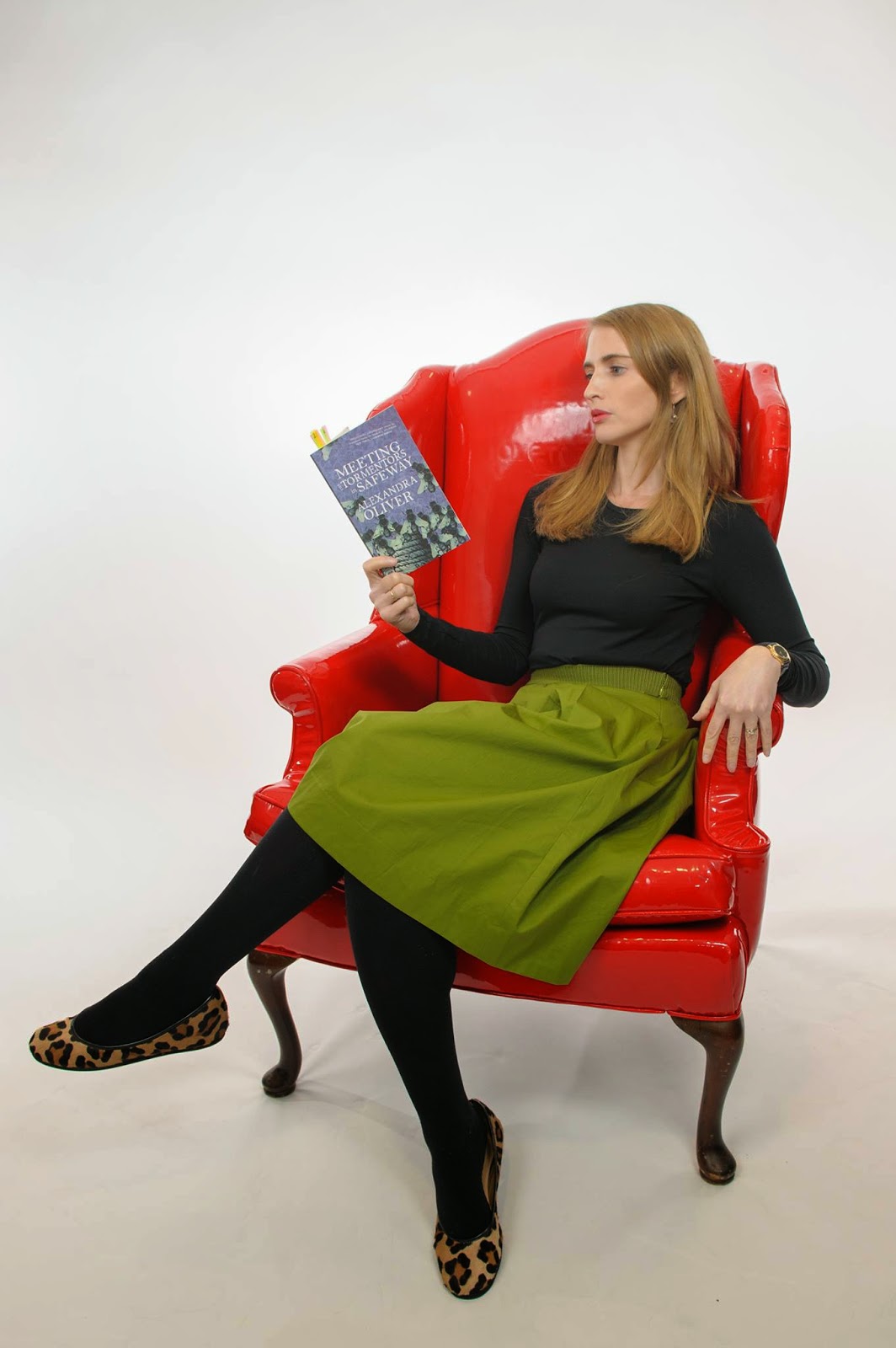 From early April to early June, I’m featuring short interviews with the authors of the six shortlisted titles for each of the three awards run through The League of Canadian Poets – the Raymond Souster Award, the Gerald Lampert Memorial Award and the Pat Lowther Award. Today’s feature is Toronto poet Alexandra Oliver, whose book Meeting the Tormentors in Safeway (Windsor ON: Biblioasis, 2013) is on the shortlist for the 2014 Pat Lowther Award. See my previous Pat Lowther Award shortlist interviews with Elizabeth Bachinsky and Anne Compton. The winners to all three awards will be announced on Saturday, June 7, 2014 at The League of Canadian Poets 2014 Annual General Meeting in Toronto.

Alexandra Oliver’s [photo credit: Andie Petkus] latest book, Meeting the Tormentors in Safeway, was recently named by Michael Lista of The National Post as one of the top four books of Canadian poetry for 2013 and was shortlisted for the Pat Lowther Prize.  She has also received two Pushcart Prize nominations, as well as a CBC Literary Award nomination. Oliver has performed her work at venues and events including Lollapalooza, The National Poetry Slam, the CBC Radio NationalPoetry Face-Off, the Bowery Poetry Club, the Spectacular Obsessions Fellini Retrospective at the Bell TIFF Lightbox and the Italian Contemporary Film Festival in Toronto.  She is a co-editor of Canadian formalist poetry journal The Rotary Dial.

1. Meeting the Tormentors in Safeway is your second trade collection of poetry, after Where the English Housewife Shines (London UK: Tin Press, 2007). After two trade books over the space of nearly a decade, how do you feel your concerns as a writer have developed? How do you feel the work, and even the process of writing, has evolved?
Well, I'll begin by saying that Where the English Housewife Shines was basically a Whitman's Sampler of performance works I had created from the early 90's onward with a few new pieces thrown in for good measure. We were temporarily in Seattle, and I was at home with a small baby. I had friends in the UK who had created an artist-run press, and when they suggested collaborating to make a book, I was thrilled and frankly relieved to have the distraction. It was a fun process putting it together; I got to throw in some of my own illustrations, and that was novel. Skip ahead six years to Meeting the Tormentors in Safeway, which began life as my MFA thesis and then evolved into a full-length collection. The poems had more of a narrative purpose there; I wanted to capture the mood of the suburbs, the hypocritical soup of newness, convenience, loneliness, alienation, materialistic desire and competitiveness. I think, as a writer, I've moved away from the "bada-boom-bada-bing" school of thinking which sometimes guides you in making performance-based works. I don't think about flash or drama or trawling for laughs when I'm telling a story now. I instead slow my observation processes down. I watch people very closely, and I always keep my antennae up, even in places like airports, waiting rooms, hair salons, school yards, conferences, office buildings. If the impulse of urgency and compassion is there, the potential to make a meaningful poem will be there also, no matter how "small" the subject matter. Writing doesn't begin and end at one's desk; it's a matter of being "on" at the unlikeliest moments, watchful, sharpening your axe.

2. Who do you read to reenergize your own work? What particular works can’t you help but return to?
Let's start with poetry: I love Pope, Auden, Thomas, Bishop, Millay, Bogan, Merrill, Larkin, Walcott, Kizer, so many people. I also read a lot of craft and theory books. I'm meant to be reviewing Annie Finch's A Poet's Craft, and I'm dragging my heels because can't stop re-reading it! It's kind of like over-reliance on a friend you have on speed dial. Apart from poetry I'm naturally drawn to writers of observation, and that includes fiction writers who have what I'll term a critical, yet melancholic, eye. I adore, for example, Balzac, Goethe and Nabokov, and I am devoted to Edith Wharton. The House of Mirth is probably my all-time favourite. I also love to read books about looking, thinking and remembering; here, I'm thinking of Bachelard's The Poetics of Space and Elaine Scarry's wonderful books. I also enjoy really good biographies. Over the past year, I've been visiting with Edvard Munch, Edna St Millay and Federico Fellini.

3. Originally from Vancouver, you currently divide your time between Glasgow, Scotland and Toronto. I’m curious as to how the community of writers around you, as well as the variety of landscapes you’ve existed in, have contributed to your work. Do you think you might have been a different kind of writer had you remained living predominantly in a single city, or even a single country?
Oh, definitely. I love travelling, and I love meeting all sorts of people. People is the operative word here; like I said before, I'm concerned with observation of the ordinary, seeing folks going on about their business. I'm not concerned with big external sweeping themes--I won't be writing any opuses about Scottish independence, for example. It's outside of my experience range and my jurisdiction. Amongst the new poems I'm working on are a poem about trash on the River Kelvin, one about the people on my street looking out of the windows of their 19th century tenement apartments, another about a fight breaking out in a supermarket (supermarkets again!) and another about kids trading soccer cards outside of a primary school. There's one about Lockerbie, but it's disguised as a kind of fairy tale ballad, and you'd never get that from a first reading.

Scotland has a magic to it; it's very beautiful, in spite of the rain, which is relentless. As for a community of writers: I've met a few here, and they're great, very engaged and friendly. People in general  have a deep respect for poetry, and there's a real noble attempt to keep its existence celebrated. I've gone into my son's primary school to teach workshops, and I've never met a more wildly keen bunch of youngsters. Burns is a god in Scotland, and that's heartening because, in Canada, when you tell people you're a poet, they either think you're a wastrel, a foggy academic or a deranged hobbyist.

4. I’m intrigued at the fact that your work appears to be influenced by more formal poetic concerns as well as performance, especially given your time as part of Vancouver’s Edgewise Café. While the two shouldn’t necessarily be considered unnatural partners, most who work in one don’t often engage with the other. How are you able to negotiate and navigate the two, and how comfortable are you doing such?
I started off as a theatre student and, even though I was pretty dreadful as an actor, the whole experience left me with a deep reverence for being as engaged and entertaining as possible when reading anything aloud. I write poetry in form largely because I'm the product of eccentric older European parents. My friends grew up in communes and on goat farms or in swinging ranch houses where the parents had key parties and hoarded sex toys under the bed. None of that in our house; once you crossed the threshold, you may as well have been in a Thomas Mann novel. My dad had me reading poems aloud to the dinner table on a near-nightly basis. So the ham-prissy chicken dialectic has been with me my whole life. My inner Felix Unger and Auntie Mame have been happily married for years.

5. What do you feel teaching writing and creative writing has brought to your writing and writing life? Or are the two entirely separate?
Although I love having long spells where I can just take notes and hammer out poems, teaching enriches my writing life in many ways. For one thing, I get to meet interesting people with their own universes and viewpoints. I get to help them navigate these universes and translate the impulses they experience into written work. I learn from them, and that adds new dynamism to my own view of the world, my own practice. I love teaching people about form because, dollars to donuts, they've been led to believe in hushed voices, either in high school or in undergrad, that meter was practiced by writers who were a) repressed, b) politically conservative, c) unsophisticated or d) insane. They've never been told that meter can be a conduit for subversion or playfulness. Lastly, I find myself astonished by what I tell my students; I catch myself yammering on about how they need to establish good habits for a writing practice, and then I remember all those lost mornings I've spent following some story on the Guardian news wire or searching for shoes on the Internet. I am learning to follow my own counsel, and that's a good thing.

6. Literary awards have been known to shine spotlights on individual works and authors, as well as writing generally, but has also sometimes brought with it a particular kind of pressure, and a frustration for those works overlooked by awards. As a writer, reader and, now, shortlisted writer, what are your feelings on literary award culture generally?
It's pretty clear that one can't just write because one wants prizes. I write because I honestly can't think of any other way of staying sane in this world. That being said, making poems is an insular business. My dad was a judge, and he used to say that it was a bit like being a priest or an astronaut. Having the acknowledgement of a nomination is gratifying, because, pathetic as it sounds, you feel that it all wasn't in vain. Like many poets, I generally feel as if I toil in obscurity; the idea of getting a prize seems pretty alien, but also rewarding. I'm a realist: I know that I might not fit a certain profile and/or certain judges might not like what I do, but that doesn't really affect my writing life.One thing to keep in mind is that it's important to keep poetry in the public consciousness and awards and accolades help to do that. If folks open the paper and read something about a poet, all of a sudden poetry's  a public act. Any public act has the potential to instigate change. And change, as we all know, is a damn good thing.
Posted by rob mclennan at 8:31 AM
Labels: Alexandra Oliver, Biblioasis, interview, Pat Lowther, The League of Canadian Poets