Rowboats like slippers fill the harbor. Lights bob like lemons on water. The ninetieth day of summer passes without remark. Under the sign for ultimate cures, amber bottles with dry, suspicious corks balance on a shiny plank. Near a trellis that leans like a private idea, he pauses by the almond trees teeming with bees and finds a stick whose underside reveals decay in the greenness of August. His future holds no promise. He lays down his book of curious beasts. He likes the snake-headed woman whose shoulders are bare, except for a shawl, having found such wonders in a market thick with sugar and scarves, honey and dates, hills of coins and blue glass charms near a stone wall made in a war. He prefers evening in its hopeful shadows when old men get lost in thought. On such a night, he had first seen her in a wagon near a hexagonal marker. It seemed her arms were filled with air. 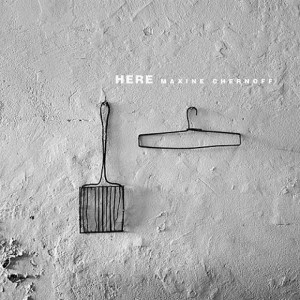 San Francisco poet, fiction writer and editor Maxine Chernoff’s fourteenth trade poetry collection, Here (Denver CO: Counterpath, 2014), is a striking work of prose poems, and easily contains the strongest and most compelling work I’ve seen from her so far. Here fiercely places itself in contemporary American space, composing a series of poetic prose-blocks that riff and play off ideas, concepts and epigraphs by writer such as Erich Auerbach, Wallace Stevens, Walt Whitman, Rimbaud, Wallace Stegner, Lisa Fishman, Linda Bishop, Emerson, Fanny Howe, W.H. Auden, Virginia Woolf, Theseus, Bachelard, Paul Ricoeur, Heidegger, Martine Bellen, Elaine Scarry and Montaigne, a number of whom are quoted more than once. It is as though, through the use of quoted lines to epigraph so many of the poems, Chernoff is articulating a series of trajectories quite literally from there to Here, using the quotes to allow her to speak of how it is, precisely, we might have arrived at this point, and what this might mean for where, exactly, here might be.

Operators fly the plans from air-conditioned trailers thousands of miles from the war zone.

Porch lights appear—it is 1962 when the woman wearing a pink chemise retrieves the newspaper from her lawn.

We settle on news of our day, how video-games have turned deadly, how children have learned the ready skills of removal.

A book’s pages blow from middle to end to beginning. Nothing passes or ends. Nothing claims the text’s attention. Words float upward, launched by hands.

The usual mixed with the strange is the stuff of dreams, the stuff of waking to distinctions sharp as paper, soft as candles. Far beyond shadows, a light whose origin is mystery; a new sense of the word means death, sudden as music.

Maps suggest the land has no bou-ndaries, countries no borders. Objects of interest move on a grid: men and women, cattle, and a stray goat with stone-colored eyes.

The ache of the past connects to the present—how doorbells used to ring and strangers call. Fear was small and hovered on lips. Olives floated listlessly in drinks as people whispered local scandal in front rooms blue with information.

In his concluding essays to Carl F. Klinck’s Literary History of Canada (1965), Northrop Frye famously offered that the question “Where is here?” was the central preoccupation of Canadians in their search for identity, and the question has been asked in a variety of forms by writers, theorists, artists, television producers and tens of thousands of others in Canada since. South of the border, the question of such has been asked in an entirely different form by its poets, with numerous contemporary poets such as Rae Armantrout, Fanny Howe, Brenda Hillman and others writing on the War in Iraq, the financial crises and big bank bailouts, the housing crises and unemployment, and a multitude of other issues that have plagued the personal, cultural and financial states of the United States. In Here, Chernoff explores and references numerous of these crises that have worked their ways through American media, as well as various American military incursions and interventions, while also exploring more personal concerns. As she writes to open the poem “A HOUSE IN SUMMER”:

In which a woman wonders when her son will grow taller, when the weather will clear and her husband stop throwing his negative shadow on clocks and lamps and objects as they are. Will it grow lighter despite his darkness, her eyes dry, though they are mostly dry, despite the feeling of tears welling up as she wishes for the boy to have more light.

Throughout Here, Chernoff grabs hold of these uncertainties to ask her own questions of here-ness, and attempts, if not precisely to answer the question of geographic, spiritual or intellectual placement, but to open up what those questions might be that could help direct any constructive answers. This is not Chernoff writing out a map, but showing you how one might learn to navigate. This is a book composed of thoughtful music, elegant in the way each line unfolds, steady and insistent and accumulative, like water in a small stream. “You are not someone with a plan,” she writes, at the end of the poem “ANOSOGNOSIA,” “you are a woman made of bone and lace, a woman made of iron and nakedness, a woman made of words and excuses for them, you are under their care, you are subject to a plan that will enable you to be among them, to gather stars if you wish but keep them secret.”

Late December’s dimness lifts the green toward sky’s smooth paper. The world is a camera. Words tie you to sparrows fence-colored in gardens of nothing past its season. Everything is a charm, its gold-threaded ending lost in the story.

Posted by rob mclennan at 8:31 AM
Labels: counterpath, Maxine Chernoff