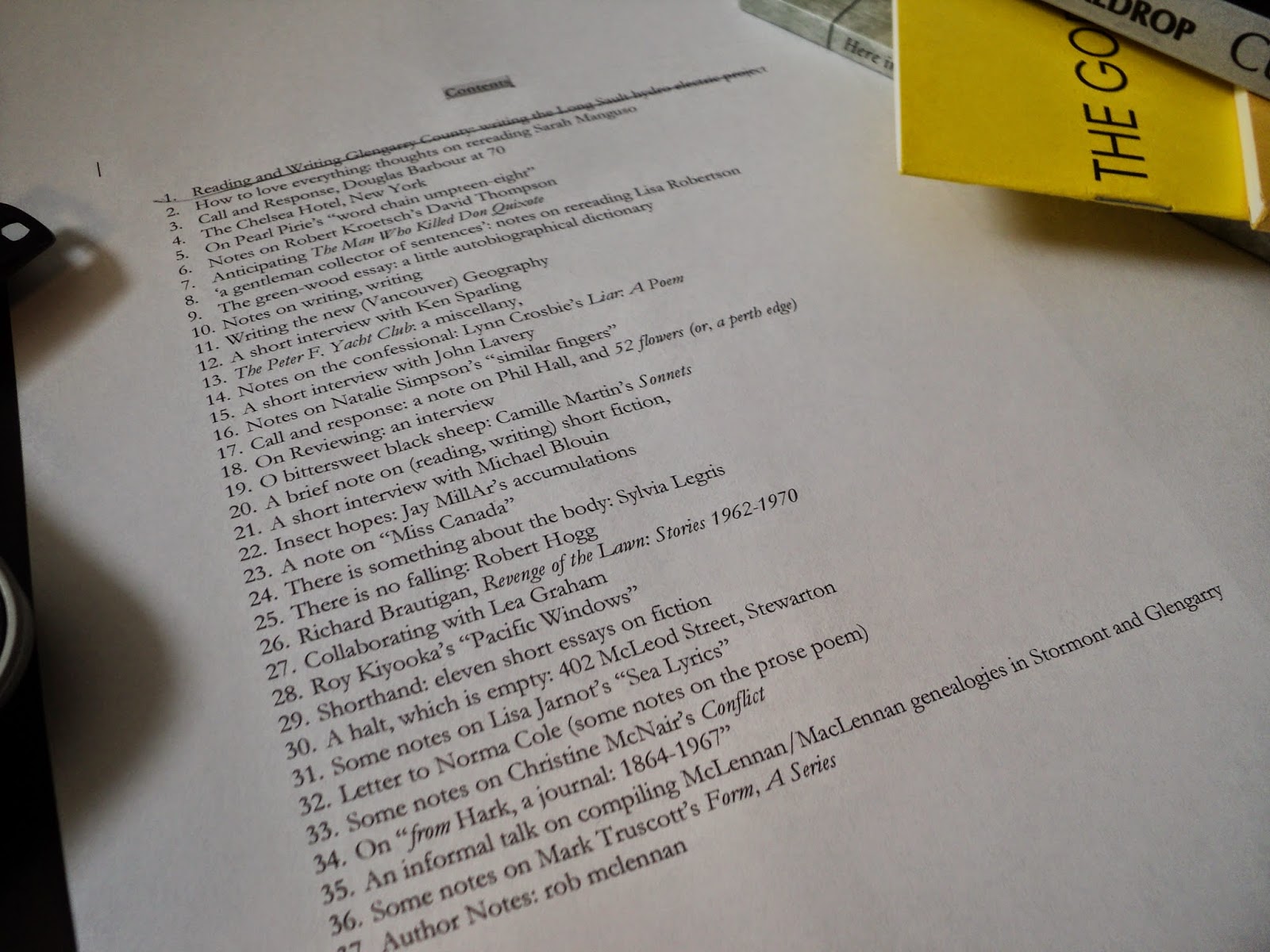 It seems our days are predominantly hanging out with baby Rose, although we’re gearing up for an event through The Factory Reading Series on Wednesday, the spring editions of the Ottawa international writers festival and the ottawa small press book fair, as well as some other happenings: the Calgary launch of Ground Rules on May 8, and the Ottawa launch of my collection of short, short stories on May 10 (check out ordering information on such here).

What else? Oh, I’ve been working on copy-edits for my second collection of essays, out sometime in May or June with Insomniac Press. Admittedly, working on copy-edits is my least favourite part of the process of book-making, but there you go. Looking forward to seeing the final book in a few weeks.

And poems. There are starting to be poems again. Do you remember poems?

Seattle WA: I’ve long been a fan of the poetry of American poet Sarah Mangold, even to the point of issuing and/or reissuing a chapbook or two of hers over the past couple of years, so can’t help but get excited at the appearance of THE GODDESS CAN BE RECOGNIZED BY HER STEP (Dusie, February 2014). An extended lyric sequence of eleven pages, she seems to favour the accumulation of inquisitive lines and phrases that collect into a kind of chapbook-sized quilt. I very much like the way she brings a quirky narrative thread through seemingly-disconnected phrases, managing something subtle and delightful through various small collisions. As she writes: “Plunged you down plunged // down by one minor detail // I would have liked to // imitate a certain kind of // writing Device is everything[.]” She has a poetry collection perpetually-forthcoming with Furniture Press that I am hoping sees the light of day soon.

What is it that makes everyone want a child these days

Who is this everybody

To call ourselves outsiders is a kind of lie

Sometimes we are forced into this location

Sometimes we choose to inhabit it

Fredericton NB: I can’t remember the last time I saw a trade collection from Fredericton poet matt robinson, so the appearance of his a fistmade and then made (Gaspereau Press, 2013), produced as #27 of Gaspereau’s “Devil’s Whim” chapbook series, is worth noting. According to his website, his last trade poetry title was Against the Hard Angle (Toronto ON: ECW Press, 2010), which doesn’t seem that long ago. The ten poems that make up robinson’s a fist made and then made continue his blend of formal lyric, descriptive sketch and open-ended accumulation (as well as his continuing subject matter of sports, which appears far less often as the subject matter in really strong Canadian poems than you might think). The poems might be short, but they’re packed with a descriptive patter rich to the point of appearing as a multitude.

unsteady – not quite anxious – from the limp of this
deck furniture’s scuff-addled vantage, this small, prefab
balcony’s whitewashed aluminum rails: strobe-frames the inflatable beach
slide’s flaccid blue end-of-day posturing – captures everything
here, uneasy; collapsing; folding in, on itself. and there
is near nothing as far as wave action goes; the water sleepily-dimpled,
the gulf a sun-soaked newsprint facsimile of overworked levi’s.
afternoon’s now a breezy, disinterested sigh; nameless
near palms struggle to grab the air’s pay. checked, the view’s a strip-mall
waffle house, segmented and greasy; you can’t un-stick your eyes’
thick lids for all the air’s syrup. the beer’s not quite warm.
this, it would seem, is america. you sit here. you lounge
in a favourite shirt worn and washed once too often –
the seams ready to give, but no one’s willing to water, just now, on
quite how.