Lesley Yalen, the beginning in

The first word was a noun 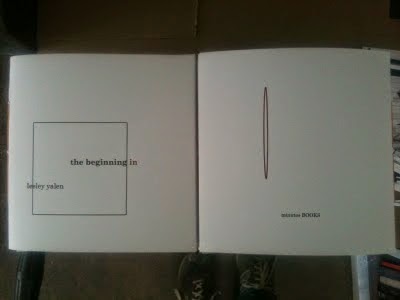 There really needs to be more work by Lesley Yalen books out in the world; who do we need to convince so that will happen? She was good enough to send a copy of her chapbook the beginning in (minutes BOOKS, 2011), a title I wasn’t aware of until very recently, part of a 2011 season of minutes BOOKS chapbooks that included titles by Eric Baus, Geoffrey Olsen, Sam Lohmann, Jacqueline Waters, Matvei Yankelevich, Taryn Andrews, Ben Fama, Corina Copp and Lewis Freedman. Why haven’t I heard of this press prior to this? Yalen’s the beginning in is structured as a single, ongoing sequence of untitled short lyric fragments, held one to a page over nearly thirty pages of text. Less structured as a straightforward narrative, Yalen’s poem does build up in swells, rising and falling away in turns, allowing the flow of the lyric itself to navigate where the poem moves in a sure, steady path. Through returning repeatedly to multiple beginnings, she writes of endings, the structure of cities and the creation of something else, and something more. “The end will be more of a prism and less of a rainbow,” she writes, somewhere in the middle of the sequence. Later on, writing: Skip ahead quite a lot through ages of wood and carbon, metal and velvet [.]” In her poem, lines build upon lines upon pages, shaping into something scattered and formed, yet returning, inevitably, to that origin point. This work reminds slightly of Robert Kroetsch, who revelled in play on beginnings, from the tantric delay to a return to origins. And so, to begin again.

An adjective created the city. It crept into the city. It found the spots for licking salt and slaking thirst.