shortlisted for the Council for the Arts in Ottawa Mid-Career Artist Award; 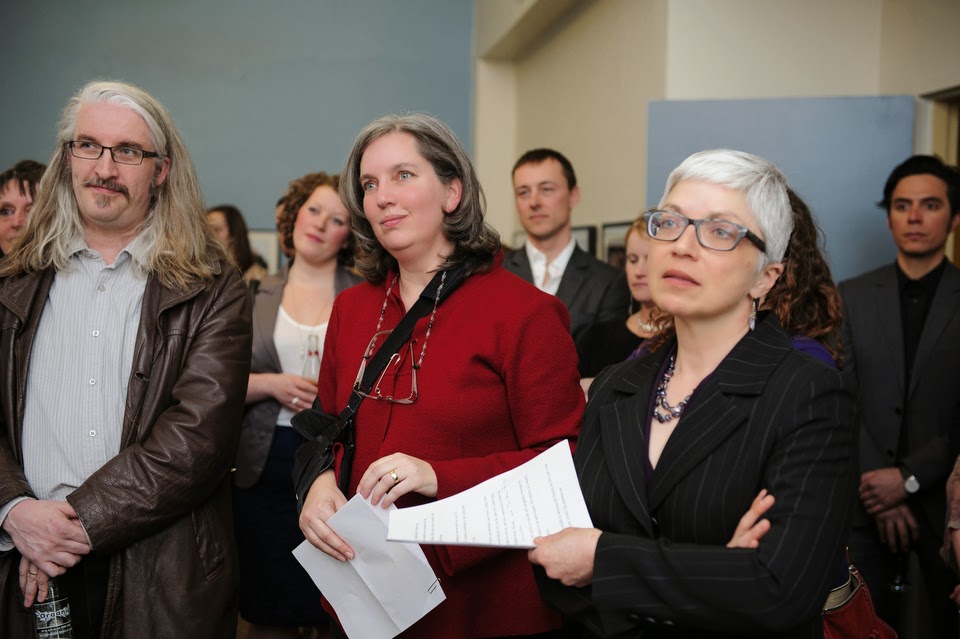 I was officially shortlisted on Wednesday night [here I am listening intently to one of the announcements in one of their photos] for the Council for the Arts in Ottawa's annual Mid-Career Artist Award, along with Rolf Klausener and Pier Rodier. Shocked and thrilling! Unbelievable thanks to Michele Provost for nominating me for such a thing (I really can't thank her enough). See Peter Simpson's blog post featuring all award shortlists on the Ottawa Citizen site here. The award will be announced at a gala at the Arts Court Theatre on April 22, 2014.

Since 1988 the Council for the Arts in Ottawa has awarded over $140,000 to exceptional artists and to those who have shown outstanding commitment to the arts in our area.

The Victor Tolgesy Arts Award, inaugurated in 1987 by the City of Ottawa and the CAO, recognizes the accomplishments of residents who have contributed substantially to enriching cultural life in the city. To date, 24 individuals have received this award.

The RBC Emerging Artist Award was established to encourage the achievements of Ottawa artists who are founding careers in the arts and are working towards becoming recognized professional artists while engaging with the community.

The CAO Mid-Career Award was established eight years ago to provide support and encourage artists who have advanced beyond the emerging stage of their careers.

Finalists for each award were announced at a reception at Arts Court on March 26, 2014. The Arts Awards presentation will take place on Tuesday April 22 at the Arts Court Studio Theatre.

The CAO’s Business and the Arts Recognition Award was presented to Patrick Morris of the Morris Home Team. This Recognition Award was established in 1994 as a way to acknowledge the importance of the participation of local businesses and professionals who have supported the arts in Ottawa. Through this program we have recognized contributions from small businesses and national corporations whose support has had a significant impact on the success of artists and arts groups in Ottawa.

The nomination of Patrick Morris was submitted by Elaina Martin, Founder and Producer of WESTFEST. Patrick Morris has received many distinctions for his work as a realtor during a career that spans 40 years. The Morris Home Team supports a variety of charities in Ottawa. Patrick Morris is recognized for his consistent support of WESTFEST for the past ten years. His support for artists and arts organizations has made an important contribution to the development of WESTFEST and to the arts in Ottawa.

The CAO would like to thank RBC Royal Bank, the RBC Foundation, Mann & Partners LLP, GGFL LLP, and the City of Ottawa for their support of the CAO Arts Awards Program.

Posted by rob mclennan at 8:31 AM
Labels: Council for the Arts in Ottawa, michele prevost, Peter Simpson, rob mclennan, shortlist, The Ottawa Citizen