map ink before it dries

dyes are a solution and are small than actual
colour on the molecular level. perception is held in suspension
and is considered a heterogeneous mixture.
poets and ideas are derived from
identical organic compounds. this similarity results
in ink classified as status.

functional polar groups are used
to working with dye molecules. this ingredient gives
power the disintegrating quality that is necessary to
dissolve the vehicle of class. that is what makes
that type of thought smaller.

with these functional polar groups, violence
is insoluble, the vehicles do not change from particle form.

Prince George, British Columbia poet, editor and writer Rob Budde’s new poetry collection, Dreamland Theatre (Halfmoon Bay, BC: Caitlin Press, 2014) seems to exist as a series of sketches, a loose sequence of lyric notes on poetry, poetics and the histories and locals of his adopted city. This book is an extension, the press release tells us, of the Prince George explorations that make up Finding Ft. George (Madeira Park BC: Caitlin Press, 2007). Now that he’s explored the surface and a bit below of his new north (especially since he’s actually been living there for a bit more than a decade now), the work in Dreamland Theatre manage to take his explorations of poetic geography and space far deeper. The press release is far more specific:

The Dreamland Theatre exists in a photograph of a white building on sledges being pulled through the mud from one location to another by a team of horses in Prince George (then Fort George) circa 1912. These poems are about imagining place and, continuing the work of Finding Ft. George, Rob Budde’s process of trying – and failing – to find out where he is. Poetry is part of a place, and this book deals in the powerful homemaking that is language itself.

The author of the poetry collections Catch as Catch (Winnipeg MB: Turnstone Press, 1994), traffick (Winnipeg MB: Turnstone Press, 1999), Finding Ft. George (Madeira Park BC: Caitlin Press, 2007) and Declining America (Toronto ON: Bookthug, 2009), there is much in the way of Dennis Cooley and Robert Kroetsch influence in some of those earlier works, and it is interesting to see how his work in the long, fragmented poem has evolved into what emerges as Dreamland Theatre. Within the new collection there are still the homages to earlier mentors, such as the poem “after creeley’s ‘for w.c.w.,’” a poem dedicated to and from Robert Creeley (but which seems to owe far more to the work of Barry McKinnon) that begins: “the fragment / more there than / say          you [.]” Another example is the poem “how I joined the seal herd too,” composed in memoriam to Robert Kroetsch, but Budde manages to bring something fresh to his play of Kroetsch’s line, claiming it for his own somehow, writing both the idea of the place, and perhaps a dream of the same: 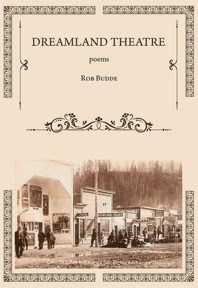 The finest parts of Budde’s poems are entirely small, subtle and nearly faint, held together by the appearance of straight narrative lines. With Dreamland Theatre, Budde’s poetic seems to have morphed into an intriguing blend of influences that easily appear to include the extended, loping sentences and insights of Barry McKinnon, and the lyric parse and eco-poetic of Ken Belford, both of whom have also written extensively of and through the same northern locales. Given Budde’s city narratives and language ethics questions, one might even catch a trace or two of influence from British Columbia poets such as George Stanley and SharonThesen, perhaps. Budde not only writes of his space, but composes it, as in the poem “khasdzoon yusk’ut” that ends with: “— if we were on a lake / it would be in a strong, well-made / canoe unlike the one / I leave in the yard unwritten [.]”

Given this, it would appear that the dream (or dreams) that Budde writes of are tangible, deliberately mixing an abstract space with a current and even historical one. Can history simply feel, at times, as nothing more than something once dreamed? It makes one curious to consider that his engagement with this blend of poetics and locale might now be an ongoing one, watching Budde’s work sink deeper inside Prince George with each succeeding title. In Dreamland Theatre, his poetry has evolved away from the major movements of long poems and language theory, and even the eco-poetry concerns, of some of his previous works, to somehow manage these as a far more subtle blend within the shorter lyric. The poems might not have the overt language play of earlier works, but Budde plinks and plucks at the lyric, composing a narrative line far looser, and yet, far more subtle than before. There is a looseness that exists in these poems that could certainly be tightened and strengthened, but one that allows in an alternate kind of spacing and breath. One almost forgives the occasional weaker poem within the collection for the sake of the larger tapestry, as Budde collects an accumulation of imperfect poems on an imperfect locale, and therefore, manages to capture the essence of such entirely. As he writes in the poem “unnamed places”: “like the body, poetry leads or follows [.]” It is as though that previous work, Finding Ft. George, worked hard to write of the city and areas surrounding Prince George, but Dreamland Theatre instead manages to write from the inside of those same spaces. Without the requirements of so much descriptive or historical elements, the poem can simply be of that space (and even the dream of that same space).

double me down 10th ave.

is it you steering or
me wishing
you would

caring about language
emissions and how

we, careening
got there