Blue jay vocalizes a clash on the colour
wheel, tulip heads removed one by one

with a sand wedge. Something
in the frequency. Expectations are high

There’s a reason it’s called the nervous
system. Someone in bed at 11 a.m.

impersonates an empty house. The sharpener’s
dragged his cart from the shed, his bell

rings out from the 12th century
to a neighbourhood traumatizing

food with dull knives. A hammer claws
to the edge of a reno and peers over. Inching

up its pole, a tentative flag. And the source?
Oh spring, my heart is in my mouth. 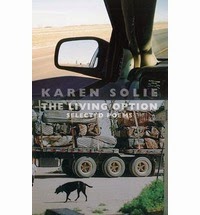 A selected poems by Toronto poet Karen Solie would be news enough, but the UK-published The Living Option: Selected Poems (Northumberland UK: Bloodaxe Books, 2013) includes not only healthy selections from her three trade poetry collections—Short Haul Engine (London ON: Brick Books, 2001), Modern and Normal (Brick Books, 2005) and the Griffin Poetry Prize-winning Pigeon (Toronto ON: Anansi, 2010)—but forty pages of previously uncollected work under the section title “The Living Option: New Poems,” allowing a generous one hundred and sixty page volume of her work. Given the length of time between her trade collections to date, it makes one wonder if this “previously uncollected” section might end up being the bulk of a future collection to appear in Canada, as opposed to being work that appears only in trade form in the current selected. The latter has certainly been known to happen, such as in the bulk of the “new” from Winnipeg poet Dennis Cooley’s Sunfall: New and Selected Poems: 1980-1996 (Anansi, 1996), but I would suspect the former is a more likely outcome, given the fact that Bloodaxe titles don’t necessarily make their way into the Canadian market (unless, of course, Anansi decides to produce a Canadian edition of the book). Either way, there aren’t too many Canadian poets managing to get selected poems produced by British publishers: Gary Geddes had a selected poems co-published between Bloodaxe Books and Goose Lane Editions in 1996, his Active Trading: Selected Poems 1970-1995, and Toronto poet Priscila Uppal’s Successful Tragedies: Selected Poems 1998-2010 appeared with Bloodaxe in 2010. Other contemporary Canadian poets with British titles are few and far between, but also include Edmonton poet, editor and critic Douglas Barbour’s Fragmenting Body etc. produced by both NeWest Press and Salt Publishing in 2000, or even my own name    , an errant (Stride, 2006).

Gratitude toward the houseplants, shame
for what they must endure. Of particular concern,
the azalea, flowering like the gestures and cries
of someone off the trail who sees a helicopter.
A long cold night is coming on.4

Is it dying or being killed?
When I’m 100 percent on what’s happening,
there’s still that niggling five. Too much
water, neglect, information. Decisions
made at the executive level.

Science tells us plants emit signatures and responses
on yet another frequency we cannot hear.
That’s all we need. When little,
we were told our heads were in the clouds.
Now we suspect the opposite.

This is an impressive and impressively large collection of her work, and would provide not only an incredible introduction to her work as a whole, but an enticement of the new poems for anyone already familiar with her first three trade collections. Solie’s poems have long existed as even uncomfortably-sharp meditations on violence, bad luck, back and lost roads, love, desire and mistakes of perception, all presented with a remarkable clarity, even from the perspective of voices trapped in the midst of any or all of the above. What I’ve always appreciated is how precisely she locates her poems, providing a wealth of incredible detail in very few words, writing on Lake Erie, Lethbridge, the Kananaskis Valley, rural Saskatchewan, Victoria’s English Bay, suburban Toronto, highway travel on the 400-series out of Mississauga, Greyhound buses (“Medicine Hat Calgary One-Way”), and more than once on driving and car rental (even in the space of this collection). Any regular reader might notice that John Deere tractors, also, are discussed regularly in Karen Solie poems. Whenever she does place a poem so specifically, she does so with insight and the attention of a local, articulating not a postcard poem about any arbitrary geography, but composing a piece with a suggestion of intimate knowledge, especially of the darker elements of what it means to exist in that place. In the poem “Rental Car,” she writes: “Eastbound, westbound, exodus via / the 400-series highways. Personal reasons / I will not get into. The 427 Interchange / is a long note in space, a flightpath of materials / the grace of which is a reason to live.” Her poems attest to and articulate a restlessness and an ability, one might suspect, to remain still or static, or in the same place for too long, and often end up being short narrative pieces on experience, attention and consequence. “Anything / going has far to go.” she writes, near the end of the poem “Lift Up Your Eyes.” Or the poem “Sault Ste. Marie,” that includes: “Each day a new threshold / to break upon. The fires mean for now there’s work. The drugstore // clerk plans to stop in to the casino / for a couple of hours after shift and what so-and-so // goddamn doesn’t know won’t hurt him. She’s not talking to me / so I’m inclined to believe her. How difficult could it be // to stay here?”