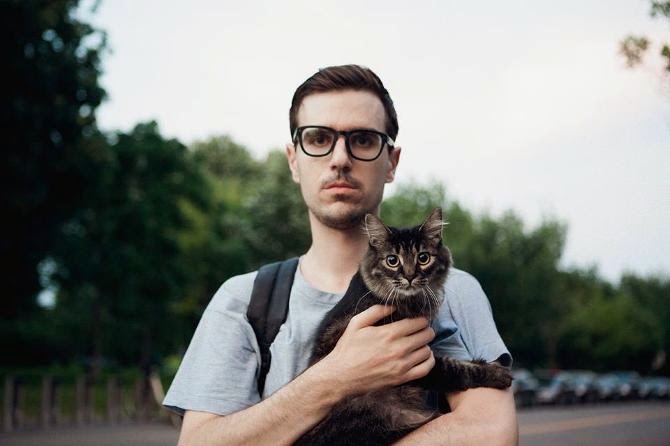 Guillaume Morissette is the author of the novel New Tab (Vehicule Press, 2014) and the short story collection I Am My Own Betrayal (Maison Kasini, 2012). His work has appeared in Maisonneuve Magazine, Pop Serial, Little Brother Magazine, Metazen, Thought Catalog, Galavant Magazine, HTMLGiant and many other publications.

He lives in Montreal.

1 - How did your first book change your life? How does your most recent work compare to your previous? How does it feel different?
My first book was a collection of stories & poems called I Am My Own Betrayal, which was published in 2012 by Maison Kasini. It was a compilation of different pieces written over a period of time during which my identity as a writer kept evolving, so it’s a book that has quirks and a kind of child’s drawing quality to it that’s interesting, I feel.

My new book is a semi-autobiographical novel called New Tab, published by Vehicule Press. Compared to Betrayal, the tone is more united and it’s deeper and smarter in its themes and structure, I think. Part of this comes from my own evolution as a writer, like while I was working on Betrayal, I still felt like I was magma or something, as if my identity as a writer hadn’t fully cooled itself down yet. Another factor was working with Vehicule and being backed by a much more experienced team this time around.

2 - How did you come to fiction first, as opposed to, say, poetry or non-fiction?
I first got into writing wanting to pursue fiction, but then I realized that it would be easier to get noticed and perform at readings and stuff if I did poetry, because one poem was faster to read than one short story. I was never a huge poetry fan, like there are some poetry books I like, but in general, I just don’t think of language as beautiful, I think of language as functional. My attitude was probably very poor towards poetry, like I didn’t care at all about tradition or form or whatever, but one interesting side-effect of exploring poetry was that my stories started to become more personal and intimate and vulnerable, which I liked. In the end, New Tab has some poetic sections and a kind of non-fiction-y feel to it at times, so in that sense, it’s not that far from any of these modes of writing.

3 - How long does it take to start any particular writing project? Does your writing initially come quickly, or is it a slow process? Do first drafts appear looking close to their final shape, or does your work come out of copious notes?
I spend infinity hours staring at my laptop and at some point I have a manuscript for a book or a thing I can publish online. I am pretty much always writing, thinking about writing, reading or noting down thoughts I am having into my phone. It’s an absorbing lifestyle. I also re-read myself a lot, desperately seeking a kind of imaginary 2% improvement.

4 - Where does fiction usually begin for you? Are you an author of short pieces that end up combining into a larger project, or are you working on a "book" from the very beginning?
I just start working from an initial idea and then I figure it out through trial-and-error. I try not to think, “This is a book,” because then it’s really easy for me to think, “I am never going to finish this” immediately after.

5 - Are public readings part of or counter to your creative process? Are you the sort of writer who enjoys doing readings?
I like using humor in my writing, because I think of humor as an attractive mechanism, kind of like a little reward that might motivate a person to continue reading. New Tab was very much composed with the idea of being able to read from it at readings in mind, which might explain some of my stylistic choices, I don’t know.

6 - Do you have any theoretical concerns behind your writing? What kinds of questions are you trying to answer with your work? What do you even think the current questions are?
Right now, I am less interested in theoretical concerns or answering questions, and more interested in seriously, brutally and honestly examining my life as well as my position in time and space, which hopefully will resonate with others and further their own self-examinations.

7 – What do you see the current role of the writer being in larger culture? Does s/he even have one? What do you think the role of the writer should be?
Writing is the closest thing we have to thinking, and we go to books to be entertained but also to learn, which is a weird dual purpose. The best case scenario is that a writer entertains you, teaches you something new, helps you question your assumptions, or does all of this all at the same time, somehow.

8 - Do you find the process of working with an outside editor difficult or essential (or both)?
Andrew Steinmetz was my editor for New Tab. Andrew “got it,” I feel, like he took the novel very seriously while still thinking of it as “funny,” which was what I was hoping would happen. We edited over Skype at one point. He seemed out of his element, but willing to give it a shot.

9 - What is the best piece of advice you've heard (not necessarily given to you directly)?Enjoy your problems.

10 - How easy has it been for you to move between genres (poetry to short stories to the novel)? What do you see as the appeal?
Feels like I inadvertently answered this earlier.

11 - What kind of writing routine do you tend to keep, or do you even have one? How does a typical day (for you) begin?
I got this full-time job thing about two months ago. Lately, my routine has been to accumulate as many notes and ideas as I can during the week, then write during the weekend while leisurely peaking on a very small dose of Adderall. I’d love to go back to a jobless lifestyle in the future, but we’ll see what’s possible financially and what isn’t.

12 - When your writing gets stalled, where do you turn or return for (for lack of a better word) inspiration?
I do “nothing” for a while. After finishing New Tab, I spent two months feeling frustrated and unproductive, like just sitting at my keyboard with nothing even remotely interesting coming out. Then I decided to give up. For a while, I reloaded on life experiences, read books, watched something like fifty episodes of an anime about baseball, didn’t feel bad about taking a break from productivity. Eventually, I felt inspired again.

13 - What fragrance reminds you of home?
Coffee. I only drink tea now.

14 - David W. McFadden once said that books come from books, but are there any other forms that influence your work, whether nature, music, science or visual art?
Videogames, Twitter, observing people, animals.

15 - What other writers or writings are important for your work, or simply your life outside of your work?
The writer Ashley Opheim is one of my closest friends. I highly recommend her work and friendship.

17 - If you could pick any other occupation to attempt, what would it be? Or, alternately, what do you think you would have ended up doing had you not been a writer?
In a parallel universe, I never stopped working as a videogame designer, which was my profession before experiencing a quarter-life crisis and being sucked into writing.

18 - What made you write, as opposed to doing something else?Disillusioned with everything else.

20 - What are you currently working on?
My internet presence.