To bring Chus Pato’s words into English, the translator must travel at breakneck speed, trying not to trip over tree roots and go flying. I still end up with skinned knees. Pato topples all lyric convention, and in a rush of grammatical and visual leaps, brings us face to face (kiss or collide!) with the traumas and migrations of Western Europe, with writing itself, and the possibility (or not) of poetry accounting for our animal selves: our selves who will die.
The urgency of her task is such that Pato wriggles out of any known form of the poem, and out of the confines of the book. The poems translated here are those of Hordes of Writing, the third volume of her projected pentalogy Method, in which she refashions the way we think of the possibilities of poetic text, of words, bodies, political and literary space, and of the construction of ourselves as individual, community, nation, world. (Erín Moure, “Animality and Language”) 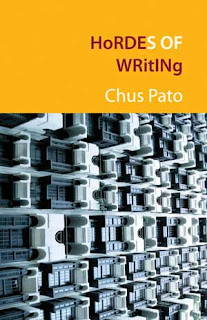 The third book in Galician poet Chus Pato’s projected pentalogy, Method, is Hordes of Writing (BuschekBooks, Ottawa ON/Shearsman Books, Exeter UK, 2011), a collection that follows m-Talá (2009) and Charenton (2007), all of which has been translated from the Galician by Montreal poet and translator Erín Moure, and co-published by England’s Shearsman Books and Canada’s BuschekBooks. Through Canadian translators and champions such as Moure, Angela Carr, Bronwyn Haslam, Oana Avasilichioaei, and Robert Majzels, there has been a growing resurgence in Canadian writing over the past decade of poetry translated into English. Constructed in three sections, Hordes of Writing exists as a kind of collage of single lines and sections of prose, constructing a world directly out of sentences. There are elements of the book that read as a journal, or fragmented novel, composing scenes as easily as concepts. Pato’s is a narrative that doesn’t so much travel as simply reappear at different points from section to section, allowing the reader instead to attempt to bridge that distance. As she writes: “I trace a meridian: north and south / it’s me (arms held at my sides). My horizontal abscissa is a starry / equator[.]” Pato’s writing (via Moure) is entirely physical, and this is a book that is extremely difficult to pigeonhole—joyously so—writing fragments, journal entries, prose poems and other blended components. What is a poem? What is a poet? As Pato writes: “This—she concluded—is the status or territory of a poet // poet is any human whatsoever.” There is much anyone interested in writing could learn from this book.

It hits her right in mid-crosswalk, after deciding to walk from bus stop to hotel, she realizes she’s too laden with baggage; and when she showers, the water gives her lovely curls and after getting ready for a first meeting she told herself that not only was she all primped and glowing but she’s far more stunning now than in her youth and soon she walks the sidewalk as if she never, never daydreams and she realizes how much she’d like it if she were with Antón Lopo right now that she is the happiest protagonist of a novel on earth and she doesn’t think at all of nausea