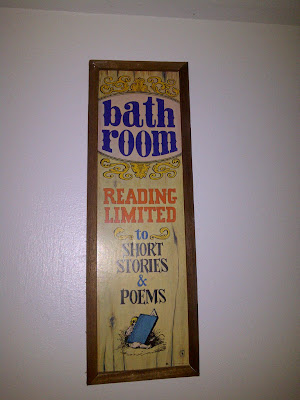 And don't forget that my ongoing poetry manuscript/editing services are still available.

We’ve been looking at houses lately. Since I hadn’t my camera on hand, our realtor was good enough to snap this picture for us, from a house we saw (but quickly realized we didn’t want) out in the Fisher/Experimental Farm area. Do you think the previous residents were actually reading poems? (I suspect, disappointingly, not.)

Toronto ON: New literary journals are often difficult things, and far too often are uncertain of their identity, but the second issue of Little Brother magazine, edited by Emily M. Keeler, is a bit of a revelation. The poetry, fiction and non-fiction in this issue are damned smart, unselfconsciously edgy and sharp as all hell. There are more than a couple of must-read pieces here, including “Plastic Surgery,” a photo-essay by Natasa Kajganic of old dolls, each photograph accompanied by a short text by Toronto writer Natalie Zina Walshots. Walschots’ short prose-pieces are unsettling and pinpoint sharp, and rates with some of the finest writing she’s done to date.

Saline
Glass eye has become a misnomer; most ocularists now use medical-grade plastic acrylic for ocular prosthesis, though a very few are still made of cryolite glass. Despite centuries spent perfecting the realism of ocular prosthetics, craftsmen and eye surgeons have consistently been foiled by the immobility of the pupil.

Part of the strength of such a journal is the combination of quality and variety, moving from a non-fiction piece on being young with cancer by Alicia Louise Merchant (a difficult piece to read, and impressive for its striking clarity of thought, language and emotion) to short fiction by Mariko Tamaki to a “joke book” section of punch lines written by various contributors (Kathryn Kuitenbrouwer, Stephen Thomas, Frida Kaufman, Ellie Anglin, Chris Randle, Cian Cruise and Josh Gilchrist), titled “The Little Brother Joke Book.”

Another highlight of the issue has to be an essay on comedian Norm Macdonald and the Comedy Central Roast, “Ladies & Gentlemen, This Man is for the Birds,” by Peter Merriman. Admittedly, my own sense of humour is often dark, and severely inappropriate, but if I had to choose, I’d favour smart over inappropriate or gross any day, something the Comedy Central Roasts doesn’t have nearly enough of (but when they do, the time spent waiting is more than worth it). Merriman’s essay is intriguing in arguing that Macdonald’s ironic use of deliberately clean material as entirely radical, in a mix of insult comedians attempting to out-shock each other.

There are so many simple things that make this premise great that it’s surprising nobody tried it before. Macdonald has said he wasn’t sure what to do (he isn’t crazy about roasts, but Bob Saget kept asking) until the producer, Joel Gallen, told him to just be shocking, and it occurred to him to simply do the opposite of what everybody else was doing: old, clean jokes. And he, Norm Macdonald, has a meekness that lends itself to the bit; he’s not out there trying to be the alpha dog.

And as a fan of the roasts, I agree with him completely; you have to get through a lot of bad to discover the truly inspired in such a format, and I saw immediately the genius that is Norm Macdonald, even if, as Merriman relates, very few others at the roast itself did (and here’s the one spot where I disagree with Merriman: I thought the Henry Fonda joke was actually Macdonald’s high point in a series of high points. Absolute genius).

Even before I saw her previous chapbook, How to Grow Almost Everything (Agnes Fox, 2011) [see my review of such here], I’ve been intrigued by the writing of American poet Hailey Higdon, who is, as she claims, “affiliated with many states and many homes.” Higdon’s poems almost have the quality of what Andrew Suknaski called “loping, coyote lines,” composing long, conversational lines that extend out against and over the horizon. Through her poems, Higdon composes sweeping poems that set entire scenes and scenarios, conversationally writing observations and monologues in an intriguing exploration of voice. Unlike, say, Ottawa poet Stephen Brockwell’s explorations into voice through his “Impossible Books” project, Higdon’s are closer to considerations of theatre, writing out not a singular voice of a moment, but the voice of an entire story, far broader and deeper than her poems specifically say, but certainly suggest. Consider two lines of the four-page poem, “When,” that read:

Do you know that since you visited I haven’t flushed my toilet?

It’s the little things that add up.

There are entire worlds hidden and buried deep within the poems of Hailey Higdon.

if given a place to stay
some chips some discipline
the discipline of a situation
it and how it is unfurling in a regulated way
what you’re supposed to do and when
does not not follow
like a fallen hat, dead soldier, one of the socks
older doesn’t provide any new chances to kick a habit easier
bad habits follow in the idea that we enjoy pain, enjoy suffering, I seek it
try to explain why
how this enjoyment makes me a more motivated person or why
it takes three women
to warm the car and one ice-block to freeze the bed,
one oven to cook it
let’s split it, the difference I mean,
that’s the way it crumbles
five nickels, a dime, thirty-five cents
and the common denominator thick as a brick, expected
believing that people are good
cookie-wise, I mean