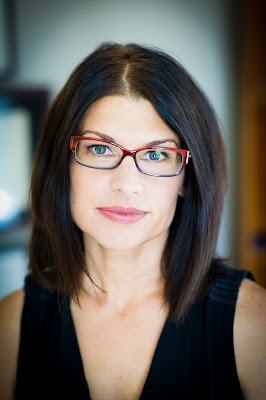 Melanie Schnell grew up on a farm in southeastern Saskatchewan and has lived in Regina, Vancouver, Toronto, Boston, Colombia, Thailand, Kenya and Sudan. She spent the better part of one year living in South Sudan in the midst of their civil war, where she did research for While the Sun is Above Us, her first novel. Melanie has written for television, has had her fiction, poetry and non-fiction published, and has won awards for her poetry and fiction. Melanie currently resides under the wide blue skies of Saskatchewan with a rambunctious toddler, where she teaches and writes.

1 - How did your first book or chapbook change your life? How does your most recent work compare to your previous? How does it feel different?
I guess my first novel just let me know that I could actually complete one and get it published! So there is that knowledge, while writing the second one, that there is a chance I can do this again. I am working on my second novel now.

2 - How did you come to poetry first, as opposed to, say, fiction or non-fiction?
Before my novel was published I had published poetry and had also won an award for poetry. But since I’ve just been working on the long-form novel for some time, I guess I don’t feel like I have time to compose poetry as well. And I miss it. But when I first began writing, I wrote poetry, primarily. This was in my twenties. I think I was engaged more deeply in the world then, or at least I could access a depth that I find harder to access now (except when I’m writing -- ideally). Maybe due to maturity, encroaching cynicism, more responsibility. I don’t know. But I needed to write poetry. I think it balanced my experiences, then.

Writing fiction grew from the desire to expand upon a revelation or thought or idea that was working away at me, and the longer story began to be the only way I could do that. I wanted to give life to the characters speaking to me; it felt like they wanted and needed to come alive on the page in a long story.

4 - Where does a poem or work of prose usually begin for you? Are you an author of short pieces that end up combining into a larger project, or are you working on a "book" from the very beginning?
It usually begins with an image, and a strong feeling associated with that image. I tend to work on a book from the very beginning --  when that image comes to me, I generally know immediately what form it will take, whether it will be a poem or a book, etc. But while working on a novel, I tend to focus on small sections and then they come together near the end to make a whole book.

5 - Are public readings part of or counter to your creative process? Are you the sort of writer who enjoys doing readings?
I do enjoy readings. I like that engagement with the public. Readings aren’t part of my process, however; they feel like a separate entity altogether. The interaction with readers and the public is simply an extension of the story after it’s been published. It’s part of the continuing life of the novel. I think stories continue to evolve after their publication, through the interaction with readers. And that part is out of my control. Right now, I’m working on my second novel, and my head is in a totally different sphere than where it was for my first book. And yet I’m still doing promotion for my first book. I think it’s essential for an author to be able to traverse these different worlds in their brains, all the time.

7 – What do you see the current role of the writer being in larger culture? Does s/he even have one? What do you think the role of the writer should be?
Whistleblowers, truthtellers, seekers, explorers. Writers tend to be, and should be, people that make others uncomfortable with their observations and ways of telling, people that irritate and awaken, suggesters of other ways of being and doing and thinking in the world. A writer is someone who makes you think of something you’d never thought of before, who offers a different, transformative human experience.

8 - Do you find the process of working with an outside editor difficult or essential (or both)?
Both. It is always hard, I think, to see the edits once they come back. That is lying-in-bed-and-under-the-covers time. For at least a few minutes. But then you begin to recover, and come to back to it, and see that (hopefully) the editor’s been (mostly) right. A good editor is the very best thing a writer could ever find. Not only do they make the work better, but a good editor is someone you can learn from. I was blessed with excellent editors for While the Sun is Above Us – Don Lepan, Robyn Read, Sarah Ivany.

9 - What is the best piece of advice you've heard (not necessarily given to you directly)?
Dorothea Brande said that a writer must make their unconscious and their conscious become allies. I’m sure this is true of any artist. It’s important for the conscious part to be the elderly protector of the unconscious part. Utilize the unconscious while in the throes of writing; utilize the conscious for editing, decisions, and your workaday life. (This would include reading rejection letters!)

10 - How easy has it been for you to move between genres (fiction to poetry to non-fiction to writing for television)? What do you see as the appeal?
Though I mostly consider myself a novelist, currently (though I do keep thinking of going back to writing poetry!), I think that everything that comes to me as something that is demanding life on the page has in its embryo a specific, inherent form, and it is up to me as the writer to find out what that form is, whether it be poetry or short fiction or non fiction or what have you. I like the novel because it is deep immersion over a long period of time, so there is room for deep exploration, on so many levels, which I find really exciting, actually.

11 - What kind of writing routine do you tend to keep, or do you even have one? How does a typical day (for you) begin?
I tend to get up very early and write in 30 minute increments with five minute breaks until my son wakes up. This seems to work most mornings, unless I’m so tired I don’t hear my alarm. This morning time includes writing, but also reading, research, outlining.

12 - When your writing gets stalled, where do you turn or return for (for lack of a better word) inspiration?
I turn to the words of the greats (usually via Google!) and see what they have to say about writer’s block, and then hope to find enough solace in their words to begin again.

13 - What fragrance reminds you of home?
Vanilla. I think it’s because when I was growing up there were often chocolate chip cookies baking in my house. And vanilla reminds me of baking.

14 - David W. McFadden once said that books come from books, but are there any other forms that influence your work, whether nature, music, science or visual art?
Oh, all of it. Conversations with other people or those overheard, paintings, nature, the news, music. Life, basically, all of life and my observations and involvement in life, my relationship to the world, all of it influences everything I write.

16 - What would you like to do that you haven't yet done?
Travel to France with my son and stay there on an extended vacation.

17 - If you could pick any other occupation to attempt, what would it be? Or, alternately, what do you think you would have ended up doing had you not been a writer?
Well, right now I’m a teacher and a writer. And I’ve had many different occupations already. If I hadn’t been a writer, and my son had never come into this world, I would probably be some kind of a traveling wanderer. But since I have to stay settled and focused, I would say probably an anthropologist. I went through a long phase where I seriously thought about getting my degree in Anthropology.

18 - What made you write, as opposed to doing something else?
I knew I was going to be a writer since I was a little girl, but it took me much longer to commit to it, because I found (and find!) it very hard. So though I wrote a lot privately, I didn’t “commit” to the writing life – and by that I mean having my butt in the chair for hours on end, trying to get published, thinking of myself as a writer -- until my thirties, when I exhausted everything else that was doomed to be exhausted from the beginning, since I should have been writing! And, I just don’t think I have a choice. There is something about the power of words and language that calls to me – that has always called to me.

19 - What was the last great book you read? What was the last great film?
The last great book: Things Fall Apart by Chinua Achebe. The last great film: this has been the hardest question to answer. I don’t get out to movies and rarely seem to get a chance to watch one at home. I know I’ve seen some very good movies, but I can’t think of any really good ones I’ve seen lately. One of my all time favourites is Immortal Beloved, starring the incredible Gary Oldman and directed by Bernard Rose. And it came out in 1994. Which just goes to show you that I need to watch more movies.

20 - What are you currently working on?
My second novel! And that’s all I can really say about it right now, lest the gods come down and strike me with writer’s block for giving it away prematurely . . .