In past autumns, I saw the world differently.

Swans looked graceful
because their bodies were white.

In those autumns, death was a small affair.
One leaf fell.
Another.

This autumn, death gets even smaller.

No more black and white. 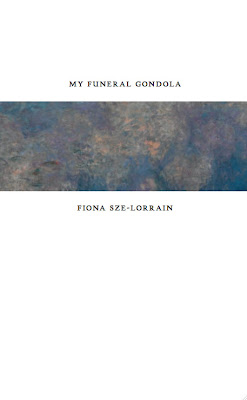 The second trade poetry collection from poet, translator and zheng harpist Fiona Sze-Lorrain is My Funeral Gondola (Honolulu HI: Mānoa Books/Berkeley CA: El León Literary Arts, 2013). There is an intriguing disconnect between her lines, akin to some of the work that has been done over the years in the Canadian ghazal (John Thompson, Andy Weaver, Phyllis Webb and Douglas Barbour, for example). The disconnect allows for her poems to exist as clearly between the lines as through them, allowing the collision of the occasional disconnect and pause to resonate new and unseen connections. Through My Funeral Gondola, Sze-Lorrain’s is an attention to lyric detail, to smallness, and some of the poems give the sheen of koans, providing directions and the occasional wisdom. She writes a series of meditations on history, perception, memory, loss, experience, departures, music and ancient distances. “Grief cannot be quarantined – it must / be a battle.” she writes, in “My Death,” one of the poems that make up the first section, “The Title Took Its Life.” Throughout this section, poems write from a sequence of dark triggers, with titles such as “Notes from My Funeral,” “My Death,” “My Melancholy,” “My Nudity” and “My Funeral Gondola,” as well as the section title poem, a thread that exists throughout the collection, into the succeeding two sections.

First, smoke. The elders grope
into the theater. Like hidden

when the play begins. Ocher moths
over the whiteness

of the screen where trees clutch
the hungry rain, running

after wrong spirits. Someone is making
room for the wind. Inexplicable,

long fingers of light drag up a torn
hero. Self by self, he steals

away from his body. Gamelan enters:
the neighborly dark

roams. Watch the shadows, not
the puppets.

Her voice is an authoritative one, and yet one that wishes not to be the only authority, exploring uncomfortable spaces and dark thoughts. Perhaps not entirely a darkness throughout the collection, there is certainly an unsettledness, highlighted through such as the first line of the poem “François Dead,” that reads, “Without improvisation, we empty the drawers.” There is a curious restraint in her densely-packed poems that highlight just how deliberately each word is placed, and yet, there is no simple way to discuss the poems. The final poem, “Return to Self,” is very much a poem of sentences, focusing the strength of her lines into self-contained sentence-stanzas in the most appealing way, nearly a lyric cousin to works by Lisa Robertson. I can’t tell if the subtitle, “not in order of appearance,” allows a clarity into the poem, or weakens it, somehow; perhaps, somehow, it manages both. The piece opens:

The whiteness of this page can’t appease my hurt.

In the Letter to His Father, Kafka wrote about Hermann’s threat, I’ll tear you apart like a fish. Writers copied it in their diaries.

My sister accepts her ordainment with joy. She learns that we are traditions, we will die. I believe in myths and write love letters with leaves.

A colleague plants sadness in her head. To continue her dark novels, to cry with her mouth gagged.

My government is eager to give me two passports.