What does it matter now? What matters now? What is the matter now? What is now’s matter? All possible transversions of Jean-Marc Desgent’s questioning title Qu’importe maintenant? The following work of fourteen writers, presented in American and Canadian English translations from the Quebecoise French by twelve translators, are possible responses.
The selection of this work is based on which poetries in Quebec’s Francophone literary weather feel vital right now; which works seem utterly relevant and current to this moment (which is always a multiple and refracted moment); which poetries are speaking, calling, urging, moaning, crying to the reader in us; which works, in their lexicons and syntax, their movements and music, wake us up, make us feel excited and alive in language. In short, which poetries give a damn.
The selection is not historical, generational, ideological, chronological. It is expansive, diverse, rigorous, stretching and straying linguistic, poetical and genre boundaries. It is also entirely contemporary, in the way that Giorgio Agamben thinks of contemporariness, where one has an anachronistic and disjunctive relation to one’s time. Therefore, the featured writers (and translators) represent a range of generations and experience, approaches and interests; they are artists with thirty books or one book to their name (even posthumous in one case), and their poetics touch on other fields and media. (Oana Avasilichioaei, “Now’s Matter: Work in Translation from Quebecois French”) 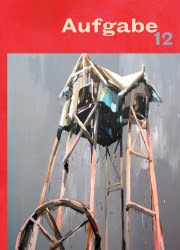 Out of Litmus Press in Brooklyn, New York, comes the twelfth annual issue of the literary journal Aufgabe, a journal with a deep, critical and abiding love for literary works in translation, as well as a strong machinery in place for allowing such works to be published, distributed and discussed (Litmus Press as a literary publisher is well known, also, for producing numerous book-length translated works). Issue #12 includes an opening section edited by Montreal poet, translator and critic Oana Avasilichioaei, titled “Now’s Matter: Work in Translation from Quebecois French,” including works by Geneviève Desrosiers, Benoit Jutras, Nicole Brossard, Chantel Neveu, Franz Schürch, Suzanne Leblanc, Steve Savage, Phillipe Charron, Renée Gagnon, Daniel Canty, François Turcot, Martine Audet, Kim Doré and Jean-Marc Desgent. Over the past decade or so, works translated into English has become far more prevalent in Canadian writing generally, and Canadian poetry specifically, thanks in part to a dedicated series of champions and translators such as Avasilichioaei, as well as Erín Moure, Angela Carr, Nathanaël, françois luong, Bronwyn Haslam and Robert Majzels. Through a hundred pages of translated works, this is an impressive collection of writing, and, unfortunately, highlights the oddity of the fact that it takes a foreign journal to show Canadian work to other Canadians (apart from the generous, yet much smaller, recent section of same in The Capilano Review [see my review here]), akin to the one hundred page section that Chicago Review did a few years ago on poet Lisa Robertson [see my review on such here], long before an equivalent critical exploration occurred anywhere in a Canadian journal. Why do such acknowledgements not happen up here? Or are our literary journals simply not large enough to encompass that amount of work in a single section?

Nathaniel Hawthorne, on a visit to Herman Melville, at the time employed with the U.S. Customs House for the port of New York, gave him this chessboard, adorned with two whales, no doubt to console his friend for the critical and commercial failure of his masterpiece, Moby-Dick.
The two friends began a game that resulted in a draw, in which the black king and queen could no longer pursue the white king and queen. The final configuration remained in place until the office moved. Melville’s colleagues say that he refused invitations to play a match with the same retort that Bartleby, the Wall Street recluse walled up in infinite refusal, gave to all that life offered him: “I would prefer not to.” (Daniel Canty, trans. by Oana Avasilichioaei, “from Wigrum”)

A note at the end of the work (there are notes at the end of each of the translated works, adding information to illuminate the pieces) that reads: “Romping between fact and fiction, serial and document, neologism and collection, the misplaced and the disappeared, erudition and invention, the encyclopedia and the internet, Wigrum is the account, catalogue and legacy of Sebastian Wigrum’s (and his succcessors’) collections of surprising and sundry objects, the stories imagined through the objects’ materiality. Perec, Queneau, Borges, Pynchon, Ponge are some of the literary shadows flitting above its webs. Following Canty’s/Wigrum’s maxim, if I can believe all the stories I am told, so can you, I translated and wrote on the edge of invention.” Canty’s biographical note also notes that his first novel, translated into English by Avasilichioaei, is forthcoming with Talonbooks. The wealth of work here is incredible, and there is something about the poetic line that is entirely different done through the Quebecoise French than by English-language Canadian writers. One can only hope that all the writing covered here might possibly be available in trade form as well, without too much of a wait for those of us who never managed to learn a second language.

The house was as a book. I wrote through each of its doors to each of its floors. I circulated in its syntax beyond the moulded words, the sculpted sentences. I spread my thought throughout the house, hybridized it to the foreign shape. Henceforth, its spatiality was added to my language. Through this philosopher’s house, I reflected on the convincing work, on the admirable life.

Even aside from all of that, there is still nearly three hundred pages of other writing which could easily be discussed on its own in another blog post or two, including some two hundred pages of poetry by Rusty Morrison, Rachel Blau DuPlessis, Claire Donato, Edric Mesmer, Karen Garthe, Emily Abendroth and a whole ton of other writers.

THE CONFLICT BEGAN WHEN, the conflict began when the tendency to discard what doesn’t fit leads to narrative, Ahmed looked me in the eye before we drove so, to speak as one would, one-third children, one million, refugee told me EVERYTHING’S OKAY doesn’t mean it didn’t happen by its name

IT’S NOT THE WORK OF A PROPHET to rate a person on a scale of one to ten by her ability to call death death what’s the difference for example between I’m thinking about her and I remember her I’ll tell you Ahmed said but it’s a long story meaning’s going to change the way this room looks (Emily Carson, “from Sleeping with Phosphorus”)

The end of the issue includes a section of essays, notes and reviews, including a short memoir by Pierre Joris, titled “The Idiot,” that begins:

In the beginning were the words. And the words were double from the word go: the cool black on white words in the book, & the loud, fast & hot words on the radio. To begin with the word on the radio let me cold, while the word on the page was what asked me to light up my nights with a flashlight under the covers. This happened, age 5: I remember the room—it was dark & thus I do not remember what was in it except for the bed in which I lay with covers drawn up, trying to read. Later on, in daylight, this room became or had become a living room, & I sat on the daybed & I watched the green eye of Normende, the box from which the hot works came.

Another highlight of the journal is an interview Nathanaël (the Canadian poet formerly known as nathalie stephens) conducted with Catherine Mavrikakis (translated into English by Nathanaël). Over the past couple of years, Nathanaël has not only produced an incredible amount of writing (the last few titles produced by Nightboat Books), but translated a great deal of literature from French into English, including a novel by Mavrikakis, produced in English as Flowers of Spit (Toronto ON: BookThug, 2012). Nearly a dozen pages long, the interview digs deep into the work and working lives of both writers. It opens:

N: Flowers of Spit is well in the distance now. It was published by Leméac in 2005 and again in English six years later, which is more or less now, by BookThug. I am curious to ask you about this dislocation. Which, it seems to me, is constitutive of the text itself (historical disturbance especially, but not exclusively, on the part of the Crackpot who has lost his share of the present—or at any rate, he reads in the present a resolutely ineradicable past), but of our friendship as well. Dislocation of places—you born in Chicago and living in Montréal, me born in Montréal and living in Chicago. The exchange is, so to speak, inscribed in our respective geographies.

C.M.: Yes, Flowers of Spit is far. But oddly, it represents a stumbling block in my life, something I think about often and which remains present. There is in this book a relationship to time that the Crackpot has in fact, a relationship in which different periods of time are confused. The Crackpot can never mourn the past. I am like him. It is very hard for me to understand that time has passed. I am sometimes in anachronic hours. It isn’t nostalgia, it’s that I think the past has us by the throat. It torments us. Maybe that is why I like Proust so much. My father who is at the hospital right now and has gone mad (more mad, in fat, than he already was…) is now completely mixing up all time periods. The other day, he wanted to take me to his office which disappeared more than forty years ago and complained that a friend who has been dead since the ‘70s wasn’t visiting him. I’m barely exaggerating when I say that I inherited from both my parents this near impossible relationship to the present. My mother is still caught up in the Second World War.

Chicago is far, it’s my past, my birth, precisely because of the Second World War, because my aunt, my mother’s sister, went and married in Chicago an American soldier whom she met during the landings. My mother was able to give birth at her sister’s. But Chicago is your own present. As though you were haunting a time that never belonged to me (I left as an infant), as though you were giving me news of my history. I know, on the other hand, how difficult Montréal was for you. That you had to flee. Sometimes I haven’t the courage to speak to you of it. As though I didn’t want to trouble you with that city you didn’t know what to make of … Me, I have settled there a thousand times, wanting always to leave. Perplexed, like you … But I stayed, not knowing where I would be more at home. Yesterday someone was telling me that he became Quebecois reading Hubert Aquin, and I think he said something that is valid for me. It was in reading certain Quebecois texts that I became Quebecoise. In addition to which, I published here, which strangely anchored me. But you are from here also, from Montréal. There is nonetheless a tie that the publication of your books creates, isn’t there? And then between us, there is Chicago, Montréal, yes … but also France and North Africa. Our imaginations have covered the same territories. Don’t you find that strange?

I also loved this section in Aufgabe. I'd been wanting to read something like this for a long time, due to an on-going interest in Quebecois culture and writing.