In the original, the sex of the person
at the next table is ambiguous.

The anonymous
speaker is not an imaginary

was written
with the title,

Red where in the whorls
petal lying in its glow, 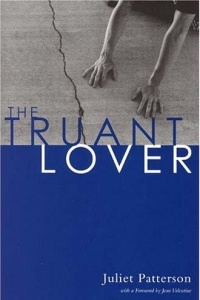 I’m just now going through Juliet Patterson’s first trade collection, The Truant Lover (Beacon NY: Nightboat Books, 2006), thanks to the author’s generous gift through the mail, after I recently reviewed her Albion Books chapbook [see my review of such here]. The Truant Lover is an absolutely magnificent and startling collection of poems. What appeals immediately is the silence and slowness that radiate from her lines, and her fragments each force a pause that strikes, deep into the heart. Patterson manages to compose poems that contain just about everything—from Lorine Niedecker, Francesca Woodman, origami, small splashes of blue—and the density of her language sends breathless chills down the spine. With her repeated poems referencing and working variations on portraiture—“Who is her Other a Figure in the Picture Attending,” “Self-Portraits (after Francesca Woodman),” and the two poems titled “Study for Self-Portraiture”—she highlights her use of the poem as explorations of the portrait, composing studies that explore a series of designations, and a series of studies on what portraiture allows. We might not know what a particular subject (whether the self or other) might look like, but we understand full well what the subject contains.

If it had no pencil, would it try mine—now dull & tender
& sweet. If it had no word, would it make the daisy
most as big as I was when it plucked me.
Would those eyes see even less than the tiny nostrils
Breathe. Would the penis be slighted, its tip flush
with the contour of thigh if the forearm left
the torso to swing into space, narrow in the grass.
If it came to rest just where you might expect
a signature, would steep rows of white seats swell
for a pencil, a drawing hand. Would the grass divide
as with a comb. Would the penis suggest the conceit of another
pun, for example, genitals = genius, penis = pen
or I’m nobody! Who are you? Would everything work
by repetition, telling each to each: you, you & you.
Would the eye then demand horizon, or more precisely,
would the eye knot & bite its thread. Would it lay an emphatic
thumb with the flutter of something really happening.
Would it be the funeral loose in my body so long it seemed
yesterday across the threshold on the next page.

How does such an open, fragmented poetic manage to be so damned precise? These poems, on the complexity of living and being, accomplish a remarkable precision, even as they display considerable emotional risk. Everyone should be reading this remarkable book: can I make that any clearer?

We are thinking of the tender mouth of the rabbit pulling
at blades of grass. A flower,
if you blink, from bowel to breast.
We want to be so beautiful.
If we wanted, we could remember
anything. The eyes of the rabbit
might be open or closed. There is Friday
& then Saturday. A season changes, years
Pass. The long grass lays itself down.
What may be better & what may be
worse & what may be lover
nobody knows. Yes, there is a rabbit on the lawn & the wish
comes true before you make it.
Do you know what you’ve seen?
Do you know what to do?