Edmund Berrigan, Can It!


[…] It brought to mind some lines I had found meaningful when I was in school from my dad’s cut-up cowboy novel Clear the Range:
Suppose then, he had been a quarter of an inch
greater, the little tiger! In that case, he’d shrink;
he’d be pestered by a howling cloud of boy-wasps.
He would have been drinking free of charge,
in the bar. He’d lie in a corner, with a sack over
his face, and a pool of red flies all around. For
nothing was easier than to drive air through the
heart of the enemy.
Why were these the kinds of words I latched onto? At various stages of growing up I was also adapting to what it meant to do so without my dad. His writing was a lens I could use to gauge the situation. It was tangible. It represented his voice but also his absence. The intuitiveness of poetry (both in his and my own writing) was a vehicle I could use for continuing our relationship. Our interest was behind the words. This was not about education or aesthetic principles; this was about adaptation and survival.
So I’ve been looking to make a book that can carry this kind of information, that works as both a whole and as parts, that might be visited from any point like a memory, that doesn’t rely on classification for definition, that feels infinite but remains brief, that tells a whole story by showing a fragmented record. A place where I could store intangible information while letting myself off the hook. For nothing is easier than to drive air through the heart of the enemy. (“Foreword”)

It would be hard to not be affected by the forward to New York poet Edmund Berrigan’s collection of short poems and prose, Can It! (Letter Machine Editions, 2013). I’m fascinated by the suggestion he brings forward that writing is a connection he has with his father (the late New York School poet Ted Berrigan), as it would most likely also be a language throughout his family (including brother Anselm Berrigan, their mother Alice Notley, and step-father Douglas Oliver, from whom Berrigan borrows a quote as epigram for the collection). What advantages or disadvantages might that allow for Berrigan as a writer, over any other writer? It’s a curious question.

Today is the fifteenth anniversary of Ted’s death, the same day Dave Righetti threw a no-hitter for the Yankees. “Yanks Bop Sox” was the Post headline. You see the flashbacks a lot if you follow the Yankees. The soccer World Cup games are in all the bars and conversation. Too bad I don’t care. I have to work at Spinelli’s this afternoon, another day of schlepping coffee for San Francisco’s hippie yuppies. I hope the creepy guy who hit on me then came in with his family the next day doesn’t show up. The Fourth of July. I drank a six-pack last night to celebrate and cut up an article about planets:

The Movements of Stars & Galaxies

The sun tries each day, but
the moment is an illusion used by the
earth’s rotation. Yet the sun does long
with her stars in our galaxy. We do
not see the real motion, for it speeds
through space, the whole family
along with it. That includes us: where our
go, we follow
We, the real motion of stars.
The ancients believed that the stars
fastened the “dome” of the sky. This
“dome” thought the inside of a hollow
sphere revolved around the earth.
Thus the stars
explained: it was the “dome” of hat
not stars. The stars were fixed in
unchanging positions, as men
observed. But after men learned to serve
better, the stars gave way.
Of my
posits
of stars change. Astronomers call these
changes the rope motion of stars, even
for Barnard’s star, the test star. (“San Francisco Diary”)

It was an Alternative Press card from the 500 that Dad worked on in 1982, leading up to his last book A Certain Slant of Sunlight. The front had dad’s scrawl on it from a felt tip pen, signed Ted Berrigan and dated “24 Aug ’82.” There were blotches of white-out here and there. The title, in quotes with a thick blue-inked line outlined in black underneath, is “Song For The Unborn Second Baby.” The message is centered, in all caps and with an exclamation point[.]” 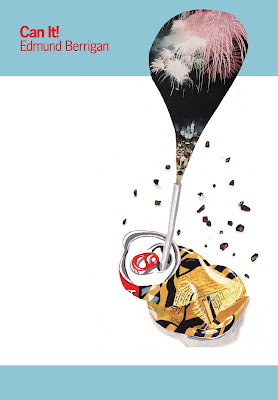 The collection of pieces that make up Can It! is a conversation with his father through their shared experience with and of writing—from journal/diary entries to interviews to a short play—and Berrigan the younger constructs a collage of twenty-five pieces around ideas of loss and being, memory, influence and family, and what remains. Berrigan’s book becomes homage to both his father and step-father through short passages. As Berrigan suggests in the opening passage, the best way to communicate directly to either and both of them is directly through the writing. Further in the collection, the pieces that explore the death of his step-father Douglas Oliver are especially poignant, as he writes in the last line of the piece “Paris Diary”: “Doug had come into our lives and filled in some of the empty space. Now he was leaving.” The strengths of the collection are multiple, from the emotional content to the narrative threads that ride deep throughout, and the breaks that exist between them through the collage-aspect of the final text. Can It! is a book of memory, comfort and being, and works through some difficult territory, from the loss of his father to the loss of his step-father. In the end, this is a conversation Berrigan is able to have through writing, and one that we should consider ourselves fortunate enough to have access to.

What is impressive is just what Berrigan is capable of in the form of short passages of prose and poetry, the accumulation of short, sharp pieces becoming far stronger than the sum of their parts, some of which can be read directly as short fiction, memoir and literary history. Through wrestling, also, with some of his own histories, it helps clarify some of his own distinctions, beyond any association with Ted Berrigan, Douglas Oliver or anyone else. It makes me very interested to see what Edmund Berrigan might come up with next.