Speak now before it is too late, and then hope to go on speaking until there is nothing more to be said. Time is running out, after all. Perhaps it is just as well to put aside your stories for now and try to examine what it has felt like to live inside this body from the first day you can remember being alive until this one. A catalogue of sensory data. What one might call a phenomenology of breathing.

You are ten years old, and the midsummer air is warm, oppressively warm, so humid and uncomfortable that even as you sit in the shade of the trees in the backyard, sweat is gathering on your forehead.

It is an incontestable fact that you are no longer young. One month from today, you will be turning sixty-four, and although that is not excessively old, not what anyone would consider to be an advanced old age, you cannot stop yourself from thinking about all the others who never managed to get as far as you have. This is one example of the various things that could never happen, but which, in fact, have happened. 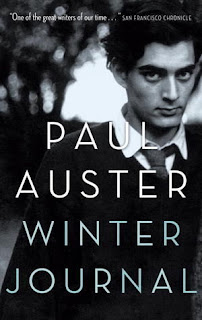 And so opens New York novelist Paul Auster’s sixth book of memoirs, Winter Journal (Toronto ON: McClelland & Stewart, 2012), which appears to be quite a wealth of memoir titles from any writer of literary fiction of recent memory. Certainly, Auster is prolific, being the author of sixteen published novels, as well as poetry and screenplays, but this new Winter Journal, begun on January 3, 2011, “exactly one month before his sixty-fourth birthday,” follows his The Invention of Solitude (1982), The Art of Hunger (1992), Why Write? (1996), Hand to Mouth (1997) and The Red Notebook (1995) as well as Collected Prose (2005; expanded edition, 2010), making his foray into the form of the memoir quite considerable. Perhaps this is appropriate, as the suggestion exists within the new book that his early work of non-fiction, The Invention of Solitude, was his first important work, one that begun with the death of his father. The fact that his years of publishing works of fiction have gone hand-in-hand with publishing such works of non-fiction clearly mean that Auster knows the essential matter of telling a compelling and passionate story, even one as personal as his own, or those of either of his parents, all of whom are given lengthy consideration.

Always lost, always striking out in the wrong direction, always going around in circles. You have suffered from a life-long inability to orient yourself in space, and even in New York, the easiest of cities to negotiate, the city where you have spent the better part of your adulthood, you often run into trouble. Whenever you take the subway from Brooklyn to Manhattan (assuming you have boarded the correct train and are not traveling deeper into Brooklyn), you make a special point to stop for a moment and get your bearings once you have climbed the stairs to the street, and still you will head north instead of south, go east instead of west, and even when you try to outsmart yourself, knowing that your handicap will set you going the wrong way and therefore, to rectify the error, you do the opposite of what you were intending to do, go left instead of right, go right instead of left, and still you find yourself moving in the wrong direction, no matter how many adjustments you have made. Forget tramping alone in the woods. You are hopelessly lost within minutes, and even indoors, whenever you find yourself in an unfamiliar building, you will walk down the wrong corridor or take the wrong elevator, not to speak of smaller enclosed spaces such as restaurants, for whenever you go to the men’s room in a restaurant that has more than one dining area, you will inevitably make a wrong turn on your way back and wind up spending several minutes searching for your table. Most other people, your wife included, with her unerring inner compass, seem able to get around without difficulty. They know where they are, where they have been, and where they are going, but you know nothing, you are forever lost in the moment, in the void of each successive moment that engulfs you, with no idea where true north is, since the four cardinal points do not exist for you, have never existed for you. A minor infirmity until now, with no dramatic consequences to speak of, but that doesn’t mean a day won’t come when you accidentally walk off the edge of a cliff.

There is such an ease to his writing, and even a seemingly-endless rush of prose doesn’t stray from the mark, or the story. There is such an ease, even within the complexity of the story he weaves, that he manages to hold together through unending temporal leaps, lengthy asides and personal quirks. Winter Journal is exactly what it suggests, which is, a journal of recollections, composed as a funny, strange and brutally open memoir looking back over the stretch of Auster’s life as an appraisal and reappraisal of just how he managed to get to his current state. It would gain anyone to take occasional stock as to how one has moved from “there to here,” but few so brutally self-aware and honest and Paul Auster. One can only hope that there is still more to come, in another few years, in another few decades.
Posted by rob mclennan at 9:01 AM
Labels: McClelland and Stewart, Paul Auster