In the text which opens this collection, Renee Gladman raises the problem of writing about Gail Scott’s writing, the problem of making Scott’s sentences into objects of literary study. It is difficult, her text suggests, to say something about these sentences – and to do so using sentences. Gladman finds her utterances becoming impossibly layered as soon as she makes an attempt. The problem is not so much Scott’s sentences as the English sentence which, in Gladman’s experience, does not lend itself to thinking. Gladman’s solution is to narrate for us the process of drawing specific sentences from Scott’s novels on the walls of her living space, of turning them into “a geometry instead of a verbal consequence.” In her terms, she keeps on saying and drawing until eventually she has “made a complex observation and a picture-feeling.” I am reminded, here, of Guido Furci’s sense that although cinema is relevant to Scott’s work, “parallels with painting speaks more eloquently.” Gladman’s text is as much about her process of writing as about Scott’s sentences. It has the effect of critically reframing as collectively-authored, sentences usually taken to be individually-authored. What is more, by writing Scott’s sentences on the wall – as in a museum, an alley, a washroom or a project room – Gladman’s text turns them into public statements, with the potential to stand as counter-discourse.
A special issue of Open Letter devoted to a specific writer works a little like Gladman’s text, citing and reframing that writer’s work, and foregrounding its conceptual purchase. The contributors to this issue – the majority of whom are themselves writers – responded to the call for texts with poems and essays. Their essays are not so much ‘about’ Scott’s writing as instances of how to read Scott and, especially, how to read alongside her. The poems engage in a kind of co-authorship, whereby fragments from Scott’s prose, an image or a phrase, become the occasion for more writing. Not surprisingly, the poems dispense with quotation marks. As Scott puts it in an interview with Corey Frost in the late 1990s, “we’re all quoting each other all the time anyway” (66). In the terms of Robert Glück, from a discussion of Kathy Acker’s practice of citation, “[a]ppropriation puts into question the place of the writer – in fact, it turns the writer into a reader” (“Long Note on New Narrative” 32). Appropriating Scott’s writing for new projects – social, textual and linguistic – the texts collected here turn writers into readers and critics into poets. Like Gladman’s sentences on the wall, they emphasize the collective and public status of writing. (Lianne Moyes, “Introduction”) 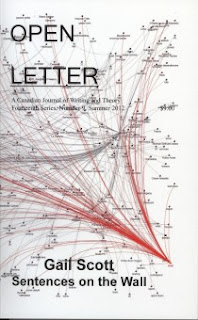 Guest-edited by Lianne Moyes in collaboration with Bronwyn Haslam comes the new issue of the critical journal Open Letter: A Canadian Journal of Writing and Theory (Fourteenth Series, Number 9, Summer 2012), produced as “Sentences on the Wall,” an issue on the work of Montreal writer Gail Scott. Moyes is also the editor of Gail Scott: Essays on Her Works (Guernica Editions, 2002), and its interesting to see how her interest in Scott’s writing continues after such a project, furthering her own work with another. Given the fact that the same editor oversaw both projects, does this issue become a re-examination of her consideration of Scott after the first volume, a continuation or an update? One of the highlights of the issue has to be former Montreal writer Corey Frost’s exploration of Scott’s punctuation, “Punc’d: Towards a Poetics of Punctuation in the Novels of Gail Scott,” or the collaborative “Temporality, Genealogy, Secrecy: Gail Scott and the Obituary of Genre” by Angela Carr and KateEichhorn. A particular favourite was Vancouver writer Meredith Quartermain’s “How Fiction Works: Gail Scott’s Heroine and The Obituary,” not just for how she speaks of Scott’s fiction, but on the mechanics of fiction, providing insight into her own writing, and in the possibilities of writing:

How does fiction work? What is the work or knowledge-making or deconstructing analysis that fiction can do? Harry Mathews reminds us that the fiction writer is not “’saying something’ to the reader”; rather, the writer must “do no more than supply the reader with the materials and … the space to create an experience” (7). Indeed he emphasizes that “of the writer and reader, the reader is the only creator” (7). The writer and reader are collaborators, and to establish a place for this, the writer must choose “as the innermost substance of” the writing, “a terrain unfamiliar” to both writer and reader (6). Furthermore, he argues “the unfamiliar matter the writer chooses in nothing else than his [or her] own story” (7). Of course this is not the familiar “publicity” story we tell about ourselves in casual conversation. Rather it is the story or stories of what has made us what we are. We find this story, he says, in our personal histories, in our bodies, and in our consciousness, by which he means, not merely awareness of things but “what you think and feel with.” Consciousness, he says does “not contain or withhold meaning; and consciousness itself has no meaning at all”; it is “the power to create meaning” (8-10). “What we long to know in our speculations about the stars,” he says, “surpasses merely something: We long to know everything. And in fact that consciousness is capable of exactly that: of knowing not only anything but everything” (10).

As Moyes wrote in her introduction, part of the appeal of such an issue is not only the range of essays on Scott’s works, but the tributes included as well, with poems from Fred Wah (from “Music at the Heart of Thinking”) and Camille Roy, as well as a short essay/tribute, “My Two Cents” (an earlier version of which appeared in How2 1.2), by Robert Glück that opens with the sentence, “Every aesthetics is an aesthetics of class.” He continues, writing:

In thinking about a poetics of class that knows itself, it’s instructive to look at the history of feminist poetics. In the first place (if you could call the sixties and early seventies the first place), an innovative feminist poetics seems to be disallowed. If you were going to make a feminist poem recognizable to feminists or to the avant-garde, feminism was content. Formally innovative poems founded on radical politics took their cues from Marxist and socialist critiques which did not include sexuality, gender, or, somehow, glass.

As Camille Roy writes of her “2 Miracle Plays,” “These poems are tributes to Gail Scott. They incorporate specific ideas from a talk ‘The Sutured Subject’ that she gave at the University of San Francisco in November 2009, as well as some lines taken from her latest novel, The Obituary. In her talk she explored the relation of history to the sentence, where history (and the dead) are encrypted in our language and the sentence itself becomes a kind of crypt for what has disappeared. The first ‘Miracle Play’ explores this relation, and uses the English future tense (“I will…”) with its expression of will for the future to highlight what Gail noted in her talk, that French lacks such a will for the future.” I reproduce the first of Roy’s “2 Miracle Plays” here:

The Sentence As Sentence

On the afternoon we are murdered
our story will become malodorous.

We will arrive at prison’s gate wan & hesitant
to show: no guilty conscience.

Stripped of false unities
& without will for the future

we’ll hold to the blaze of our wrong idea.
Its sullen rejoinder & refusal to admit defeat!

The light of custom will be our bodies.
Call this play: as density,

encrypted & insensible.
Until a new sentence rises: in layers, tender as cake.

Creatures as words: so much alive.
Whinnying in the slammer.

Despite her work and lengthy career as a writer, thinker and innovator, Gail Scott remains much admired and followed by other literary writers, but critically underrepresented. One can only hope that such a critical tribute and exploration could do worse than bring a new group of readers to her difficult and innovative ongoing work.