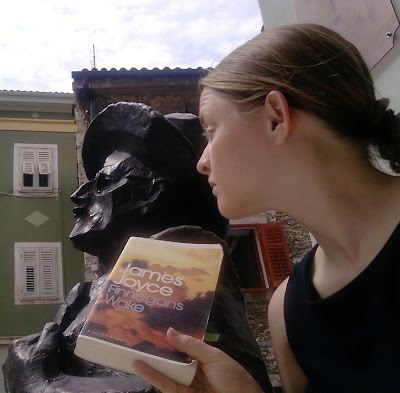 Elizabeth Kate Switaj’s first poetry collection, Magdalene & the Mermaids, was published in 2009 by Paper Kite Press. She has also published a chapbook, The Broken Sanctuary: Nature Poems, with Ypolita Press. Recent poems have appeared in Folio and Hawai’i Pacific Review. In 2011, her unpublished novel, The Broken Glass Collector was shortlisted for the Dundee International Book Prize. She is currently the Assistant Managing Editor of Irish Pages: A Journal of Contemporary Writing, a Contributing Editor to Poets’ Quarterly, and a doctoral candidate at Queen's University Belfast. www.elizabethkateswitaj.net

1 - How did your first book change your life? How does your most recent work compare to your previous? How does it feel different?
Publishing a book with a small press is a bit like turning 21 in the US: it doesn’t let you do much that you weren’t already doing, but it does legitimize some things.

In the last year or so, I’ve been playing with traditional forms in a way I hadn’t before. While working on my MFA, I often used traditional forms as part of mimetic exercises, but I regarded that writing as training. What I’m doing now is adapting these forms. For example, I have been writing what I call twinnets (twitter sonnets) which have ten characters per line instead of ten syllables; this adds up to 140 characters total—more if you count line breaks as characters, which means they can’t be posted in form on Twitter. I’ve always loved a paradox.

2 - How did you come to poetry first, as opposed to, say, fiction or non-fiction?
I’ve been writing poetry as long as I can remember, but I suspect that it comes down to Dr Seuss. When I was very young, before I could read, I would memorize his books and recite them with my mother, alternating lines. Though you can find a focus on language as sound in prose—the “Sirens” episode of Ulysses, for instance—it’s not as common or, typically, as evident as it is in poetry.

3 - How long does it take to start any particular writing project? Does your writing initially come quickly, or is it a slow process? Do first drafts appear looking close to their final shape, or does your work come out of copious notes?
My writing is a slow process that looks fast, as I tend to incubate ideas for quite a while before beginning to write them; if a perfect line comes to me during this period, I may note it down, using Evernote or a pen and whatever paper is handy, but most of the time when I start writing it is all in my head.

The first full draft usually looks quite a bit like the finished project because I tend to linger over and rewrite lines as I compose.

4 - Where does a poem usually begin for you? Are you an author of short pieces that end up combining into a larger project, or are you working on a "book" from the very beginning?
I work in both directions: I’ll notice short pieces beginning to cluster around a theme and then begin working deliberately on a book.

As to where individual poems begin, most of the time I don’t know. When I do know, it is usually because I’m writing in dialog with another poem: I’ll see a technique I want to try or an idea I want to respond to (let’s be honest: usually I think I can do something better, or I’m disagreeing with something) and go from there.

5 - Are public readings part of or counter to your creative process? Are you the sort of writer who enjoys doing readings?
I love giving readings, but I have rarely found them to affect my creative process one way or the other. The exception to this was during the year when I lived in Ashikaga-shi and participated in a monthly open mic in Ebisu, Tokyo. It gave me a more concrete notion of an audience than I have otherwise had; for that year, I wrote for the regulars.

Now that I think about, it’s strange that I never really thought of my MFA cohort in similar terms. I guess the formalized feedback of workshops awoke my oppositional tendencies.

6 - Do you have any theoretical concerns behind your writing? What kinds of questions are you trying to answer with your work? What do you even think the current questions are?
The same broad concerns that guide my critical work underly my creative work: what does the artist do with the material of the everyday? How does life become, or change, art?

7 – What do you see the current role of the writer being in larger culture? Does s/he even have one? What do you think the role of the writer should be?
In many ways, writers are marginalized; even in the publishing industry, it seems like the best contracts go to people famous for things other than writing. But the margins are fertile, and the internet feeds that fertility, though there are still margins within margins reflected in who gets covered on what blog and how negative comments about different people’s works are treated.

Should is harder than is. I believe in, and seek, the radical possibilities of the margin, but I wouldn’t want to enforce that on other writers.

Writers should be like a chorus, and not necessarily a Greek one. It takes more than one part to make harmony.

8 - Do you find the process of working with an outside editor difficult or essential (or both)?
Essential, no. Helpful, yes. Difficult depends on the editor. I did once withdraw a few poems from a journal when the editor insisted that she be given the right to publish pieces with whatever changes she saw fit, before she even gave any indication of what those changes might be; I’d name and shame, but experience suggests that she has a Google Alert set up for both her name and her journal.

9 - What is the best piece of advice you've heard (not necessarily given to you directly)?
The harder you try to hide something, the more it will show.

10 - How easy has it been for you to move between genres (poetry to critical prose)? What do you see as the appeal?
I used to say that I wrote prose to figure things out and poetry about things I already understood. Now I think they form two prongs of exploration that feed each other.

11 - What kind of writing routine do you tend to keep, or do you even have one? How does a typical day (for you) begin?
I hate routines and mornings.

I use an alarm clock app set to play The Poetry Foundation’s Essential American Poets podcasts, and I usually hit snooze a few times before getting out of bed. Then I do 5-10 minutes of calisthenics, make breakfast, and brew a large French press of coffee. If I don’t have anywhere to go, I check my email and do some reading before getting down to writing; if I do have to be somewhere, I am almost always in a rush.

12 - When your writing gets stalled, where do you turn or return for (for lack of a better word) inspiration?
I don’t really experience this because I have so many projects in different genres going at the same time. If one stalls, I move on to another.

13 - What fragrance reminds you of home?
Coffee or a pungent sea: first home. Genmai cha or rotten ginkgo: second home.

14 - David W. McFadden once said that books come from books, but are there any other forms that influence your work, whether nature, music, science or visual art?
I have written a fair amount of ekphrastic work and work that comes from close observation of nature, especially urban nature. I can’t write poetry while listening to music because the rhythms clash.

15 - What other writers or writings are important for your work, or simply your life outside of your work?
Right now, James Joyce is everything. I’m nearly finished with a doctoral thesis on his work, and I have made some very good friends through the study of his work.

And Emily Dickinson has influenced my writing deeply, for longer than any other writer.

16 - What would you like to do that you haven't yet done?
I want to write a long (book-length) poem; I have two in different stages of incubation at the moment.

17 - If you could pick any other occupation to attempt, what would it be? Or, alternately, what do you think you would have ended up doing had you not been a writer?
I’d be a photographer. Photography is my second medium now. I’d love to be an opera singer, but I don’t really have the voice for it.

18 - What made you write, as opposed to doing something else?
At a certain point, I decided that to move forward as an artist, I needed to choose to focus on photography or writing: I thought I could do more with words. Also, photography costs more money to practice.

20 - What are you currently working on?
I don’t have a big poetry project that I’m actively working on right now—just smaller, individual poems. Outside of poetry, I’m putting the finishing touches on my thesis and revising a novel manuscript.