Oh There You Are I Can’t See You Is It Raining?, Laura Broadbent

Your task is to smell the morning and there’s nothing wrong with what you’re wearing and your hair’s just fine so notice the wild staccato and sinew of sound from the loud to minute brush of dry grass there is no violence or distraction let’s say it’s lightly snowing and every snowflake has the power of an extraterrestrial crystal palace of monumental healing and light so who cares if your decisions have been correct. No you, no you, no you. 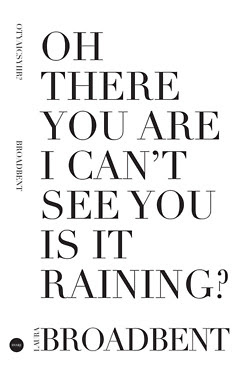 Now that Montreal publisher Snare Books hasbecome an imprint of Invisible Publishing [see Snare Books editor/publisher Jon Paul Fiorentino’s post on such here], it puts a different spin on Montreal writer Laura Broadbent’s first poetry title, Oh There You Are I Can’t See You Is It Raining? (2012). Selected by Toronto poet Sachiko Murakami as winner of the sixth annual Robert Kroetsch Award for Innovative Poetry, Broadbent’s Oh There You Are I Can’t See You Is It Raining? unfortunately holds the position of being the last independent title by SnareBooks. At least under Invisible, at least, the press will still exist, albeit in a different form, which is certainly preferable to the press disappearing entirely. Does anyone recall such Canadian presses as Ragweed Press, Gutter Press or Red Deer College Press (who produced the magnificent “writing west” series)? All gone, for many different reasons, well before their time.

She looked over to me looking at her and said I need a fire ceremony to burn all my old love letters. I told her that could be arranged. I told her I’ve burnt all the love letters I’ve ever received. Except for hers. Which will probably get burned one day too, she says. I told her, probably, but so will my corpse. She laughed without smiling. (“Men In Various States”)

Broadbent’s collection is constructed out of a series of section-suites, each stretched out across a series of single canvases that stitch together into a tight collection of lyric fragments. Composed in section-suites, the book includes “Between A and B” and “Culled,” the second of which appears to include the remainder of the collection, four smaller section-suites: “Suite 1,” “Suite 2,” “Suite 3” and “Men In Various States.” There is something about the sharpness of Broadbent’s lines that really appeal, and the range of styles that move throughout the collection, showing a larger, longer comprehension of the line, the sentence and the entire book, very much a single unit constructed out of pieces. Her work has a questioning certainty to it, one that asks as much as it gives. The last three sections of “Suite 3” read:

[18]
Art school students’ projects are parties.
Be on guard for the projects of art students.

[20]
Remembering things
is an invitation to drowning.