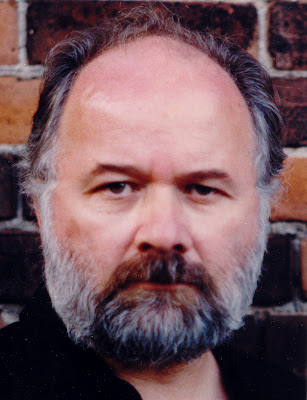 Glen Downie was born in Winnipeg, worked in cancer care for many years in Vancouver, and now lives in Toronto.  In 1999, he served as Writer-in-Residence at Dalhousie University's  Medical Humanities Program.  He has published several collections of poetry including Loyalty Management, which won the 2008 Toronto Book Award. His most recent book is Left for Right (Pedlar Press, 2012).

I’m not sure my first book changed my life, exactly; the publication of another slim volume of poetry is rarely an earth-shattering event in this culture.  But in the eyes of non-writers, I guess it validated my having spent so much time on what seemed like an impractical activity.  Some people saw it as proof that I wasn’t merely a wannabee.  And opportunities to do readings and write reviews flowed from it too.
My most recent work, Left for Right, consists of prose poems, so it’s different in form from the first book, but not from the one that immediately preceded it, Local News.  One way the recent books feel different from early ones is that they now occupy this border territory – or no man’s land – between poetry and prose.

Poetry resonated with me from an early age – verbal music and intensity of feeling tightly packed into a very small space.  I’ve published fiction and non-fiction too, but I’m temperamentally still a miniaturist.  I thought it more likely I’d achieve the potency and music I wanted for my words within a small compass, so I haven’t been much tempted by larger, more expansive forms like the novel.  I also tend to favour writing that stays pretty close to its passionate origins, and isn’t distanced by excessive, and sometimes arbitrary, invention.  Which is not to say that there is no invention in poetry, of course.

It varies with the work.  Some have come more or less fully formed, others required lots of tinkering.  Some things need to percolate subconsciously before they can be written, for days, weeks or sometimes years.

Different ways for different books.  The ones that were clearly ‘books’ early on often had an inherent structure or frame.  Desire Lines, for example, was rooted in a particular journey, and was mostly confined to the contours and limits of that journey, with only a short prelude and postscript on either side of that.  Local News, which is a book of daily life carried on close to home, developed a concentric circle structure – the house, the yard and garden, the neighbourhood, the city – that reflected those spheres of inhabited space.  Other books, like Left for Right, have their unifying themes emerge in the sorting and ordering, and poems may be included or excluded on that basis.

For me, the main value of readings to the creative process is that they highlight, if I didn’t already know, which parts of the work are difficult for people to grasp without reference to the printed text.  Which may or may not be something I choose to act on, but it’s useful information.  Apart from that, readings are a break in a writer’s isolation, and provide immediate feedback, which is especially beneficial now that reviews are harder to come by.   So generally I enjoy readings, though it helps if the organizers have given some thought to the environmental conditions that allow for a good reading, which they don’t always.

Yeats wrote: “God guard me from those thoughts men think/ in the mind alone./  He that sings a lasting song/ thinks in a marrow bone.”  That expresses some of my wariness about the theoretical.  Theory needn’t be purely intellectual, of course, but people often do cleave to it out of a desire to appear intellectually superior, and to win the support of academics and some imagined ‘better class’ of critics or readers.  There are theoretical concerns – as there are moral, existential and emotional ones – behind, below, above, within and around my writing, many issues that I wrestle with both as a writer and a human being.  But I’m not sure I can or want to articulate them differently here than they are in the work itself.  Of course, critics and other thoughtful readers are welcome to try.

Canary in the coal mine?  Gadfly?  Village idiot?  I think there are many kinds of writers, and many different roles a writer might fill in society, not all of them welcomed by that society.  I wouldn’t presume to tell other writers what their role should be.

For me, it’s often difficult, but useful nonetheless.

Make it “the full meaning of omnivorous”.  Improved that poem immensely.  And sticks in my mind as an lesson on the importance of very small changes that can make all the difference when working in a tight space like the poem.

10 - How easy has it been for you to move between genres (poetry to medical writing)? What do you see as the appeal?

I’m not sure what you mean by ‘medical writing’ as distinct from poetry on medical subjects – notes in a patient’s chart?  That’s about the only non-poetic ‘medical writing’ I’ve done.  As for switching between the two, it never struck me as difficult, any more than switching from writing a grocery list to writing a letter to writing a poem.  Different kinds of writing for different purposes.
But if your question refers to moving from poems on medical subjects to poems on non-medical ones, that was always the case, and was never difficult.  Writing about my work in medical settings was never my exclusive subject; those poems took up perhaps a quarter of my first book.  The appeal of moving between genres, subjects, forms or whatever, is simply the freedom to write whatever moves you in whatever way best suits, and the freedom not to be pigeon-holed into any one subject or form.

I’m often struck by the irony that the speech centre in my brain wakes more slowly than the rest of me.  Which is not to say I don’t occasionally stumble to my desk to get down words or images that came to me in dreams.  But for the most part, the structure of the day is determined by household responsibilities, the presence or absence of other people, other demands.  I don’t worry about establishing a writing routine.  I write when I need to or want to, confident that my subconscious is working on stuff even when I’m not at the desk writing.
Within the constraints of family, though, I have gotten used to fairly regular stretches of quiet time that I can structure for myself, when other people are out of the house.  I can get a bit cranky if I lose that, especially if I have something I’m burning to work out.

Walking is good.  Canoeing too.  Other people’s writing can trigger things, but wordless art can also be a great help.

About the time I started to write seriously, in my teens, I moved into the attic room of our house, which had previously been occupied by my oldest brother.  The room was very clean, as was he, but it had only a pair of very tiny windows for ventilation, so his scent lingered a long while.  Of all my brothers, he’s the one most sympathetic to poetry generally, and my writing in particular, so perhaps it’s no coincidence that I found that scent a sort of comforting and benign ghost-presence.

Absolutely.  The more time I spend reading and writing, the more it feels important to me to be reminded that there are other, non-literary forms of wisdom,  Nature, music and visual art all resonate with me in ways that compliment the literary, and challenge me to articulate different truths in different ways.

Too many to name – mystics, essayists, poets.  A motley crew, to be sure.

Something wordless might be nice – bookbinder, photographer, musician.  I wish I’d realized earlier there was such a job as curator.  ‘Curator’ – sounds a bit like ‘creator’, doesn’t it?

I did ‘something else’ for many years, writing all the while.  I didn’t see it as ‘opposed to’.  It fed the writing, reinforced my desire to write.  I was happy to do both.  I’m still grateful for my non-writing responsibilities, even if I get frustrated by them at times.  I think it’s good for a writer to be grounded in the ‘real world’ of daily obligations, and not live exclusively in some hot-house environment.

I think the greatest books are the ones you choose to re-read, because their influence is not just of the moment, because they keep haunting you, and won’t let you alone.   I go back to Kafka frequently, particularly the short stories; I’d like to do one or two as a letterpress chapbook.  Similarly, a great film I’ve re-viewed recently was Street of Crocodiles by the Brothers Quay, inspired by Bruno Schulz’s book.

[Glen Downie launches Left for Right in Ottawa at The TREE Reading Series on November 13, 2012]