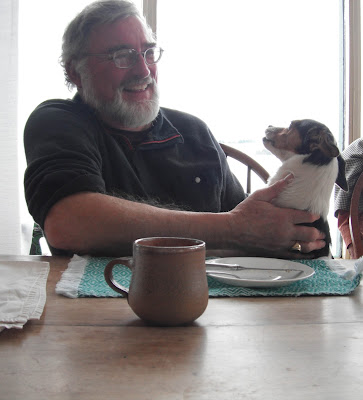 Peter Sanger is a poet, prose writer, critic and editor. He received his education at the universities of Melbourne, Australia and Victoria, British Columbia as well as Acadia University in Wolfville, Nova Scotia. During his thirty year teaching career at the Nova Scotia Agricultural College (NSAC), he became Head of Humanities and later received the recognition of Professor Emeritus in 1999. Sanger's commitment to his work and students, his achievements in his writing and in his community have earned him an Honourary Doctorate from NSAC which he was awarded in May 2012.

Sanger has published numerous books of poetry including Aborealis, a collaborative project with renowned photographer Thaddeus Holownia in 2005, Aiken Drum which was shortlisted for the 2006 Atlantic Poetry Prize and his most recent collection John Stokes' Horse (2012). His prose projects include Spar (2002), White Salt Mountain (2005), The Stone Canoe: Two Lost Mi'kmaq Texts (2007), and his extensive study of the life and poetry of Richard Outram, Through Darkling Air (2010). He is also known for his measured criticism and insightful reviews of work by Douglas Lochhead, Robert Bringhurst, John Thompson, Emily Carr and Elizabeth Bishop. Sanger has been the poetry editor of The Antigonish Review since 1985. He lives South Maitland, Nova Scotia.

The America Reel, my first published book ( there were three unpublished books before it), did not "change" my life when it appeared in 1983, for several reasons.  One was that I was forty and too old to be changed. A second was that the book, at the time, was either ignored or quickly forgotten.  You ask about the differences between the first book and recent work.  That is really for others to say, if they think the differences distinguishable.  I know that the obsessions are the same.

Why poetry, rather than fiction or non-fiction?  I have always heard words in patterns of rhythm.  Poetry is an old song and dance.  I have written a fair bit of non-fiction.  It is the only form of epic poetry I can try to manage.

In one way or another, the poems of Aiken Drum (2006) took nearly twenty-five years to write, though most of the book was written between 2003 and 2006.  John Stokes' Horse (2012), its successor, took three years to write.  What you call the "writing project" does not begin or end for me.  It is continuous. Some poems are finished in one draft.  Others may take fifty or more.  It may take several years to find the right word- or the word that is a right as I can find.  I keep notebooks recording fragments and variations, often overheard or from my own reading.

Both poems and prose often begin from a rhythmic fragment or a phrase tensioned by sound.  As poems or prose fragments accumulate, they generate a "conversation" among themselves that leads to a book.  At some point, the poetic or archetypal logic of the unfolding book takes over.  All my books are shaped accordingly.  The poems at the beginning of each book are, in a sense, more limited than those at the end, though the last poems are implicit in the first.

I enjoy readings, usually, but they are, under modern circumstances, often occasions that are easy to miscalculate and be unbalanced by.

There are teleological concerns in the poems and prose.  Some would call them theological, The details of these concerns are in the work.  I very much oppose turning them into abstractions which might appear to solve any enigmas the work is perceived to have.

The role of the writer is to keep faith with words.  A writer's word is a writer's bond.  In the modern situation, to be more specific, this faith involves resisting the commodification of language.  At present, the writer can only resist - and that resistance includes resistance of word against word, poetry against poetry, a self resistance.

Working with an editor is both difficult and essential.  It is an example of the kind of resistance just mentioned.

Richard Outram once told me that every poem should contain some element of grief.

10 - How easy has it been for you to move between genres (poetry to prose)? What do you see as the appeal?

As said above, prose is all the epic a lyric poet might hope to write.  Good prose offers fewer hiding places than bad poetry.  One of the cruxes of good prose is competent handling of transitions.  In bad poetry, transitions are often skidded over or ignored.  A good technical writer of prose is a more worthy artist that a bad poet.

Unless I  have contracted to produce a pice of writing (usually prose) by a certain time, I follow no schedule.  I am always writing in my head, sounding words, and listening to all sounds.  My day begins with chores to do and obligations to meet.  Writing, in one form or another, accompanies them.

I turn to reading.  I go back through my notebooks. I do the day- to- day jobs that must be done. I consult sleep.

Where did the first book come from?  We know the story of subsequent ones, it seems.  But the first one?  Maybe it still is there to be written.

There is not room enough or time to answer here. A partial answer is in my books and essays.

I would like to write a poem by anonymous that is recorded as such.

I can easily imagine myself teaching English at an agricultural college.

That remains to be heard.

[Richard Sanger reads in Ottawa at The TREE Reading Series on Tuesday, October 23, 2012.]