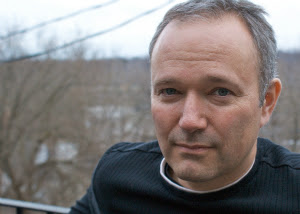 Chris D'Iorio published his first book of poetry, Without Blue, with Toronto's Quattro Press last fall. He works the tax laws for a living, is on the editorial collective for influencysalon.ca, and is on the board of Sketch Working Arts for Homeless and Street-Involved Youth. He has had work appear in a smattering of journals, most recently filling station.

Publishing a book makes me feel slightly less uncomfortable when I tell someone I'm a poet.

My hope is that my recent work explores territory beyond influences I picked up reading high modernism as an undergrad. Not that I disclaim them, but I hope my reading has broadened, and the seriousness of purpose has tapered off.

The reality of my suburban upbringing and immersion in commercial media means that I was only ever exposed to poetry as an idea of formality in language -- typically experienced as dirges or epithalamia -- without having any meaningful engagement with it in either its vital or canonical manifestations. So I wrote poetry because it seemed unhinged from influences in the actual culture I knew -- e.g., The Beatles, Flintstones and M*A*S*H. It seemed to be outside anything actually culturally transmitted or received. The literary bankruptcy of my upbringing created a poetical littoral I could wander without hindrance.

Now I write poetry because I never seem to finish any fiction projects I start.

Very slow and evolutionary. Conceptually a project appears in a number of guises: a collection of clips (some textual, images, etc.) or as a theoretical undertaking. I have dozens of these beginnings lying around at any given time, and will typically only work one out if it begins to shift and show itself as protean. If I can then wrestle down its manifestations (often connecting or collaging other bits to it), then I work it out. If it doesn't shift, I find I have no interest in it.

I tend to produce many short pieces, thinking of them as ultimately belonging to something larger.

Anticipating reading something aloud to others shifts me into an editorial mode that I find helpful. I enjoy reading, the physicality of it.

I can't really conceive of an interest in writing without an interest in theory: my theoretical interests happen to be informed by literary studies in the eighties and nineties, but take your pick of how you explain to yourself what's going on when we speak and write. Ultimately, this is a personality thing: I'm equally amazed that someone can use a word processor and not wonder how it works, where the files go, etc.

Since I spend most of my time participating in language practices that serve the hegemony of capital -- and because I'm extremely ambivalent about it -- I fantasize about finding ways to activate my poetical texts as codes or viruses within the networks we now find ourselves participating in. I'm not saying I do this now, but I see it as a form of personal redemption, and I've been working for many years on the skills necessary to devise hybridized texts that have the kind of activation potential that a piece of computer code has. I mean this literally: a poem that can negotiate interchanges in the interstices of the internet. That would be cool.

We are allowing ourselves to be defined now by the needs of networks -- Google, Facebook, email, Twitter (as the latest manifestations) -- and we seem to be doing so quite willingly without much thought given to the ways in which these networks control and produce our text. We are actually co-opting our relationships, reconceiving them as "social networks" so that they can become nodal points -- data sources or data consumers -- that are appropriate for the algorithms that drive advertising. Since it's no longer the case that the conditions of production of our textual work depend upon styli and prepared surfaces or the levers of a typewriter and paper manufacture, I want to explore how words are now produced and distributed on machines whose physiognomy and inter-relationships have a complexity that is beginning to rival our own. While I think we'd like to think of that complexity as a diminutive reflection of the orders of our own being (or at least as derivative of them), I'm worried that it is becoming constitutive. Well, I'm worried to the extent that we don't understand it, or don't seem to mind, or just retreat into digital Luddism.

My own experiments are very tentative in this area, and may not come to fruition for some time, if at all. It is infinitely easier to watch language unfurl in complex ways that feel familiar and comfortable to me and that recite my own expectations of poetry than it is to labour with Python (the scripting language) or try to code something that doesn't look completely sophomoric in Processing or Javascript, but I know that it's a necessary exploration: it responds to the order we are both creating and succumbing to.

There are some great examples of this type of poetical experiment out there: Bill Kennedy and Darren Wershler-Henry crafted a vertiginous paean to the automated construction of an interpellated subjectivity with Apostrophe, and Nick Montfort's perl poems [http://nickm.com/poems/ppg256.html] crawl like cellular automata toward inflections of poetical utterance. And of course there is Flarf. And tons of other stuff, for sure, but I haven't seen much that takes on the properties of code itself.

I want something that engages some web-based API, interacts with a reader's Twitter history, and then visualizes the history of its enactments and makes that available through its own API. I want a poem toy or a versified interactive fiction. Maybe this already exists and I haven't yet come across it. I want these things as tools, means as much as ends. I really can't believe we don't have them yet. I'm also disappointed I don't have a flying car like I was promised on the Jetsons.

Depends who's paying. If the dust jacket sells the standard plan (pleasures of an exploration of self, growth, loss -- the whole human thing, warts, foibles, sadness et al), then I think you're obliged to deliver. I'm not talking about accessibility, but the narratives of self, the normativity of recounted experience, reflection and transformative understanding. I think humans prefer, because of all the evolved neural pathways that get fired and the pleasure that comes from that stimulation, when people tell us about people -- mostly about people on quests. I'm not suggesting some warmed-over Joseph Campbell or Jungian analysis and it's not about narrative per se -- this happens more succinctly in "Ode to the West Wind" than in any novel. I just think our wetware gets jacked up when it gets to replay the mythic trajectories, and that certain narratives have probably served an evolutionary purpose. How else do you get people to go to war or work?

So this loops into writer roles how? Because I think an experimental payload can be carried, like a mutation, inside the normative narrative of self. So if you give up on it entirely, you may not infect as many people. Unless you are an amazing marketer, in which case you've just shifted the narrative around subjectivity onto your authorial personality, which is the sign of a cool -- but perhaps slightly disingenuous -- operator.

Maybe what's become understood as lyric delivers normative narratives most easily. But I don't think lyric is thereby constrained to them -- it can seduce and compel attention and slip one past the reader. A shiv of the decentered subject when the reader was ogling something else.

I think it's always more about competing views of the status of subjectivity: is it largely a social construct, and is our role as writers to examine that, or is it inherent, something to be nurtured with wisdom and reflection on experience. I tend to go with the former assertion, but need the hooks provided by the latter to stay tuned as a reader.

So I think writers must give pleasure while infecting us.

10 - How easy has it been for you to move between genres (poetry to short fiction)? What do you see as the appeal?

N/A. Don't write enough fiction. That I'd show anybody, anyway.

I work fairly long hours for filthy lucre, and I have a kid who makes a claim on what's left of my time, so realistically, if I don't get up at five am and work for a few hours, I'm not doing any serious writing. Probably about half the year I manage to keep to that schedule. The rest of the time I'm just brain dead.

Definitely music -- the  articulation of presence and absence through rhythm are, in the way I understand them, central to both poetry and music as forms.

Study the ePUB 3 standard with a view to publishing poetry ebooks that don't look like they're formatted using Ginsu knives.

I'd do programming -- total immersion/alpha state.

I really don't know, but I imagine it has something to do with being the first child of my generation in my extended family, and a very poorly sublimated exhibitionism.