On the back cover of Vancouver poet Elizabeth Bachinsky’s new poetry collection, I Don’t Feel So Good (Toronto ON: BookThug, 2012), it says:

I Don’t Feel So Good is comprised of material selected from the handwritten journals and notes of Elizabeth Bachinsky (1986-2012). Lines and passages were selected by the roll of a die and appear in the order the die saw fit. In blending confessional and procedural techniques with disjunctive chronology and random chance, this book explores and exacerbates possibilities of the narrative mode both within the text and for the reader. Not so much “written” as “received.”

I admit to cringing a bit at the catalogue copy, pulling away from the seeming-preciousness of such a self-conscious construction. Just how aware is the reader meant to be of this construction while pouring through the book, the fourth trade title so far by Bachinsky (the back cover also notes a fifth, The Hottest Summer in Recorded History, due out in 2013)? Still, I like the visceral confessional fragments of the book, built as a single, extended poem out of these breaks, pauses and sentences. There is something about the connect and/or disconnect between the fragments and the construction that shifts the perception of the work. Are we meant to read the connections as arbitrary and random, or the entire collection as a broad canvas, representing the depth and breadth of the entirety of the author’s life so far? There is such an anxiety to the poems, the journal-fragments that make up I Don’t Feel So Good. What exactly is this long series of fragments seeking to map?

On the day in question, it was my intention to wake up early and clean the house. I had also wanted to do some writing. For whatever reason, I couldn’t get up. I mean I really couldn’t. Instead I walked around in a kind of daze. I tried very hard to get out of this state, but it didn’t happen. I knew things needed to get done. I got so overwhelmed by everything: bills, appointments, deadlines, my loan, the bathroom, laundry, kitchen, the cat, dinner, reading homework, the dread of Starbucks. So instead I stayed in bed and watched TV. I just couldn’t do it. I wrote a poem. 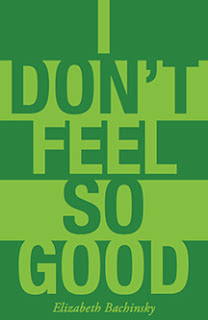 There is such an anxiety, and one of the most common words in the collection is “don’t,” echoing a pessimism as an undercurrent, however temporary it might be, from “I really don’t want to hear about peoples’ days.” (p 10) to “Don’t make me have to show my body.” (p 11) to “I don’t like anybody more than anybody; I just like some people / more than others.” (p 31). Towards the end of the collection, the slight uplift of a passage that includes: “The ending was killer. So sad! // But also very happy. // A happy sad ending!”

One could argue, of the procedural, if two words or lines are side by side, does it matter how they got there? Just how important is the awareness of her structure for the process of reading this work? If I Don’t Feel So Good is salvaged from journal entries, it joins an interesting list of other recent Canadian poets who have produced similar kinds of works, including Lisa Robertson’s Lisa Robertson’s Magenta Soul Whip (Toronto ON: Coach House Books, 2009) and George Bowering’s His Life (Toronto ON: ECW Press, 2000). On the other hand, in her confessional, Bachinsky’s work in this collection is more akin to, say, New York poet Rachel Zucker, or Toronto poet Lynn Crosbie, delving into and exploring a particular brutal honesty and openness, unafraid of whatever dark places might be revealed. In many ways, I Don’t Feel So Good is Bachinsky’s way of reconciling two previously distinct and separate threads of her published work, from the confessional aspects of her Home of Sudden Service (Gibsons BC: Nightwood Editions, 2006) and god ofmissed connections (Gibsons BC: Nightwood Editions, 2009) with the procedural of Curio: grotesquest & satires from the electronic age (Toronto ON: BookThug, 2005; second edition, 2009).

Once while sitting on a bus I thought, this is one of many moments. When I get off this bus, I will step into another life. Narrative, fiction, helps us make sense of our lives. Born, lived, died.

In that order, we are travelling across the Burrard Street Bridge

On the bus, A little boy sings happy birthday with his father into an iPhone. The iPhone gets it. Then it’s gone.

I Don’t Feel So Good is a risky work, a kind of highwire act between seemingly opposing strains. An interesting and compelling book, there remains something about the collection that feels unfinished, somehow, as though the fragments remain, for the most part, fragments, unable to entirely cohere into a singular unit. Despite that, I’m fascinated by the direction Bachinsky’s writing appears to be going in, blending the procedural with confessional strains. One could easily say that everything she has produced so far has led up to this, and the evolution of her writing is one that is worth following closely.