What am I doing—catless—here,
level-headed and certain,
without cause to judge?
What am I doing without my own face,
without either feet or staggering? Who is it that seeks me out
and doesn’t discover my telephone on its tiny coffee table?
I am but scarcely
the description of someone that knows me,
an identity card that has cast off first one foot
and then the other
and who will sleep until it is far too early.

(My flesh does not know of flesh. The saliva
coagulates and, oh, once again it is mid-afternoon
and the rain has not arrived.)

I recently received a copy of the eleventh annual Aufgabe, a journal produced out of Brooklyn, New York through Litmus Press, and edited by an editorial board of E.Tracy Grinnell, Julian Talamentez Brolaski, erica kaufman, Jen Hofer and Canadian poet Nathanaël. Along with their usual generous amount of poetry and “essays, notes, reviews,” this issue features a section of Salvadoran poetry, guest edited by Christian Nagler, including translations from the Spanish by Emily Abendroth, Karen Lepri, Christian Nagler, Jocelyn Saidenberg and Brian Whitener. In Nagler’s lengthy introduction to the section on Salvadoran poetry, he writes:

‘The quest for identity’ is a concept that perhaps signifies anachronistically in the intellectual climate of North America, where a ‘post-identity’ discourse provides some semblance of a contemporary mood, even if is not embraced or fully elaborated. We—some of us—are perhaps experiencing a milder form of what Huezo-Mixco cites as the presiding trend of the 1970s and 80s in El Salvador, when the “collision of social movements with entrenched power tend[ed] to displace identity issues.” In his lecture, Huezo-Mixco tracks the continued vitality of the concept of identity with regards to mass-events that have served to vitally confuse the idea of interior and exterior, namely a thirty year mass migration that now locates a quarter to a third of Salvadoran citizens outside the national borders. At the end of his lecture, Huezo-Mixco, arrives at a provocative conclusion that the younger generation of writers “re-creates the catastrophe of a fragmented and impoverished society.” It’s a gernation that does not write with “any enthusiasm for the political gains wrested from one of the bloodiest periods in Latin America.”

I’m impressed that a journal would so heavily and regularly be involved with translation, interested in engaging with other poetries, poetics and cultures, and in seeing the differences of subject matter, cadence and the line, as the issue features not only the special section but translated works within the section of general works. Some of the highlights of the issue include works by Noah Eli Gordon and j/j hastain, as well as Mathieu Bergeron (translated by Nathanaël). The pieces by Gordon are from a work-in-progress I’ve seen sections from before, his “The Problem,” which feature drawings by Sommer Browning. Given the drawings appear to be tailor-made for the work, one can only hope that a trade edition of the finished work might also include drawings?

What is to be done? A note on a page torn from a notebook says: a note in a defused cage. Further along, as a matter of fact, the grey skeleton of a human cage: a whole series of sawed, twisted bars. At the back, in the hay, as they say, lies a page torn from a notebook. From here, it is impossible to read it, but the repeated patterns trick the field: we are holding the page in our hand, we have already, necessarily, entered. On the front, we read: Turn the page; on the back: Turn around. Do you follow me? (“The Unformed Suite,” Mathieu Bergeron) 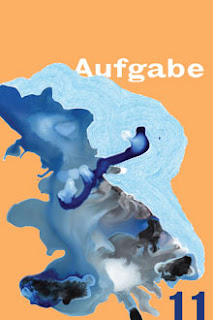 From the previous issue [see my review of such here] to this current one, there seems an entire different flavour, a different cadence of the works presented, and I’m uncertain if this is accident of submissions or a deliberate attempt to shape different issues (or if the difference is entirely in my own mind).

Still, a particularly interesting feature of the current issue is an essay by Ariel Goldberg, “Selections from The Estrangement Principle: A Poetic Criticism,” which questions a number of different directions of art and writing, in regards to definition, self-definition and the question of “queer,” writing “NPR tells the news with clips from an old interview, with no mention Ryan is a lesbian. If there is nothing about being a dyke in her poetry then should the word lesbian be uttered? Is Kay Ryan making history as the first out lesbian Poet Laureate with a Pulitzer Prize, or is this actively not being treated as history?” The piece continues:

The term “queer art” is both persisting and failing at a rapid pace, and for multiple reasons. Mostly the anti-definition catchall capability of the word “queer” sets the stage. For instance, I am resistant to a dead on defining of the word. Different queernesses float up here, and more specific identifiers inside of the “LGBTQ” acronym come in to sharper focus. I am working backwards, piecing together scraps. There is a sort of pact, in the word queer, anyway, to resist the task of definition. I am identifying with it, but also varying from it, throwing back to lesbian, or dyke. I pluck and examine. I am inconsistent. As important as it is to identify a gender or sexuality, so is it to name my race, my white privilege. My excellent education privilege. Being Jewish, whatever that means. The identifiers don’t exactly end. Being gender queer or a dyke or both collapses in this long exhale where it’s not important that I know the answer to a question someone is always asking.