What is it that makes great writing (and great art of all kinds, perhaps excellence itself) almost unbearable? The anguish of the impotent bystander, who can do nothing but stand and watch. The feeling of being condemned to sit forever in some generic living room while, on television, one after another, Olympic divers transmute themselves into steel, projectile, otter, swan. (“The Road”)

There is just something about this particular group of Canadian poets—Borson, Bringhurst, Lilburn, Simpson—that doesn’t really do a whole lot for me as far as their poetry is 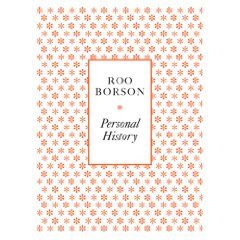 concerned (a list that certain I know would be thrilled to be part of, I know), yet I find myself attracted to parts of their non-fiction works (note that I am not including Zwicky or McKay, whom I find exciting, still, as poets). This is certainly the case with Toronto poet Borson’s most recent collection of essays, Personal History (Toronto ON: Pedlar Press, 2008), and sheds a whole new cast of light on several of her interests, as well as a few on her own writing practice. But just how personal is this history? There’s an aspect here that gets completely personal, and in places, even makes me crave more than what is compiled here, in these pieces that seem to stretch a course of years in some hundred-plus pages. In seven personal essays, Borson moves through the range of her intent in reading and writing, to a piece such as “The Silo and Related Works: Andy Patton,” writing on the works of the third in the collaborative Pain-Not-Bread trio that shifted the previous collaborative grouping by Borson and her husband, Kim Maltman (I will admit my bias, by saying my favourite of anything Borson has been involved with is still her collaboration with Maltman published in the mid-1980s by Quarry Press).

I like to think of Andy Patton’s work the way I think (perhaps perversely) of that small black painting: as direct depiction – though of what, we don’t exactly know. Nothing is hidden. The work is not coy. What we don’t know is right in front of our eyes, and doesn’t berate us for not knowing it. I like to rest there, in that private place where everyone is welcome. It’s possible to get lost in his blues. But however dazzling they might seem at first, to look long enough is to enter dusk, where colours settle themselves within a monochromatic scale. Once the eyes adjust to their immersion, subtleties become distinguishable, vagaries, imperfections where the ink ran, blurs of figuration ghostly as a sheet of paper in a dark room. No figure here casts a shadow, but the attention to darkness is palpable. Not the reflexive darkness and insolubility of our seeing (that would put the emphasis too much on us), not the grime of reaction and interpretation laid down, layer after layer, until it too acquires a patina (luckily, words stick to words more than words stick to canvas), but the paintings’ own darkness, what is intentionally indistinct. Within this indistinctness, the workings of perception begin to glint. “We live in a dark time,” he says in a catalogue essay, but there’s no point asking him to explain this. Better simply to look.

I find it interesting that Borson is willing to take this approach to visual art (admittedly, an art she knows not as a practitioner but as an outsider), yet in her essay “Poetry and Knowing” she begins to portray the art of writing poems as something almost dreamily romantic. Still, after reading through this collection of pieces, I am hoping that the memoir/essay form is one that she will continue with.

I'm not too thrilled either with the poetry of Borson, Bringhurst, et al, in my view the usual standard CanLit fare, and if the passage quoted from essays is typical (very limited in critical scope), literary criticism isn't her thing either.

Rob, don't apologize for not liking something. A lot of it's second-rate and taking the spotlight away from poets who deserve our attention.I'd be glad to give a list of names anytime.

And don't delete my post: dare to be critical!