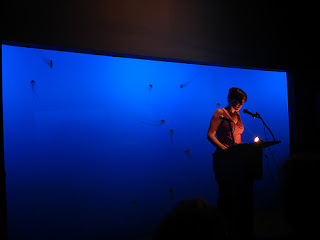 Cara Benson edited the interdisciplinary book Predictions for Chain Links just out at SPD. She is the author of the forthcoming poem books (made) and Protean Parade with BookThug and Black Radish, respectively. Other work is included in: Belladonna Elders Series #7 with Anne Waldman and Jayne Cortez, NO GENDER: REFLECTIONS ON THE LIFE & WORK OF kari edwards (Litmus Press/Belladonna Books), and Imaginary Syllabi (Palm Press). Spell/ing ( ) Bound, a tri-partite art objet with Kai Fierle-Hedrick and Kathrin Schaeppi (ellectrique press), and Quantum Chaos and Poems: A Manifest(o)ation (BookThug) will always be two of her favs. Benson edits the online Sous Rature and is a proud member of the Dusie Kollektiv.
1 - How did your first chapbook change your life? How does your most recent work compare to your previous? How does it feel different?
This is a great question. It didn’t. At all. That is what I want to say. But the way that it changed my life was realizing that it didn’t change my life. I remember getting the email from Jay at BookThug, and I had this wahoo moment. Then I looked around and everything was exactly the same. That’s when I realized that publishing wouldn’t save me.
On the other hand, better or worse, I have experienced the difference between being a writer with work in print and a writer without work in print. Perhaps the difference is all internal. I don’t know, though, that that’s true.
Re: recent work vs. previous work: it’s tough to sum up. Mainly because I have a number of projects in the works currently, and they differ differently. I think what is similar is a playfulness. I will hopefully always be playful, even when I’m deadly serious.
Different. Well, there are a few things that are much more visual than I used to be. Somebody said Brathwaite-esque or something like that in my use of type. Use of the page/space. I think I trust myself better. To go wherever the piece wants to go. I use more source material, research in my work now. I feel freer to experiment. I don’t mean to say that I’m pushing experimentation as a codified approach to poems. But, for me, to truly as we say blow the spot up. Trust the connections to happen for the reader if they are there within me or for me as I make work.
2 - How did you come to poetry first, as opposed to, say, fiction or non-fiction?

I don’t know that I did come to it first. I’ve written some stories. Personal stuff, even. But I have a poetic sense-making that doesn’t seem to belong anywhere else. I read Berryman’s huffy Henry hid the day and thought yup. Me too. Bazillion others, too, of course. He just popped into my head.

3 - How long does it take to start any particular writing project? Does your writing initially come quickly, or is it a slow process? Do first drafts appear looking close to their final shape, or does your work come out of copious notes?
Depends on the project. I do hand written prompt responses every week with the poetry class I teach in a prison. Sometimes that writing comes out pretty close to what it’s supposed to be. There is something to the purity of the stream when I write with these guys after an hour and a half of conversation and reading poems and talking and parsing and then okay let’s write on this topic for seven point two minutes GO! I don’t know. It comes tumbling out.
Then there are the projects that maybe I add one or two lines a month. I might be doing research and thinking thinking lots for those one or two lines. Seems ridiculous, really.
4 - Where does a poem usually begin for you? Are you an author of short pieces that end up combining into a larger project, or are you working on a "book" from the very beginning?
Not usually working on a book from the beginning, except when I am. That is to say I can have a sense or desire that a particular thought or topic or instigation will be a book, and it can dud out. With other projects I’m trying to shut it down, to end as quickly as possible. The current book I’m making only turned into a book when I was cramming as much as I could onto two pages trying to say okay the poem is done. The people looking at it at that time said, nice try Cara.
Keep going. That poem is now 86 pages.
5 - Are public readings part of or counter to your creative process? Are you the sort of writer who enjoys doing readings?

Then I’m over it and onstage and the work has a chance to take flight. There are some pieces that seem strictly suited to performance, others for the page or within a larger page work, and then there’s the overlap. I love making a crazy visual piece and trying to translate that into a performed piece. I don’t know if you can feature an image, but take this spot for example:

How do you perform that? But I so wanted to. And have!

An essay on writing called On Writing for a book John Madera’s putting together.
A script from the PEN Prison Writing Program for some benefit performances. In fact, I’m up against that deadline. The writing on writing is due shortly after.
The book length poem that started as two pages. It’s due out end of 2010, so I’ve got some time.
12 or 20 questions (second series);
Posted by rob mclennan at 9:53 AM
Labels: 12 or 20 questions, belladonna, BookThug, Cara Benson