12 or 20 questions: with Andrew Faulkner 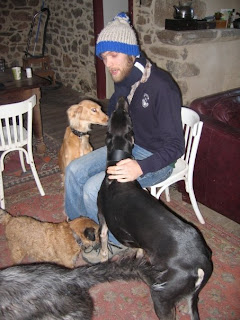 Andrew Faulkner lives with Leigh Nash in Toronto where they run The Emergency Response Unit, a chapbook press. His most recent chapbook, Useful Knots and How to Tie Them, was shortlisted for the 2009 bpNichol Chapbook Award. In this photo, he is telling stories to a pack of wild French dogs.
1 - How did your first chapbook change your life? How does your most recent work compare to your previous? How does it feel different?
The assembly of my first chapbook, Basement Tapes (with Nick Lea and Marcus McCann), meant that I had to learn how to staple in a straight line. My first solo chapbook, Useful Knots and How to Tie Them, meant that I had to decide which books to assemble first, my own or the other four we were publishing at the time. Mostly, that publishing is a big part (but only a big part) of the practice of writing.
My first full-length book will, I’m sure, change my life in more significant ways: it will win majors awards; bring me recognition; it will teach me to cook; it will do my laundry.
2 - How did you come to poetry first, as opposed to, say, fiction or non-fiction?

As a mode of thought, I have always been inclined towards poetry. It just took me a while to realize that in my brief attempts at fiction I was really writing poetry with a bunch of stuff between each poem.

3 - How long does it take to start any particular writing project? Does your writing intitially come quickly, or is it a slow process? Do first drafts appear looking close to their final shape, or does your work come out of copious notes?
I don’t have particular writing projects. My thesis is a project because it has to be, but at this point it’s all practice. I just write poems (and that takes a while; I can tinker at the edges for years).
4 - Where does a poem usually begin for you? Are you an author of short pieces that end up combining into a larger project, or are you working on a "book" from the very beginning?
A poem begins wherever – snippet of a phrase, an idea, whatever. I don’t write long poems, if that’s what you’re asking, nor do I have any grand schematic, just one poem, and then another poem, and another.
5 - Are public readings part of or counter to your creative process? Are you the sort of writer who enjoys doing readings?
I think readings are quite important. I’m also terrible at them. You learn quite a lot about something, though, by reading it aloud to people who have no particular stake in what it is you’re reading.
6 - Do you have any theoretical concerns behind your writing? What kinds of questions are you trying to answer with your work? What do you even think the current questions are?

Yes, though thankfully theories, like elastic bands, tend to be loose, stretchy, and mostly edges. Providing answers is such a limited and lacklustre thing for poems to do. There are particular thinkers, writers and ideas that provide excellent wrestling partners, yes, but a theory’s a grapple done in practice. Though, perhaps that’s not quite fair to theory, or else gives poems too much credit. In any case, my poetry is concerned.
7 – What do you see the current role of the writer being in larger culture? Does s/he even have one? What do you think the role of the writer should be?
A writer’s responsibilities are the same as anyone else’s: be a responsible citizen, reconcile our desires with our responsibilities. This, I think, is enough.
8 - Do you find the process of working with an outside editor difficult or essential (or both)?
Essential (though, what is an outside editor? Someone who’s not me?). Leigh is my first and best reader, and I have a handful of people whose opinions I value. Poems are often occasions for discussion, and working with an editor (or, perhaps more precisely, a close and interested reader) is one way of carrying out that discussion, or at least refining what it is a poem has to say.
9 - What is the best piece of advice you've heard (not necessarily given to you directly)?
I don’t think it was meant as a piece of advice, but: when Ryan Kamstra read at Pivot, he introduced a poem by saying (and I’m paraphrasing) “I didn’t exactly nail it but it’s still pretty funny.”
10 - What kind of writing routine do you tend to keep, or do you even have one? How does a typical day (for you) begin?
Ideally, I write and read every day, though this rarely happens; if I can do one of the two, I’m happy. Most days I say good morning to Leigh, the cat, a cup of coffee.
11 - When your writing gets stalled, where do you turn or return for (for lack of a better word) inspiration?
I try not to worry about having to write poems, so if it stalls then it stalls. That said, form is a fun thing to tackle. Bad imitations of good poems have led to interesting poems. Mostly, though, I read or do other things. Poems don’t have to happen and I’m ok with that.
12 - What did your favourite teacher teach you?
The better teachers I’ve had have taught me the importance of attitude and comportment in reading. That how you read is important.
13 - David W. McFadden once said that books come from books, but are there any other forms that influence your work, whether nature, music, science or visual art?
Music, though that often leads to a dead end. Things overheard, misheard. As part of her work, Leigh came across the words “flannel-mouthed,” which is what someone thought was “foul-mouthed,” which is obviously brilliant. Art and science, sure, it’s all good. And how can I not agree that reading produces books.
14 - What other writers or writings are important for your work, or simply your life outside of your work?

Durs Grunbein, Karen Solie, Kevin Connolly, Ken Babstock, Tim Lilburn, Dennis Lee. Robert Browning, Gerard Manley Hopkins. A.M. Klein, Al Purdy. Don Delillo, Fire Joe Morgan (for serious). Obviously a bushel of others. I’ve stolen more from some of my peers than they know: Marcus McCann, Nick Lea, Jeff Latosik, Elisabeth de Mariaffi, Jake Mooney, Leigh Nash.
15 - What would you like to do that you haven't yet done?
Leigh and I have a lot of things we’d like to do with The Emergency Response Unit we haven’t yet been able to do for want of time and an operating budget.
There is also the usual list of places to go and things to buy. I’d like more time to see my brother. There is lots of reading to do.
16 - If you could pick any other occupation to attempt, what would it be? Or, alternately, what do you think you would have ended up doing had you not been a writer?
Ideally, a left-handed relief pitcher: lots of time for reading, lots of time for watching baseball, occasionally throwing a ball around. You know, the good life.
17 - What made you write, as opposed to doing something else?
It’s the hardest thing I can do that I enjoy and that is also worth doing.
18 - What was the last great book you read? What was the last great film?

I’m currently reading through the manuscripts The Emergency Response Unit is publishing this Fall, and they’re pretty amazing. If these don’t count, then how about The Year of Magical Thinking. As for a movie, The Big Lebowski, but that only because I think about it often. I haven’t actually seen it in years.
19 - What are you currently working on?