12 or 20 questions: with Richard Truhlar 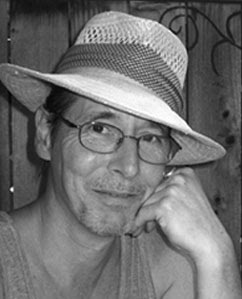 Richard Truhlar is the author of seven books: The Hollow and other fictions, The Pitch, Dynamite in the Lung, Figures in Paper Time, A Porcelain Cup Placed There, Parisian Novels and Utensile Paradise. He is a fictioneer, poet, text/sound/music composer, visual/concrete poem artist, and editor/publisher. A founding member of the sound poetry group Owen Sound and the electroacoutsic chamber music ensemble Tekst, he is presently the producer for the contemporary music label Centrediscs at the Canadian Music Centre. Visit him at http://www.richardtruhlar.com/

My first full book (as opposed to chapbook) was A Porcelain Cup Placed There (Coach House Press, 1979). Most of the books at Coach House, at that time, were seen through the press by a single editor. My first book was chosen by the editorial collective, which I believe then comprised bpNichol and Michael Ondaatje, among other well-known writers; so it gave me confidence to proceed investigating the type of writing in which I was engaged, which for lack of a better term could be called ‘experimental’. It’s difficult to compare that first book with what I’m writing now, because as a writer, I have no 'style', no 'voice'. Ever since I read Charles Olson and his essays on projectivist verse, I proceeded to explore the relationship between form and content. In my reading of Olsen, I perceived that he felt form and content should reflect one another; that content should determine form and, likewise, form should determine content in an organic way. This, to me, was a methodolgy to free me from the constraints of 'style' and 'voice'. It meant that I could write content in various forms, and create forms to house content. I was free from the 'authority' of the Author's voice, the narcissism that demands each work should 'sound' the same, be stamped in the author's 'style'. So I’ve felt free to write lyric poetry, experimental fiction, to compose sound poetry and concrete poetry, to pursue story-telling in various genres, as well as extreme avant-garde long-poems.

I didn’t. I began writing both fiction and poetry at the age of eleven.

It varies, depending on the writing project. I’m always writing; in the sense that throughout every day I’m thinking; and a thought inevitably leads to another thought; and these thoughts swirl around in my imagination, taking form in scenarios and language in my mind. It’s a type of osmosis that builds within me until I feel ‘full’; then I sit down to inscribe what’s already there, and it flows out effortlessly, fully-formed, with very little editing needed. At other times, when I want to base my writing in perhaps an historical perspective, I’ll do preliminary research and make notes; but then the notes themselves will enter into that process of osmotic development I just mentioned, because they’re just anchors to ‘reality’, while it’s my imagination that creates the work.

Most of the time my writing develops out of an idea or an intuition. Given the scope of these ideas and intuitions, they necessitate a more comprehensive development; such that most of what I write, whether short or long, is interrelated; so that I’m usually writing in larger macro-structures. Even though I might compose a number of shorter pieces, for instance, they are created out of an imaginative impulse to explore a larger terrain. An example would be my book of short fictions entitled The Pitch (The Mercury Press, 1992), which was a series of pieces that I wrote exploring the schizoid nature of human perception in an assumed reality which as H.P. Lovecraft says is “a set of pictures in the brain, among which there is no difference betwixt those born of real things and those born of inward dreamings.”

All of the concerns in my writing are on the face of my writing, are representative of my experience of reality, whether immanent or imaginative. If I explore in my writing, for instance, the nature of human perception in relation to language, it’s not theoretical, it’s based on my own perceptions and experiences.

I’m more interested in asking questions, since I believe the possible answers are implied n the questions one posits. My current question is: will my writing continue to grow each year like the perennial gardens I have planted in the yards around my home and which I tend carefully and knowledgeably.

rob – what do you mean by “larger culture”? Do you mean populist or popular culture, or mainstream media-recognized culture. However, in response, I don’t believe in a “larger culture” because since the beginning of the 20th century, and if, in fact, you mean “art” instead of “culture”, creative expression in the arts has continued to fragment, until at this point we find ourselves in a situation of many niches. From literature to music, there is such a unique proliferation of creative expression (and given the means to explore and availability of these expressions through the internet) that “larger culture” has become untenable if not impossible. If by “larger culture”, you mean all those readers who await the next pronouncement of Margaret Atwood – that’s just marketing and iconography.

Neither – a good editor will teach me what I’ve missed in revising my own manuscripts. A good editor, when you’re at my level of writing, is sensitive to the work and doesn’t want to change it; rather gives good advice regarding grammatical subtleties or linguistic expression.

“We have only moments to live.” – Jon Kabat-Zinn

I don’t believe in routine. See my answer to Question 3.

My own personal history is quite unusual in this regard. Every time I’ve been “stalled” or “blocked” in my writing have been occasions of illness, usually a severe flu. The illness has allowed me to break through the “block”, as if I needed the vulnerability of being ill to be free of constraints.

My family and cats.

Music has influenced my writing greatly; to the extent that some of the minimalist procedures of say Philip Glass and Steve Reich I have used as methodologies in composing texts.

There is nothing that is important “for” my work. If you are implying or mean what writers have or writing has influenced my work or that I greatly respect, I would say: Claude Simon, Alain Robbe-Grillet, Gertrude Stein, Franz Kafka, J.G. Ballard, Richard Matheson, et. al.

Since most writers in Canada cannot sustain themselves financially through their writing. So I’ve always pursued my livelihood through other means. For the last 20 years I’ve worked for the Canadian Music Centre as the producer of their sound recording label Centrediscs and the Manager of their Distribution Service for independent labels. I love contemporary concert music that has evolved out of a rich classical tradition.

Book: House of Leaves by Mark Z. Danielewski. Film: (an oldie) Once Upon a Time in the West – Henry Fonda plays one of the greatest villains of all cinema history (imho).

Posted by rob mclennan at 8:57 AM
Labels: 12 or 20 questions, Richard Truhlar, The Mercury Press