12 or 20 questions: with Chris Hutchinson 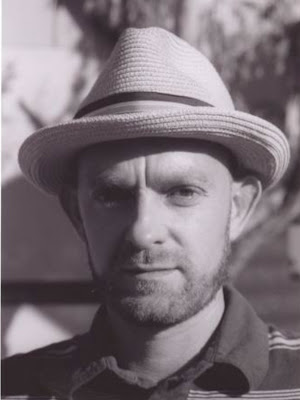 Chris Hutchinson was born in Montreal and has lived in Victoria, Edmonton, Nelson, Vancouver, and Phoenix, Arizona. He now resides in Kelowna, where he teaches English at Okanagan College. The author of two books - Other People's Lives (Brick Books, 2009) and Unfamiliar Weather (Muses' Company , 2005) - his poems have been translated into Chinese and have appeared in numerous Canadian and U.S. publications. Over the years he has led poetry workshops in college, high school, and elementary school classrooms.

My first book did not change my life. Perhaps a few people took me more seriously because my poetry now came as a product with a barcode. I did get the chance to go on a brief tour, reading in a few cities across the country, which was a blast. But then, after about two weeks of gallivanting around and playing poet, I was back to my job as a short order cook.

With my second book I was thinking more architecturally, more in terms of prosody; and I was reconsidering some of my assumptions vis-à-vis the lyric mode. I wanted to try new things, play around a bit, take some risks. I had decided that much of contemporary Canadian poetry was boring, including many of my own published poems, and that, if nothing else, I didn’t want to be boring.

I did not come to poetry first. Back in the day, I tried to write long, sprawling, self-mythologizing novels. It was the early nineties, I was living in Victoria, but I imagined I was living in Paris in the twenties. And in a way, I was. Poetry came later, and then the real trouble began.

My first drafts are pig slop. It usually takes me at least twenty drafts just to redeem myself. There are exceptions of course. Occasionally there are gift poems, the ones that miraculously appear perfectly healthy and fully formed.

A poem for me almost always starts with a line that floats in from who-knows-where and touches down on the page. If the line is good, if it’s a line I really like, I’ll try to write it a companion line, something to keep it company; and it goes on like that. Really, it’s a process of continual self-delusion. But the longer I fool myself, the more lines I write, and thus the more raw material I will have to toy with later.

I’ve been working on longer, book-section-length pieces lately, and this has required a bit more preparation and forethought than the writing of individual, discrete poems. But I’m not sure if the day will ever come when I deliberately sit down to write an entire book about ‘X’. I don’t like knowing what I’m doing or where I’m going. I can’t even stay in the same job or city for more than three years it seems. The fun of writing poetry for me is the not knowing of it all, the unpredictability of the process and the outcome, and the strange places poetry takes me. It’s a hard thing to try to explain on a Canada Council grant application form.

I enjoy the act of reading poetry aloud in front of people. I don’t mind a little attention now and then, a little company. Though there is something weird about moving from the solitude of writing to the public stage of performance.

Yes, all my work starts with the assertion that language is nothing more than a delivery system for political ideology.

I jest, but only partly. I am fascinated by theory, in a purely amateur sense—literary, political, social, etc. My readings in other disciplines have no doubt influenced my attitudes and beliefs about a great many things, including language and poetry.

I was recently talking with this young guy who is an accomplished academic and a talented poet, who told me, after much premising, that he wrote poetry in order to “redistribute wealth”. Ever since, I’ve been meaning to ask him if he was serious or joking, or if I heard him right.

For me, the current questions are: “What is poetry?” and “What can poetry accomplish?” and “Who the hell am I writing for anyway?”

In this they resemble the old questions.

In my Ideal Republic, the poet would play the following roles:

4. Recipient of large amounts of praise, money and affection

I think it’s essential to have another set of eyes look over my work near the end of a project. I have certain idiosyncratic blind spots.

Expect nothing. Write poems for the sake of writing poems. Eat well, and get some exercise.

I don’t move around that much, genre-wise. Occasionally, I’ll write a light-hearted book review or a close reading of a poem I like. I used to write fiction, but over time my prose lines morphed into poetry. I have friends who have encouraged me to write more critical prose, to enter that arena. But for now, I’d rather write poetry.

I get up at six in the morning and ride my bike to campus where I plan a variety of lessons for the day. I teach four different English courses, and I have over one hundred students. For the first time in fifteen years, I don’t have a writing routine. I have a teaching routine. So I write in between things now, sneak a few lines onto the page when I can. It continues to haunt me, this writing addiction; it finds a way.

My writing itself hardly ever ‘stalls’. But my relationship with my writing certainly gets derailed from time to time: life gets complicated and messy. But a writer’s task is to write through it all, regardless. I find inspiration in the act of writing.

I want to move on to the next question.

Books come from books, and poetry begets poetry, and money makes money—but what makes money make money? If poetry did not exist, would it be necessary, or even possible, to invent it?

Other forms that influence my work? I’m fascinated by the linguistic expressiveness I hear in certain jazz phrasings. And it makes me happy when conceptual artists make raids on fallacious cultural assumptions, values or beliefs. I love fashion and design, film, photography, architecture.... In terms of my own work, I don’t know how much I’m directly influenced by other forms, but I’m thrilled and delighted by any artist who can make my world bigger, stranger.

My life outside of my work?

I’ve always envied painters, their tangible creations, their well-lit studios, the physicality of the labour itself. Yes, for us lit-theory types, there is something called the “materiality of the signifier”; but whoever first dreamed this up probably had painter-envy.

I’m terrible at everything else. God knows how many other things I’ve tried to do and failed at miserably.

Other than marking college English papers, I’m plugging away at a new collection of poems that will undoubtedly puzzle editors, Canada Council Jury Members, and anyone who enjoyed my first two books. I’m hell-bent on obscurity these days. I should have been a pirate.

Posted by rob mclennan at 10:02 AM
Labels: 12 or 20 questions, Brick Books, Chris Hutchinson, The Muses' Company