12 or 20 questions: with Natalie Zina Walschots 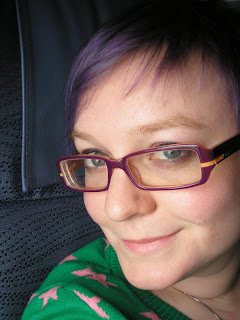 Natalie Zina Walschots' first book of poetry, Thumbscrews, was published by Snare Books in the Fall of 2007. Her newest manuscript, Supervillains, is nearly complete. Her work has recently appeared in Rampike, A4, Open Letter, Misunderstandings Magazine, Last Supper and ditch. She has served as the Managing Editor of both filling Station and dANDelion magazines. She also co-curated the Flywheel reading series from 2005 to 2008. Natalie currently serves as a board member for Toronto's Draft reading series. She is also a part of the collective behind Small Print, a workshop and reading series for young writers. Natalie completed her MA in English/Creative Writing at the University of Calgary. Her current base of operations is located in Toronto. She lives in a menagerie with several humans, two cats, and a dog.

My first chapbook was a self-published, hand-stapled, ugly little thing that I assembled when I was seventeen. That experience wasn't particularly life-changing, but it was certainly the product a light-bulb moment. I'd recently picked up my very 'zine on campus at the University of Windsor, and promptly took it apart. I was pleasantly surprised by how simply constructed it was. That was the first moment I realized that publication was not some distant and barely attainable goal, but something I could to myself. Popping my publication cherry early and ingloriously really alleviated a lot of the mystery and anxiety, and helped me get my work out in the world early and frequently.

Getting my first book published, having the object out in the world was great, but the really life-altering experience came in the form of the month-long tour I went on in the weeks following the launch of the publication. A couple of months before Thumbscrews came out, my publisher at Snare Books told me that there really was no travel budget to speak of, so if I could do a local gig and maybe come to Montreal for a launch there, that would be swell. Instead, two other writers (Ryan Fitzpatrick, whose book Fake Math was also published by Snare in the fall of 2007, and William Neil Scott, author of Wonderfull) and I put up our own money and spent four weeks travelling from Montreal to Victoria, performing in 11 cities (often more than one reading per city). That experience was absolutely incredible.

I was obsessed with poetic constraint while writing my first book, experimenting with all the dreadful things I could do to language, how tightly I could tie it up and still get some kind of a performance out of it. The resulting work is sexy and playful, but also dense and difficult. I've tied the knots a little less tightly in my recent work, allowed for a little more wiggle room, while still keeping things torqued and strange.

When I write, poetry falls out. Poetry is the natural byproduct of my picking up a pen or sitting in front of a computer.

While I'll often jot down notes or lines or phrases in a notebook, when I sit down to write I compose full poems at a time. I will edit those pieces extensively, and sometimes cut them all together, but the poems tend to emerge roughly complete. The first draft and final product are at least recognizable.

Writing the first draft is always the longest part of any project. Once I have that draft, I can go through massive edits relatively quickly, but the initial composition is always the slowest.

The basic unit that I tend to work with is a book. I don't write individual pieces that I then try to organize along thematic or structural lines to form a book. Instead, I start with an idea and an aesthetic, and then begin writing the pieces. I definitely ascribe to the “concept album” style of book building.

I love to do readings. I absolutely thrive on performance. I also find that reading a piece to an audience not only helps me develop a relationship to that piece but also helps considerably with the editing process. The first thing I want to do when I get off stage is hide with my stack of papers and make editorial notes.

If there is a primary concern that comes up in my writing again and again it is feminine desire. Whether I am writing about sadomasochism, food, or comic books, it always comes back to the language and landscape of desire. One shock that never seems to dull for me in the overwhelming belief that female desire is either alien and unknowable or completely non-existent. In response, I consider it a solemn duty to explore the landscape of my own desire as fully as I am able.

I am not sure about the role of “the writer,” but I definitely see my role as a writer as synonymous with shit-disturber. I see my work as being antithetical to everything safe and easy.

I enjoy working with an editor, though I suffer immense anxiety because of it. As soon as the editorial process actually begins, I love it. But actually handing over writing that I know needs to be improved to be read by another human being for the first time is enough to give me a panic attack. Once the writing changes hands, however, I am thrilled to receive any feedback and have no problem experimenting with just about any suggestion to see if it will improve the work. I also really dig writing workshops.

Probably that in poetry, form = content. Once I stopped looking at the structure and substance of my writing as separate constructs, my process opened up. Thanks, Prof. X.

While poetry is my primary genre, I am a big fan of work that operates within multiple generic constraints. My second manuscript, Tonsil Hockey, was actually a piece of poetic criticism. Like anything else, it can be easy to start using divisions like genre or sub-genre to draw party lines, and soon the poets aren't sitting with the fiction writers at parties (if they even go to the same parties at all). I think that's silly. I like shades of grey.

I am not at all a morning person. However, one of the few things that I can happily do before noon is write. Late mornings are one of the few times of day that I have exclusively to myself right now, and so it tends to be the best time to hunker down with a pot of tea and get some work done. My late morning writing tends to be of the editing persuasion, however, since my creative brain seems to sleep longer than my revision brain. My prime time for first drafts is after 10pm.

Wherever I was first inspired to start the book. For Thumbscrews, I would often interview members of the S&M community in whatever city I was living in at the time, or even just go to a S&M club and watch a show. Now that I am working on Supervillains, I can turn to comic books when I need to be jostled out of the place I've gotten stuck. When I am working on Gastroporn, my infant manuscript on food media and pornography, I cook something. Really, I choose the projects I do because they allow me to indulge my vices and call it research.

13 - Betty or Veronica or Archie or Reggie? Drive or fly (or sail)? Laptop or desktop?

Too many to name! I feel boundlessly grateful to be so surrounded by so many fearless, indefatigable writers in the Canadian literary community. My peers are a constant source of support and inspiration.

How much time do you have? There's a great deal of travelling I've yet to do; the next five books are laid out in my head, with several more in the embryonic stage; and there are an awful lot of roller coasters to experience. I also plan to earn my PhD.

I was absolutely convinced for a number of years that I was going to be a surgeon. I am still passionately interested in medicine and know that I'm going to mine that interest for at least one book. In another version of my life, I may have also become a performer of musical theatre.

Whatever other ambitions or aspirations I've entertained, the thing that I always come back to is writing.

I am currently absolutely in love with Susan Holbrook' Joy Is So Exhausting. I think the best movie I've seen this year is still Star Trek.

I am nearly done a full draft of Supervillains. This particular exploration of desire reaches towards narratives that reject the image of the hero as ideal partner and instead embrace the villain. The poems in Supervillains are “love” poems that re-appropriate the variously overwrought, hyper-scientific, and threatening language used by supervillains to create sexual vignettes that are at once arousing and disturbing. Evan Munday, mastermind behind Quarter-Life Crisis and illustrator of Jon Paul Fiorentino's Stripmalling, is going to illustrate the book.

great interview :) i love being introduced to poets that i was not previously aware of.