12 or 20 questions: with Damian Rogers 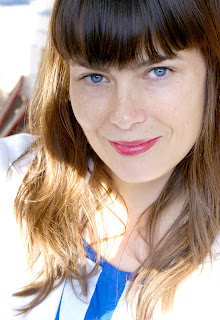 Damian Rogers was born outside of Detroit and lives inside Toronto. She holds a bachelor’s degree from the University of Michigan in Ann Arbor and a graduate degree from the Bennington Writing Seminars in Bennington, Vermont. Her poems have been published in Brick Magazine, The Walrus, MoonLit, Maisonneuve, Matrix, Salt Hill, and This Magazine. Paper Radio, published by ECW Press, is her first book.

It’s still very early days — I’m not even sure the book is in stores yet and my launch is next week — so maybe I could answer this question better after a few months or a year. The first thing I’m noticing is that after years of working as a journalist, I do find it strange to be on the other side of the interview process.

Well, technically I did write and publish nonfiction years before I published my poems, though poetry came first in other ways. My mother and my grandmother both loved poetry — Shakespeare, Dorothy Parker, ee.cummings, Frost, Dickinson — and read it aloud to me when I was a kid. One Christmas, my mother made me a folder of poems and song lyrics she photocopied out of books and I was just obsessed with it —I think I was about 12 and it inspired me to do an oral report that year in school on Lawrence Ferlinghetti. (Who knows what the teacher thought; I remember the whole thing was a little controversial, particularly his “Christ Climbed Down” poem.) I had a silver and purple “paint pen” (very popular with adolescent girls at that time, along with stickers of unicorns riding rainbows) and I wrote something really corny on the cover of the folder and drew something like a wine glass — something I thought looked sophisticated. I suppose my interest in poetry was a natural result of being wired for it and encouraged to take it seriously as a reader from an early age.

Some of my favourite poems have come in a single stream of thought and required little to no revision. Other poems I reworked for years.

Some ideas didn’t feel exhausted in a single poem — for example, I still feel like I could write more to the Last Shaker sequence by just tapping into that character and letting her talk — whereas many other poems are capsules of what my mind was wrestling with in the moments of writing them. There are a lot of repeated concerns, and that helped when I was shaping the book. And once I started shaping the book, some poems came forward toward the end of the process to fill in holes I felt needed filling.

I like performing. I hadn’t done many readings until this year when I started to read every month in a bar with my friend’s band. It’s been helpful in refining things, but I don’t know that it’s changed the process.

I think the baseline question is always the same — essentially, “how do we live in the world?” A more theoretical interpretation of that question might try to get up on top of the idea of consciousness. But I prefer following these (possibly unanswerable) questions rather than defending a theory.

I’m not sure how to distinguish the larger culture from the smaller culture and we all have roles, whether or not they’re united by trade or not.

Having said that, I remember a very entertaining interview that The Believer ran a few years ago
(http://www.believermag.com/issues/200503/?read=interview_doyle) between the writer Eric Spitznagel and the spirit of Sir Arthur Conan Doyle as conducted through Arthur Pacheco, a psychic and trance medium from Hawaii. (I was stunned and delighted that the piece approached this conceit straight.) In it, Doyle says something about the role of the writer as a leader and I love this, it seems impossibly grandiose, and yet if approached with humility, a very worthy aspiration. My sense was that he didn’t mean a leader like David Koresh or Jim Jones — or a self-help book author — but that the writer at her best is willing to walk down strange, unmarked paths and keep a record of what she finds. I immediately think of Dickinson, a woman whose friends and family would probably not have described as a leader of men or culture in her own time, but in the end, she inspired generations to follow her trail.

I have readers I trust and they often pinpoint the weak link that was bugging me or reassure me that some weird new tangent I’ve gone off on might resonate outside myself. But I’m also stubborn and stick to the stuff that sticks to me.

What other people think of you is none of your business.

I have had many different routines based on job and home situations and I don’t tend to be very consistent. Currently I’m craving a daily practice, but I’m going to have to become more disciplined to protect that time.

I’ve been blocked for a while — the whole process of finishing the book made me sit back a bit for the last many months — and I just found all these writing exercises from an email group I was part of two years ago. I used to be suspicious of exercises, but I’ve gotten some good poems out of them in the past and so I am planning on using them again, even if just to get things moving again.

I’m so sentimental I would either burn to death dithering over what to save or I’d just grab the cats and become a drifter.

So many that it makes me nervous to try and list them. I had a dream last night that my friend Gil Adamson was helping me negotiate some strange campus or city I was lost in and I felt like that was an obvious nod to how much I look to others to show me how to do this. I can’t imagine what I would have become without the work of other writers. Maybe a gardener.

I’d like to travel a lot more. I’d like to feel like I’m of service in some way. I’d like to study indigenous plant medicine and traditional spiritual songs from around the world. I’d like to be better at doing my laundry.

There are lots of other things I would like to be — a visual artist, musician, dancer, actor, filmmaker, comedian — but I was always too impatient with my own limitations. I think I responded well to the fact that the apprenticeship period for writing is pretty private — you can fail miserably in the comfort of your own home rather than on a stage in front of a hostile audience.

I’ve been going to anthologies a lot lately — they are big and heavy and I use them like bricks to patch together the gaping holes in my wall of knowledge. And I find the ways the multiplicity of voices arrange themselves around common ideas very exciting. My favourite at the moment is Poems for the Millennium Volume 3: The University of California Book of Romantic and Post-Romantic Poetry — it even has two Shaker vision drawings! — edited by Jerome Rothenberg and Jeffrey C. Robinson. I have been meaning to track down Rothenberg’s Technicians of the Sacred for ages. I might go online and buy that now, actually.

For some reason, the movie I keep thinking about right now is Coal Miner’s Daughter, but I feel like I should say something artier, like Cocteau’s Orphée, which is, in fact, one of my favourite movies. I love Orphée, but Loretta Lynn kicks ass. I could watch Sissy Spacek do anything and Tommy Lee Jones manages to make me feel compassion for a wife-beater. Plus, Levon Helm is in it.

Getting back to work.