12 or 20 questions: with Michael Crummey 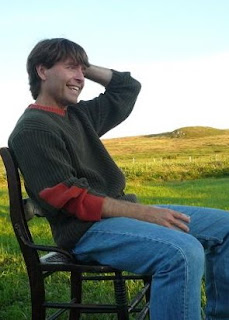 Michael Crummey has published half a dozen books, including Hard Light and Salvage (poetry), Flesh and Blood (short stories) and three novels. His first novel, River Thieves, was a national bestseller and was a finalist for the 2001 Giller Prize. The Wreckage, published in 2005 was also a national bestseller and short-listed for the Rogers’ Writer’s Trust Fiction Prize. His work has appeared in The Penguin Book of Canadian Short Stories and in The New Canon: An Anthology of Canadian Poetry. His latest book is the novel Galore. He lives in St. John’s, Newfoundland.
1 - How did your first book change your life? How does your most recent work compare to your previous? How does it feel different?

First book was a collection of poems from Quarry Press. Needless to say, my life, on the surface at least, didn’t change at all. But there was something profoundly different about my sense of myself as a writer, to have my work between the covers of a (slender but) real book.

Galore, in some ways, feels like a book I’ve been working towards my whole life. It’s completely different in style and approach from anything I’ve done before, but it was my attempt to get Newfoundland down on paper, warts and all. And just about everything I’ve done previously has flirted with this project in one way or another.

First year English at Memorial University. We did all poetry the first term and I got the bug. Sylvia Plath, Ted Hughes, ee cummings. Leonard Cohen. Wasn’t at all interested in writing anything other than poetry. And there’s still something about the process of writing poems that is more satisfying than any other form of writing.

Every book has been a little different. For the novels I do a lot of reading ahead of actually putting words on paper. With Galore I even took a lot of notes for characters and story lines. But once I start writing I just plow ahead. Galore was more or less written from start to finish and I didn’t even glance at the notes until I had a draft. Terry Griggs described writing a novel as pushing a peanut across a ballroom floor with your nose and that’s as accurate a description of my own process as I can imagine.

Very different for poetry and stories, vs the novel. Most of the poetry I’ve published in book form has been whatever’s around at the time that I think is worth putting out there, and the same was true of most of the stories in Flesh & Blood (even though they have a coherence imposed by being set in the same town). The one exception to that is Hard Light, which I set out to write as a book from the start.

The novels have all been conscious efforts from the beginning as well, with a pretty good idea of what I wanted to do and how the story was going to unfold.

But I think in terms of individual poems or stories or novels, there’s a lot of overlap. I often know how I want a poem to “feel” before I have much in the way of details (content, metaphor, etc). And novels are oddly similar in a way—I know the emotional arc I want a story to have before I know the details that give it shape.

Readings feel like a completely different creature to writing. But I don’t think its counter to the process. It’s just a different animal. I used to be completely terrified at the thought of them but have gotten over that. Manage to enjoy them for the most part these days.

Nah. I’m just killing time, mostly. I think every book brings its own set of questions and concerns. The Wreckage was, in some ways, a response to the events of September 11th, 2001 and the American reaction to it. So I was interested in asking questions about what happens to us when we divide the world into us vs. them, when we identify a particular group as “evil”. Galore is kind of an attempt to figure out what it means to be a Newfoundlander: when did the Irish and West Country English and French and Jerseymen and Scots stop being those things and start being Newfoundlanders. What kinds of things carry forward from one generation to the next and how does that make us who we are?

But there’s nothing particularly theoretical that runs through all my writing. That I’m aware of, anyway.

(That’s your own fault for asking that kinda question.)

I’ve worked with the same editor on all three novels (Martha Kanya Forstner at Doubleday) and that has been my favourite part of the writing process in all three cases. She has the ability to ask questions about the work that open it up in ways I’m unable to do on my own, without ever imposing some notion of what she thinks should be happening. All my experiences with editors have made my books better, although some have been more painful than others.

I started writing fiction years after I was into poetry. And avoided fiction partly because I knew how painful it would be to start from ground zero with a different genre. It’s like learning to walk all over again. With someone else’s legs. Over hot coals.

Fiction and poetry feel like completely different undertakings to me. There’s plenty of cross-over of course. But poetry feels far more meditative whereas fiction is heavy lifting. One feeds me, one beats the snot out of me.

Married with kids, so routine is my life. Generally I have the time between when the kids go to school and when they get home, so I try to make the most of that. Although I’m a slow starter and usually watch an hour of Sports Center before I sit down to write. For Galore I set a 500 word minimum per day just to force myself to do something every day. Even if you delete 450 the next morning, you have 50 words you wouldn’t have had otherwise.

When I’m not able to write it’s usually because I’m beat out. So I just let it ride. Watch a lot of bad television. Go downtown. I always have a fallow period after a big project which feels like the batteries recharging. And in the middle of a project as well, sometimes a month or more will go by where I don’t write a word. Used to make me feel panicky but have learned to live with it.

I don’t know. I’ve written some poems that could be called nature poetry, I guess. And landscape plays a big role in all my writing. But that feels no different from the fact that work and sex play big roles. It’s there, you know, I’m just trying to deal with what’s in front of me.

I do listen to music as I’m writing and sometimes a line will steal into the narrative. Dylan, in particular. But there are always other books at the root of my own.

This keeps changing. My favourite writers change all the time. I guess we’re looking for different things at different time in our lives, or we’re ready for different things. Some of the writers that I used to love are almost unreadable when I go back to them. First time I read McCarthy’s Blood Meridian I thought it was the best book ever written. Went back to it a few years later and thought it was baroque and over-wrought and unconvincing.

So with that in mind, my current faves include: Gabriel Garcia Marquez (slowly making my way through his books and can’t believe I managed to get this far in life without them). Mavis Gallant (gigantic). Just read Raymond Chandler for the first time and couldn’t believe how good the writing was. Line by line as good as Hemingway or Carver.

Don’t have a lot of items on my wish list. Saw Leonard Cohen in a thousand seat theatre here in St. John’s last spring and ran my first marathon last Sunday, so the list is even shorter than usual.

Nothing. Have never had another interest. Can’t imagine doing anything else (and even writing seems pretty frigging unlikely).

Probably something by Marquez. Chronicle of a Death Foretold.
Saw Butch Cassidy and the Sundance Kid on AMC a couple of months ago. Still the best ending in movie history.

Answering twenty questions (actually, closer to fifty-eight) from some yahoo in Ottawa. Outside of that, trying to take it easy for a little while.
12 or 20 questions (second series);
Posted by rob mclennan at 9:00 AM
Labels: 12 or 20 questions, Doubleday, Michael Crummey