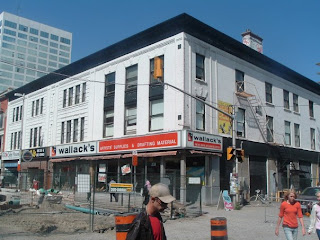 It might not look like it once did, due to the construction, but this building has been home to a whole range of great art over the years, originally said to be a hardware store by some, and a grocery store by others, this building at the corner of Bank and Lisgar Street was built in the early 1900s currently houses the main location for the family business Wallack's Art Supplies. Opened in 1939 by Samuel Wallack (before he took over the business next door and expanded), his son, John moved the business into its current location in 1977, and now boasts eight locations around Ottawa, Gatineau and Kingston, as well as Wallack's Gallery (203 Bank Street) just down from the supplies. Just above Wallack's is Invisible Cinema (391 Lisgar Street, upstairs, 237-0769), a gallery space that doubles as a video and dvd film rental, including some of the best offbeat titles you can't usually find at the big chains. Their current space previously housed artist-run centre Gallery 101 during their 1980s heyday of artistic director Dennis Tourbin, with regular performances by avant-garde writers from across Canada and beyond, hosted by Ottawa's Experimental Writers Group (EWG; Rob Manery and Louis Cabri) under the name The Transparency Machine. Both have gone on to do further events in other cities, as Cabri headed to Philadelphia in 1994, where he hosted the reading/internet series Phillytalks, and Manery left in 1996 for Vancouver and the Kootenay School of Writing. Before Gallery 101, the space was used as a bookstore space owned/operated by the late Ottawa writer and photographer Richard Simmons (no, not that Richard Simmons), who was also a curator at the Vancouver Art Gallery in the 1960s; Simmons was not only known as the first curator of a public space to purchase work by Greg Curnoe, but he was also around for the beginnings of 3cent pulp (the pamphlet precursor to Arsenal Pulp Press), with the later version, Pulp Press, even publishing his novel, Sweet Marie. Back when it was still a gallery, it was where I started my "poetry 101" series around 1995 or so, what eventually developed into The Factory Reading Series in the next Gallery 101 location on Nepean Street, and since moved to the Ottawa Art Gallery, hosting readings (and even a launch of my former writing & visual art magazine, Missing Jacket) by Sheri-D Wilson, RM Vaughan, David Scrimshaw, Joe Blades, Grant Shipway, Dayv James-French, Jim Larwill, Sean Johnston, Catherine Jenkins, Christopher McPherson, David O'Meara, Tamara Fairchild, David Collins, Michelle Desberats and others.

The apartments on the second and third floors of the building are beautiful hardwood floor studios, have housed a number of writers and artists over the years (as well as filmmakers, a paleontologist and a stand up comic), both as living and working spaces, including the poet Michael Dennis, and artists of all sorts over the years, including former and current residents Dan Sharp, Jennifer Dickson, Jeff Wannacott, Richard Nigro, David Cation, David Cooper, Andrew Farrell and Adrian Göllner. I could even mention the short film that never got finished, a whole Sunday afternoon of Ralph Gethings' film shoot around 2002, the camera catching the action of two characters driving by in a car, and me as the devil, smoking a cigarette while standing on Lisgar Street, just outside the Bible shop…
http://www.ottawaartgallery.ca/factoryreadingseries/index-en.php
http://unknownottawa.com/
Posted by rob mclennan at 10:05 AM
Labels: Dennis Tourbin, Louis Cabri, Michael Dennis, Ottawa, Ottawa: The Unknown City, Rob Manery