Over the past few weeks, I’ve been reading far more fiction than poetry, working through various ideas of prose as I put the finishing touches on my second novel, due out this fall. Now that the (hopefully) worst of my recent stint with bronchitis is over, here’s some of what I’ve been dipping into lately. 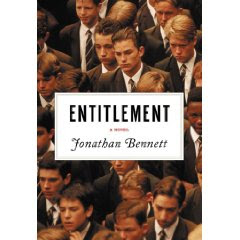 The first I’ll mention is Jonathan Bennett’s novel Entitlement (Toronto ON: ECW Press, 2008), a lovely hardcover book that had been months sitting atop my filing cabinet, in the corner of my office. I’ve known Bennett for years, but this is the first book of his fiction I’ve read, despite being his second novel and third book of fiction after Verandah People (2003) and After Battersea Park (2001), as well as a poetry collection from the same publisher, Here is my street, this tree I planted (2004). I usually don’t find plot-driven, narrative heavy novels my thing, but Entitlement is a compelling and well-constructed novel, each fragment revealing only as much as Bennett needs, piece by revealing piece, bringing you in quickly, and then keeping you there. This is a mystery that isn’t a mystery, writing the story of Andy Kronk, a man who has managed, somehow, a “clean break” after a lifetime intertwined with one of Canada’s wealthiest families, the Aspinalls. Triggered by a journalist working to write a “tell-all” biography of the family, Andy Kronk starts to tell his story, and very soon, ends up telling too much, about the Aspinall patriarch, Stuart, to Stuart’s grown children, Colin and Fiona, and just how intertwined their lives had become.

Stuart Aspinall stepped off the cobblestone pathway and onto the dewy lawn. The hill before him faded to the lake’s edge at Huntington House. He padded his way toward the cream-coloured boathouse, his leather oxfords black and shiny, hands casually in the pockets of his suit pants. It was an unseasonably warm day. At least it was when he felt the direct sun on his clean-shaven cheeks and neck. He had removed his jacket and tie, left them in the foyer of the house.

He often came down here to think before dinner. It was the half-hour a day – not every day but often enough – that he saved for himself. Reaching the boathouse, he sat on the burgundy Muskoka chair angled at the lake’s centre. The lap of the water against the dock was rhythmical. Far away a loon called out. Light wind played the branches of the firs down the way.

Lately, he’d felt the unease. Felt it deepening within him. He knew its source and cause too well. It was almost as old as Colin himself. A chronic, imprecise hurt that a woman might call heartache. He chose, long ago, not to address it directly. Rather he monitored it, weighed it, and negotiated it down, always down, into a manageable size. If it were true that the child was lost to him, and it sadly was, then he had always supposed that one did what one must, to go on. To cope, as it were. Why did the two of them engage in such emotional sport that had no clear rules and never ended? Fact: Colin is an Aspinall. That cannot be changed. So he mustn’t hurt the family, or weaken the name.

How does he do it? Most books like this don’t have the clear craft that Bennett clearly does; plot-driven novels are often devoid of real skill when it comes to language, even falling to lines that work themselves barely over their own function from point A to point B, unable to keep some readers from skipping over whole passages, whole pages, just to get back to the action, but Bennett is able to keep the music of each line subtle, underscored. He manages the music of the line in such a way that you can barely hear it, but know it is there, helping the movement of the story itself along.

After reading her recent any other woman: an uncommon biography (Edmonton AB: NeWest Press, 2008) [see my note on such here], I found a copy of Newfoundland writer Monica Kidd’s second novel, The Momentum of Red (Vancouver BC: Polestar, 2004), which, unfortunately, the author recently told me had been remaindered. Is this what now happens to books? Kidd’s novel goes back and forth through two sides of a relationship between a father and daughter, watching Randy and Mary from different points in their lives, what brought them to this present. We watch as Randy starts his relationship with Mary’s mother, marries and carries on, loses his wife in childbirth, and further on, as the years progress. The other thread exists in the present day with adult Mary, still living with her father, who hangs out with her friends, has a job, and meets a man who she eventually moves in with, and where that eventually ends. Here is the little prologue to her novel, written from the father’s perspective:

LOVE CAN BE SO FIERCE IT WILL RIP FLESH FROM BONE.

My little girl came into this world glowing with the finality of love, pulled hot and slick from a pool of blood. Her mother lying there, the sweat cooling in the heavy curls over her eyes, her ears, the weight of her sinking lifeless into that steel table, gone from this world. All I could think of was that blistered old statue in the church. Heartsick Mary, weeping at the feet of Jesus. So that’s what I named her. I kissed her mother goodbye, hushed my little girl and named her Mary, and took her by the hand into the world.

I knew then that nothing would ever come between us.

I like the way this book moves back and forth between stories, telling us exactly why the Randy of today, for example, reacts in a particular way, showing us a story of what happened to him ten years, twenty years, twenty-five years earlier, and the stories his daughter might never know, or simply doesn’t know yet. I like the way this book moves gracefully and with great ease between difficult moments, a collage of photographs written in an order not out of order but not entirely straightforward, resulting in an impressive album. With this novel remaindered, will she have any choice but to write another one?

A while ago, I read Toronto author Ken Sparling's [A novel by Ken Sparling] (Toronto ON: Pedlar Press, 2003) [see my note on such here], the author of the previous novels Dad Says He Saw You at the Mall (New York NY: Knopf, 1996) and Hush Up and Listen Stinky Poo Butt (self-made by author upon request), books I haven’t managed to get my little hands on yet. What I have read recently is his more recent novel For Those Whom God Has Blessed with Fingers (Pedlar Press, 2005).

At first I thought this was cool. I told all my friends. Showed off. Threw my pens away. Dropped them into potholes. Swallowed them. Shit them out. Flushed them. Days later, I went and found them.

Then I got to wondering. Was I squandering what God had given me? Maybe I should try to use this gift. Do something good.

I went to get my pen from the puddle on Bay Street. Saw a man enter the sub shop at Cumberland. His clean well-lighted face clear of any fear. His woman passing through the sub shop door behind him. 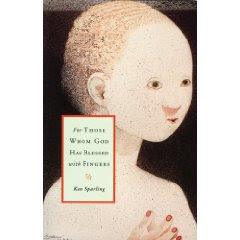 What a strange little novel this is; I’d like to learn more about this Ken Sparling. Presumably a response to his publisher’s request for catalogue/book copy, he wrote this short blurb, subsequently placed on the back of this book: “There is no way to describe the book, short of writing the entire thing out by hand. I have put a great deal of loving devotion into creating something that is just itself and I do everything I can to foil the evil plans of villains determined to summarize and label everything they lay their eyes and minds upon.” What makes Sparling’s writing, and thus this novella, interesting, is in how the book can claim to essentially be about everything and about nothing at the same time, writing about the world, about thinking, about human relationships, and about writing itself, and how books are made, wandering from fragment to fragment in ways that fool the mind into thinking they’re disconnected, and then fool the mind further by putting them together into a single unit. I think this is a magnificent and difficult work, and would like Sparling to write another one, so I can have something for my own writing to aspire to.

As I pick up my book, I know something. Each time I pick up my book, I know. I have knowledge. Un-deconstructable knowledge. Knowledge that fully resists analysis. Carnal in that respect. At best, I can muster a temporary bravado concerning this knowledge, a false platform above the abyss constructed of the knowledge that I can never know. I can fake it with conviction for a time, in other words. I can stand. Walk. Polish an apple. Even take that first bite.

After rereading Michael Ondaatje’s In the Skin of a Lion (1986), perhaps one of my most favourite novels, a year after rereading his Coming Through Slaughter (1976) [see my note on same here], I decided I should pick up his more recent Anil’s Ghost (2000), another book relegated unread for years, stacked on a bookshelf in my kitchen. In Anil’s Ghost, all the regular Ondaatje constructions held, his forceful, illuminating and elegant lyric prose, his sensual passages, a character working through the bonds of her own history, and a savvy political undertow that doesn’t overtake any part of a narrative that exists in a pastiche of characters, settings, and points-of-view. Yet why doesn’t this book strike as much as some of his earlier works? Why do I care for everything he’s doing, but somehow, the whole doesn’t hold together the sum of its magnificent parts? (I’ve heard mixed things about the last novel too.) Still, is there something I’m missing?

She arrived in early March, the plane landing at Katunayake airport before the dawn. They had raced it ever since coming over the west coast of India, so that now passengers stepped onto the tarmac in the dark.

By the time she was out of the terminal the sun had risen. In the West she’d read, The dawn comes up like thunder, and she knew she was the only one in the classroom to recognize the phrase physically. Though it was never abrupt thunder to her. It was first of all the noise of chickens and carts and modest morning rain or a man squeakily cleaning the windows with newspaper in another part of the house.

As soon as her passport with the light-blue UN bar was processed, a young official approached and moved alongside her. She struggled with her suitcases but he offered no help.