The Capilano Review 3.7 ; LESS IS MORE: The Poetics of Erasure

Recently produced as a collaborative effort between The Capilano Review (as issue 3.7) and SFU Gallery) is “LESS IS MORE: The Poetics of Erasure.” As Ariana Kelly and Bill Jeffries write in the introduction to the issue:

The exhibition of Less Is More: The Poetics of Erasure and the issue of The Capilano Review published on the occasion of the show, emerged from three or four sources. Back in 2006, at the time when the SFU Gallery was already considering an exhibition organized around Tom Phillips’s erasure project A Humument, erasure practice in both Vancouver and Seattle was expanding to the point where it seemed more interesting to explore these local practices along with what Phillips had done. Then, while considering an expanded show, several key parts of Kristin Lucas’s exhibition If lost THEN found at the OR Gallery in late 2006 served as another reminder that artists were erasing almost as frequently as poets. These catalysts suggested that the time was right to introduce erasure to a wider audience through an exhibition and a book. The Less is More… project stakes out a claim for erasure methodologies as an apposite cultural critique at the current political and ecological juncture. Erasure exists in a wide range of forms and it is the purpose of this publication, and the exhibition on which it is based, to explore some of the modes of creative removal undertaken by poets, writers, and artists living and working in the age of information overload. 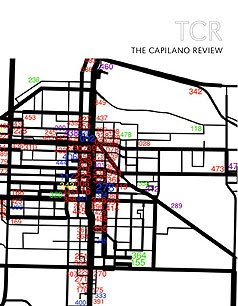 How does this relate to, say, Gregory Betts’ “Plunderverse,” a variant itself on erasure, but without the obvious spaces between what texts remain, or even a variant on the recombinant works of writers such as Margaret Christakos? The issue includes visual and text works by contributors such as Clint Burnham, Tom Phillips, derek beaulieu, Kristin Lucas, Monica Aasprong, Jen Bervin, Oana Avasilichioaei, Stephen Collis, Erin Moure, Sarah Dowling, Aaron Vidaver, a.rawlings and Alexandra Dipple, as well as a series of notes and statements included at the end of the issue. I’m fascinated by statements written by contributors, and I remember an issue of dANDelion a few years ago (Number 2, Volume 29, “the poetic project.” Calgary AB, 2004) that included the same, by various contributors. What really makes the current slate of statements is how a couple of the contributors, such as beaulieu and Moure, talk not only about their selections in the current issue, but ideas that have been increasing through their own works over the past few year. beaulieu himself starts his very simply: “My writing is taking me further and further from ‘writing.’ Writing has become for me a record of reading.” Writing about her own piece, “Gallerypark,” which became a part of her second poetry collection, feria: a poempark (Toronto ON: Wolsak & Wynn, 2008) [see my review of such here], Montreal poet and translator Oana Avasilichioaei begins her statement with:

I walked into the park. I walked into erasure. The park had been made into architecture. Again and again. The process was homage; the process was violence. Grass to building to rubble to flower trellises to building to waterways to statues to grass. The park was an homage to all the parks it had been, its terrain inscribed and fractured, then partially erased and altered, then inscribed and fractured again. A stream became a meadow became a barrack became a pond. The park was an additive and subtractive accumulation of time and landscape and we sat in its midst, knocking our kneecaps and scraping our shoulders against these fractures. We were strangers, yet we were all marked by the park’s flimsy architectures of time. We ourselves were time, erased and inscribed, always in process.

The issue is also beautifully-produced, including a great deal of visual works, photography and full-colour images, with one of the most attractive journal covers I’ve seen in a long time, with a detail of Jamie Hilder’s “Paths and Places” series. What the issue really highlights is just how much writers and artists, I think, are forced to work with the tools that already exist. There is nothing new under the sun, certainly, and sometimes the only response to using all the known words and images and ideas that exist in the world that everyone else also has access to is to find new ways to move them around, conceptualize them, and, through the arrangement, find new ways to speak out of the old.

THE OWLS OF NORTH

Snowy Owl. Snowy Owl. Other Snowy Owl. More in former times to show of the without. Owl for. Ermine Owl. For white ermine for the it on ermine. Owl. White Owl. The White Owl. for this owl. For its White Owl its White Terror of the North for its with of the. Is not only the North owl, one of the most owls in the entire. From there is only two other within its for it. One of these is the Owl, in its, some to the Snowy Owl. The Owl, however, is tufts in the Snowy Owl, more the other to some is the White is with more. The Willow in its winter the Snowy Owl. in the Snowy Owl is white, more or less with see. Rest. The Snowy Owl is most often seen on the or on rise (when it to on low of). It very smooth – there tufts, the very. It in the stiffly so often the Owls to its well sometimes to the the even lower on the. It sits never on its the more White. Eyes Vision. The vision of the Snowy Owl is of other North owl, in the most. This owl lemon-yellow the eyes set to the of the in other, they will more often not they to the or or, to some, or even when the owl its eyes in. (a.rawlings, “from The Owls of the North”)