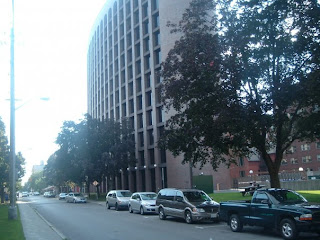 There were a number of places my mother's family lived when they arrived in Ottawa, after living in Kemptville and Brockville, that somehow, every time they moved out, the house was torn down for the sake of something else. The house at 189 Hawthorne Avenue was torn down to build the on-ramp for the 417 at Lees Avenue, and their later house in the Alta Vista area, originally called 1284 Kirk Drive when they arrived in the mid-1960s, soon turning into 1293 Ridgemont Avenue, was torn down after everyone finally vacated in the late 1990s, for the sake of the new owners building a smaller house on the same lot.

In between those addresses, my mother lived in a house at 233 Gilmour Street with her parents and various siblings, when she attended the Elgin Street School, and, until she dropped out, Lisgar Collegiate. What became the "squatter house" in the early 2000's was where my mother's best friend lived, back in the 1960s, and apparently Bouchey's Market has been there for generations, back to at least the 1940s, owned and operated by the same family?
When they finally vacated, the house was torn down for the sake of this, the public service building that looks like a giant oval ship. Wouldn’t you rather a family home in the same location?
http://robmclennan.blogspot.com/2006/03/from-address-book-erasure-fragment-of.html
http://robmclennan.blogspot.com/2006/06/my-mother-alan-ladd-i-was-on-phone.html
http://unknownottawa.com/
Posted by rob mclennan at 12:53 PM
Labels: Ottawa, Ottawa: The Unknown City