sentence: a journal of prose poetics

My father liked a bad joke
with a Japanese prisoner
over a makeshift fire
better than his own barrack.

He never spoke
of the celebrated
Daibutsu Buddha.

New Year after the Emperor’s surrender, on the Nara to Osaka train. My father strikes up a conversation, in pidgin, with a Japanese couple, smokes cigarettes with them, jokes with their little boy. Hands him a chocolate bar like he’s bucking for “B” battery’s Good Samaritan Medal. God knows he’s grateful there was no landing, as planned, on southern Honshu, with him on the front line and 90 percent casualties a “given.” Nineteen at the time, he only wants to go home to York, Pennsylvania, teach high school history, watch Laurel and Hardy at the Saturday matinee. He believes in the Emerson Emerson would have him believe, and as luck would have it, is one of the few Gis in the 368th field artillery who wouldn’t have a go with her when the husband grins and says to him “My wifu…you pom-pom,” grinding his right fist in his left hand so my father cannot take his meaning wrong. (Steve Myers, “Haibun for Smoke and Fog,” Sentence #5) 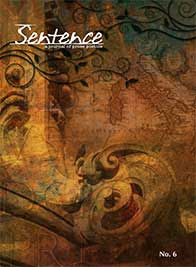 Lately I’ve been fortunate enough to go through five of the first six issues of the annual sentence: a journal of prose poetics published by firewheel editions out of Western Connecticut State University in Danbury, Connecticut, and edited by Brian Clemens. As the back cover states, one of the objectives of the journal is, along with continuing the previous work started by Peter Johnson’s The Prose Poem: an International Journal, to “publish work that extends our conception of what the ‘prose poem’ is or can be.” I’m intrigued by this, since the category of “prose poem” seems far more prevalent in American writing than it does in Canadian (although note the pieces in issue four by Ottawa-born Margaret Atwood). Could this simply because the movement here hasn’t been tracked? Each issue reads almost like a complete unit, publishing new writing that move into a range of what the “prose poem” could be, being far more than a poem without line breaks (for example). Is this what David W. McFadden or Stuart Ross would be doing if they were American writers? I know Gary Barwin has certainly done some interesting pieces here and there, and I’m sure I could think of plenty of other examples of Canadians working the same if I really thought about it. The piece above, for example, reminds of some exceptional haibun done by Fred Wah and bpNichol. As Johnson himself writes in his introduction to the fourth issue of sentence:

Thirteen years ago, I couldn’t give away a copy of The Prose Poem: An International Journal, and very few books of prose poetry were being published. Those of us who were writing those unpublished books used to share rejection letters, rating them according to levels of stupidity. But things have changed. Last year two first books of prose poems received, respectively, the Walt Whitman Award and the Agnes Lynch Starrett Prize; and three out of the last give James Laughlin Award winners were books that consisted mostly, or exclusively, of prose poems. Nowadays, it’s hard to find a book of poetry that doesn’t include a prose poem or two. The recent rise of the prose poem is the best and worst thing that has happened to American poetry. The best because poets now feel comfortable moving between prose and verse, the worst because prose poems are multiplying faster than cockroaches, and, in this respect, quantity doesn’t equal quality. Maybe this proliferation of prose poetry accounts for why so many poets are disassociating themselves from the genre by inventing more names for what they’re writing than by Book of Slang has for “penis” and “vagina”: microfictions, poetic prose, short-shorts, narratologies, and so on.

We might not have the same hold to “prose poems,” but I can certainly attest to the prevalence over the past decade or two to Canadians writing “short shorts,” “postcard fiction” and other small version of the same, coming often to the same conclusions but from the directions of fiction.

My mother told me if you bury something in the backyard, a toy truck or a small metal soldier, you will not find it there two weeks later. She said the sand is always moving, cycling—that the stone you find near the fig tree is from China or Istanbul. That the toy soldier will reappear 50 years later, slightly wet, salty. (Michaela Kahn, “If I ring my body like a bell of coins, will the shock waves of that sound cause oil rigs & volcanoes to erupt?” Sentence #6)

In the sixth and most recent issue, one of the works that really stood out had to be by Illinois poet Amy Newman, writing her “prose poems” as a series of cover letters, each written as though they were stand-alone, ignoring the rest, and have a magnificent blend of form and function. Does this mean the work she writes about (mentioned not here but in the other letters, supposedly sent into the journal for consideration) doesn’t exist?

This morning when I went out to collect the leaves from the back deck, the slope of the yard was unconvincing and nameless. How am I supposed to know enough to make something happen on a page that will convince me of anything? And then a red tailed hawk creased the eye vision and startled a show of darkish squirrels who were hunting acorns the big tree had lost from its moorings of fantail leaves. And the world parted its curtains, its scratchy and difficult weave, and a deer entered from stage left. Everything could have been still, and remained still, under a blank page of cloud and above the random field of unconcern that is where I live, and I would yet be there absorbing the about-to-happen, until I wrestled in my head with presentation, and the deer noticed my breathing; a pinioned ear swung brown cones and dials and the curtains began their snap shut. But the deer’s coat glossed like a television, and a kind of word appeared on its side, some series of symbols I could have used to tell you. My mechanisms clacked and bent but the pattern on the brown body didn’t speak in our easy and flattened alphabet. Instead, it showed glare and depth, something dimensional and respiratory, which music and a story behind it, the etymology of person meeting deer, it maintained several possibilities at once, and sustained—if I had had a Motorola V620 © phone with Integrated 300K camera with 4X zoom at the ready, the poem about the world could have been taken as it was rendered in that deer’s word-like body. Whatever it knew and showed in creamy gloss I could not cipher or translate or hold. It swifted with something like or disdain into the back of the world behind the house.

Thank you for your consideration, and for reading. I have enclosed an SASE, and look forward to hearing from you.