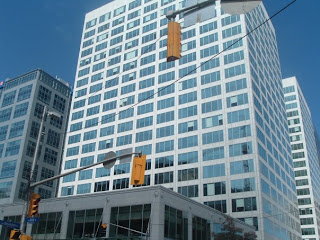 There is a story of the late poet John Newlove still living in Vernon, British Columbia with his wife Susan in 1986, and being told by his doctor, if you keep drinking like this, you'll be dead in six months. He called his friend John Metcalf in Ottawa for help, who, through his wife Myrna, got him an interview at the Department of Official Languages, housed in one of the two office towers of L'Esplanade Laurier, at the corner of Laurier and Bank. Of course he showed up drunk off the plane, and Metcalf had to clean him up before the interview, which he managed to ace. Newlove worked there from 1986 just up to the point of his stroke in 2003, and Colin Morton's wife, the writer Mary Lee Bragg, has stories of cartoons that he liked from the New Yorker, that Newlove would fax to her office in another part of the same building.

I used to see him regularly get off the #2 bus at Bank and Gloucester, back when I wrote in the Dunkin' Donuts every day, as he would see me, nod and even wave his cane before he slowly made further way. He even came in once or twice to visit, but those moments were rare. Once he did, and my friend b stephen harding already visiting, asking John to explain Monty Python to him, a humour he has yet to comprehend. John paused, and told bruce to imagine a group of world war one soldiers in a trench about to go over the top, and one private had an umbrella instead of a rifle. When asked about this by his superior, the private replied, but sir, what if it rains?
http://www.chaudierebooks.com/books/argument.html
http://unknownottawa.com/
Posted by rob mclennan at 10:02 AM
Labels: John Newlove, Ottawa, Ottawa: The Unknown City