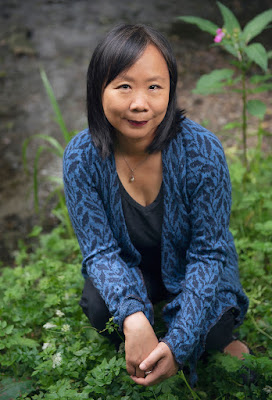 Fiona Tinwei Lam has authored two poetry books and a children’s book. She edited The Bright Well: Contemporary Canadian Poems on Facing Cancer and co-edited Love Me True: Writers Reflect on the Ins, Outs, Ups & Downs of Marriage with Jane Silcott. She has won The New Quarterly’s Nick Blatchford Occasional Verse Contest and was a finalist for the City of Vancouver Book Award. Her work appears in over thirty anthologies, including The Best of the Best Canadian Poetry in English: The Tenth Anniversary Edition and Forcefield: 77 Women Poets of BC. Her poetry videos have screened at festivals locally and internationally. She teaches at Simon Fraser University’s Continuing Studies. Odes & Laments is her third collection of poetry. fionalam.net

My first collection, Intimate Distances, was launched the same year I gave birth to my son. To become a mother and also be publicly acknowledged as a poet and a writer represented a double blossoming in my late thirties. Not having had any expectations, I was quite surprised by all the good things that arose as a result of the publication of the book—invitations to give readings, a City of Vancouver Book prize nomination, reviews, interviews, etc.  I am thankful for all the small literary presses across the country that keep putting out beautiful, powerful, provocative books of poetry despite the challenges.

My latest collection of poems, Odes & Laments, was inspired by Pablo Neruda’s wonderful Odes to Common Things (Odas Elementales), and by a desire to write poems about human incursions upon the natural world.  Many of the new poems explore ordinary things (e.g. pencils, plates, pockets, chopsticks, etc.), while others are laments about the current state of the world due to climate change and environmental crises, including concrete/visual poems about plastic pollution.

This new collection embraces the wider world more than my past two books of poetry, although there are still some autobiographical poems about childhood and parenthood (both odes and laments). This openness is reflected in how I played with white space in several poems. I also experimented with form, for example in “Dark Mirror”, which is a palindrome about screen addiction, and “Spectrum”, a longer sequenced poem with sections about my partner’s cancer diagnosis and surgery.

Although English was her second language, my mother read, played and sang English nursery songs to me when I was a toddler. (My parents were Cantonese-speaking Hong Kong immigrants who met and worked in Scotland as physicians. My mother’s English was never great, and she wanted to ensure that we spoke English better than she did.) I still have the book of nursery songs she brought with us from Scotland.  My mother recited poems in Cantonese at a few Robert Burns’ evenings when I was very young.  Her Scottish friends loved it.  She could also recite a few lines in English. It was the first poet I’d ever heard of as a kid. She loved how democratic and accessible Burns’ poems were, and delighted in their inherent musicality.

3 - How long does it take to start any particular writing project? Does your writing initially come quickly, or is it a slow process? Do first drafts appear looking close to their final shape, or does your work come out of copious notes?
Some projects emerge quickly, such as the concrete/visual poems about plastic pollution in Odes & Laments. It came after a period of percolation: I had a recurring image of a spiraling gyre-shaped poem. My friend, Shannon Cowan lent me her ancient manual typewriter during a weekend writing retreat on Vancouver Island.  When I discovered that typing out the poem didn’t produce the desired effect, she taught me how to use WordArt on my ancient refurbished laptop. It was a revelation! I spent the rest of retreat and the ferry ride home generating a number of “plasticpoems”, obsessively experimenting with font, size, shape, and placement, making various adjustments.  Most of the early drafts were very close to their final shape within those few days.

I turned one of those plasticpoems, “Plasticnic”, into an animated video poem with the help of a fantastic young animator, Tish Deb Pillai who had recently graduated from Emily Carr University. “Plasticnic” has been selected for screening at international festivals and events—Athens, Newlyn (UK), Houston, Detroit, Tennessee, Cork (Ireland).  Earlier this year I worked with another animator, Nhat Truong, to make another animated video poem, “Plasticpoems” which has been selected for festivals in Seattle and Toronto.

Other projects have a longer gestation. I’ve carved out other poems from pages of brainstorming, notes, and research. First drafts can be longer or shorter than the final version. Usually there’s extensive tweaking and refining afterward.

A poem can begin with a word, a phrase, an image, an object, a shape, a voice, a story—anything. My last two poetry books began with individual poems that were organized into a larger project. Odes & Laments originated in a desire to write odes about ordinary objects, and expanded into writing laments about the state of the environment and other losses.

5 - Are public readings part of or counter to your creative process? Are you the sort of writer who enjoys doing readings?
An effective public reading can make good poems come alive. Once listeners hear a poem read well, they will revisit it on the page with a deeper sense of its spirit and intent.  Because I’ve always been introverted, awkward and shy, I took drama courses at Langara College’s Continuing Studies Department in improvisation and voice to become a more effective reader/performer. Even though I’m always nervous before a reading, I try to do justice to the words, whether they are my own or another poet’s, with the aim of connecting with whoever is listening.  I’m pleased whenever I succeed in making that connection.

A good editor is necessary to hone any collection of poems. The exchange, the to-and-fro, can lead to all kinds of insights and improvements. With Odes & Laments, I worked again with Anne Simpson who had a familiarity with experiments in form, and who is comfortable with diverse poetic styles and approaches. She has excellent instincts about each poem’s potential and intention, and is rigorous about pruning excess verbiage. What I’ve learned from Anne and other editors has come in handy when I’ve edited others’ work, for example when editing the Canadian cancer-themed poems in The Bright Well (Leaf Press, 2011), and co-editing the nonfiction and poetry in the relationship-themed anthology, Love Me True (Caitlin Press, 2018).

8- How easy has it been for you to move between genres? What do you see as the appeal?

I’ve written poetry, short fiction, creative nonfiction and articles. It can sometimes be hard to switch from nonfiction to poetry because of how poems communicate through images and metaphor, often abandoning the linearity of exposition, logic and reason. Rediscovering the imaginative leaps, music, compression and concision essential to lyric/narrative poetry takes time, although reading poetry regularly helps. Part of the challenge of nonfiction has to do with proving versus positing: setting up a persuasive argument that might mean research, footnotes, analysis.  An analogy: steel toed work boots versus ballet slippers! A ballet dancer might work just as hard as a construction worker. They just use different muscles in a different way.

9 - David W. McFadden once said that books come from books, but are there any other forms that influence your work, whether nature, music, science or visual art?

In Odes & Laments, paintings inspired the three ekphrastic poems (Vermeer, Mary Pratt, and Jose Guerrero). Plastic garbage inspired the shape of concrete/visual plasticpoems. My mother’s piano-playing inspired a prose poem.  News articles and photographs were starting points for some poems (e.g. an article about North Korea launching nuclear missiles, a photo about a father and his four-year-old son incarcerated in Iraq by American soldiers).  I have a fair number of food poems in this collection (e.g. raspberries, oranges, rice, peaches, potatoes), maybe because good food has always been central to my family, culture, and community--or maybe just because I really like to eat.

10 - What would you like to do that you haven't yet done?

I’ve always wanted to play music in an ensemble so I tried a gamelan class for the first time this summer. Although I’m not very good at all, I hope to join a student ensemble in January. I’d like to learn to play a few tunes on the accordion and cello. One day I’d like to help build a small, self-sustaining, 100% eco-friendly home—passive house or active house with rain barrels, a grey water system, solar panels, green roof, etc. and facilitate others doing the same.

I loved Natalie Diaz’s intense, powerful poems about her drug-addicted brother and her hapless parents in When My Brother Was An Aztec. Bong Joon-Ho’s Snowpiercer was a high octane film about social class, oppression and revolution, set on a perpetually travelling luxury train during a second Ice Age. A quieter, subtler film that I found both beautiful and moving was Columbus, directed by Kogonada. John Cho plays an estranged son who returns to visit his dying father and befriends Haley Lu Richardson, a young woman who has stifled her own educational aspirations in order to care for her mother. The modernist architecture of the town both frames and mirrors the interaction of the characters.

Besides chipping away at ongoing poetry and prose projects in between teaching and mentoring, I am currently working on my fifth poetry video, “Utility Pole” (yes, an ode to an ordinary thing!). This time I am collaborating with Mary McDonald, a multimedia artist from London,Ontario. I met her in Houston, Texas at the inaugural Reel Poetry Festival this past May. Her use of digital montage based on Penn Kemp’s poems impressed everyone attending.