Bob Kaufman is a poet; Bob Kaufman is a man steeped in a mythology sprinkled with a few facts. For many he exists as the man who wrote poems on newspaper margins, the man flowing with plied, jazz-infused visions as wife or friend transcribed his surrealistic rants, the man yelling poems at strangers parking their cars on North Beach street corners, the man repeatedly and repeatedly arrested on San Francisco streets, at times after being harshly beaten by the arresting officers, the man who took a vow of silence unbroken for eleven years. For me he began as the father of a long-forgotten toddle playmate. He was my parents’ friend who came to house parties and wreaked havoc. He was the author of a yellow-covered little book of poetry that held my father’s favorite poem, which he often quoted:

The first man was an idealist, but he died,
he couldn’t survive the first truth,
discovering that the whole
world, all of it, was all his …

I was intrigued to see a copy of the new Collected Poems of Bob Kaufman, edited by Neeli Cherkovski, Raymond Foye, Tate Swindell, with a Foreword by devorah major (San Francisco CA: City Lights Books, 2019). I’d not actually encountered Kaufman’s work prior to this, but for a poem composed in tribute to the late poet (1925-1986) by Ottawa poet Michael Dennis, included in his classic poems for jessica-flynn (1986). My knowledge of Kaufman is scant: aware of his peripheral associations with and around the Beat poets, and little more. As the back cover to this new volume attests, Kaufman “was one of the most important—and most original—poets of the twentieth century. He is among the inaugurators of what today is characterized as the Afro-Surreal, uniting the surrealist practice of automatic writing with the jazz concept of spontaneous composition.” Collected Poems of Bob Kaufman, then, is a hefty volume of his work, from the three books published during his lifetime—Solitudes Crowed with Loneliness (New Directions, 1965), Golden Sardine (City Lights, 1967) and The Ancient Rain: Poems 1956-1978 (New Directions, 1981)—as well as a healthy selection of uncollected pieces, as the opening “Editorial Note” offers, “from small magazines and public or private collections, diligently unearthed by Tate Swindell, who also compiled the valuable biographical chronology containing much new information.”

NO  MORE JAZZ AT ALCATRAZ

No trombone for
Al Capone

No piano for
Lucky Luciano

No more cello for
Frank Costello 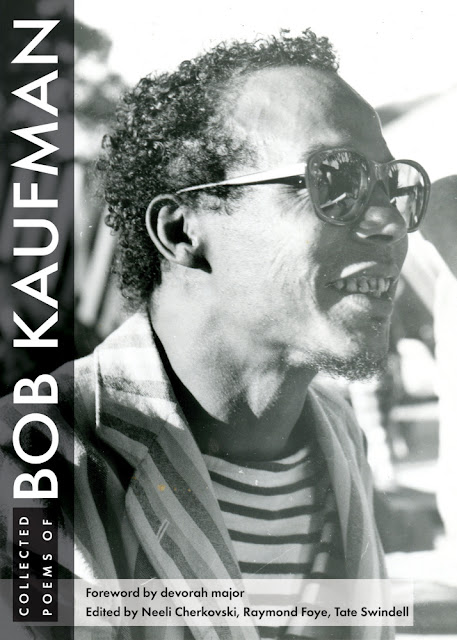 The work included here shows Kaufman as a restless writer, one who moved through Beat associations and jazz through to Buddhist teachings, of play and critique and observations on culture, street life, race and simply where his curious attentions would take him, from lyric poems to chants to rants to memoirs composed in prose. Listen to the poem “NO MORE JAZZ AT ALCATRAZ,” a poem from the hefty section of “Uncollected Works,” includes the footnote “Spoken by Bob Kaufman at Specs’ Bar in San Francisco, February 19, 1980; transcribed by Jack Micheline.” This is a short, quirky poem clearly composed for the sake of performance; is quick and playful with rhyme, but one that can’t exist without a far darkner underpinning, one that speaks to violence and race. Kaufman is easily one of those poets of the 20th century known of far more than read, and read more than understood, something this new volume works very much to correct, with a volume that also features devorah major’s worthy Foreword with accompanying archival photographs, and essays on Kaufman and his work by Neeli Cherkovski and Raymond Foye. The two hundred pages-plus of this new Collected Poems of Bob Kaufman has obviously been compiled with an enormous amount of care and attention, clearly as homage for a man as difficult as he was beloved, and as brilliant as he was evasive. As Cherkovski writes in “REMEMBERING BOB,” an excerpt from Whitman’s Wild Children (1988):

Bob Kaufman strived toward an understanding of the universality necessary for great poetry. He felt that narrow ideological concerns could shut down the “fountain,” as he described it to me. He once told me, “I’m black, Jewish, white, green, and yellow with a blue man inside me struggling to come out.” Often, he begins a poem with his eyes or his head or some other part of his anatomy, and moves outward into the world. He is not visceral but gracefully attuned to his body as a key to opening “the mysteries” he refers to in his poetry. In “Blues for Hal Waters,” he refers to his head as “my secret cranial guitar”; another poem asks, “would you wear my eyes?” Even in the saddest poems he emerges joyous out of ecstatic love for language and its possibilities, reaching out to others: