Of all the ways to enter. Let it be through the throat.

I’m very taken with the evocative and understated poems that make up Michigan poet Oliver Baez Bendorf’s second full-length poetry collection Advantages of Being Evergreen (Cleveland State University Poetry Center, 2019). Advantages of Being Evergreen is a follow-up to his debut, The Spectral Wilderness (The Kent State University Press, 2015), and the poems within are lyric and deeply personal, composed as elegies for what erodes, and might finally, completely, be lost. There is a vulnerability displayed throughout this collection, and a great deal of empathy, writing out a sequence of meditations on how the world works, and how the world, as we see it, is supposed to, as he writes as part of the poem “EVERGREEN”: “Water boils in a kettle in the woods / and I can hear the train grow louder / but I also can’t, you know? / Then I’m shaving in front of / an unbreakable mirror while a nurse / watches over my shoulder. / Damn. What still grows in winter?” 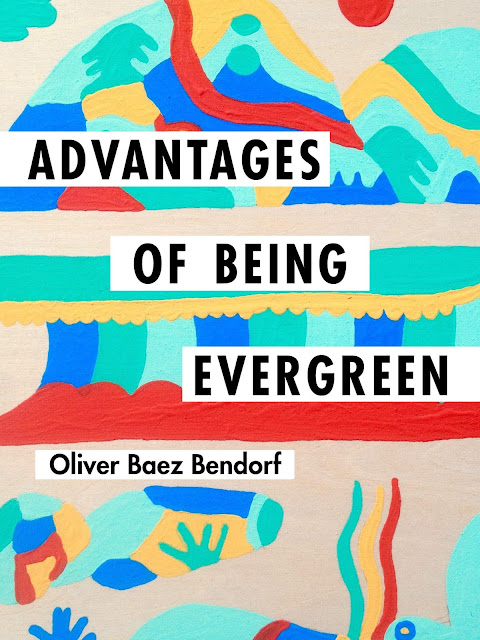 Bendorf writes on pain, queerness and of both going under and pulling oneself back up again: “does ever animal / communicate / the way / my tongue / hurts?” he writes, to open the poem “EVERYTHING HURTS IN A GOOD WAY”: “I go to the river I was under, // I make the ////river /// red [.]” His is a poetry that exists as part of the world; writing from deep within, as opposed to from the outside, peering in. As part of an interview posted July 17, 2017 on Divedapper, conducted by Kaveh Akbar, Bendorf responds:

I'm always interested in this question—which I first heard Elizabeth Bradfield articulate in an interview.   She’s talking about why she decided to put a series of ‘butch poems’ in a book —Interpretive Work— that is otherwise about being a nature interpreter. And Bradfield so succinctly described the connection, in a way that has really resonated with my work, which is that it's all tied in to this question of “What is natural and who decides?” Queerness as plain as the sea; it only gets politicized as being unnatural. Nature itself, which we are part of, is wild and strange and full of its own ideas about the shapes and forms that things take. So that definitely feels related to The Spectral Wilderness. One of the questions throughout The Spectral Wilderness is “How much aloneness is required for transformation?” Must we go it alone?

Oh, interesting. That's a good way to articulate that.

And the working title of my current manuscript is Togetherness Dreams. So it's a departure from that place of aloneness. I’m learning just how much transformation takes place in the spaces between each other; it’s relational. The desire to be seen.   My next book mostly takes place on and around a river, which is a literal river, and also every river, our interconnectedness and how to keep that from drying up. River as grief we float down, river as canary for climate change. Borders, state lines, red states, blue states—rivers laugh in the face of that. What happens upstream happens downstream, too. After the election, I would stare at the Gihon River at VSC every day and I began to imagine a river where everyone I know and love can go to be free and be seen and also, of course, have the health care we all deserve. When I drive around this enormous country, I want to follow rivers.