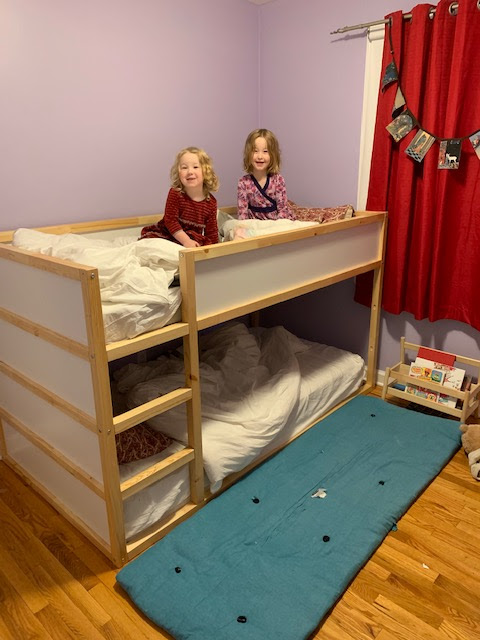 [Rose and Aoife with their new bunk bed; and newly-painted bedroom!]

Here I go again. And who am I to go against tradition? Once more, I offer my annual list of the seemingly-arbitrary “worth repeating” (given ‘best’ is such an inconclusive designation), constructed from the list of Canadian poetry titles I’ve managed to review throughout the past year. This is my ninth annual list [see also: 2018, 2017, 2016, 2015, 2014, 2013, 2012, 2011] since dusie-maven Susana Gardner originally suggested various dusie-esque poets write up their own versions of same, and I thank her both for the ongoing opportunity, and the prompting that started me off in the first place.

I’ve been far less active as a reviewer this past year as I might have wished, given I’m home with our two young ladies (Rose turned 6 in November, and Aoife turns 4 this coming April), and have been assisting with father-care on the homestead given his February diagnosis of ALS, and then Christine’s mini-stroke back in May and September bout of meningitis (I know, right? and she only returned to work last week, after such a long absence). But still: given how long this list is, maybe I should just calm the hell down? With a list forty titles long, it does seem ridiculous to suggest that I couldn’t list everyone, but I couldn’t list everyone! And I couldn’t short-change it, either. And, despite realizing I reviewed more than one hundred poetry titles on the blog over the past year (not including chapbooks, non-fiction and fiction titles, literary journals, etcetera), there are just so many good and great books appearing by Canadian poets these days (and I know there are many I wasn’t able to get to, as per usual). So the message is, clearly: stop being amazing, everyone!