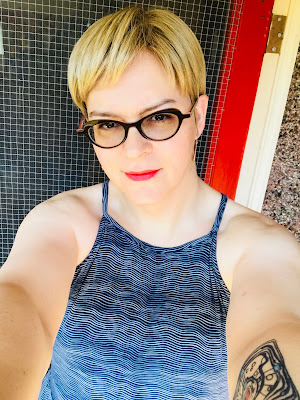 Hazel Jane Plante is a queer trans librarian, cat photographer, and writer. In a previous life, she co-founded a micropress, co-edited a little literary journal, co-hosted a podcast, and released lo-fi albums under the name sparse. Little Blue Encyclopedia (for Vivian) is her debut novel. She currently lives in Vancouver on the unceded ancestral territories of the xʷməθkʷəy̓əm (Musqueam), Sḵwx̱wú7mesh (Squamish), and sə̓lílwətaʔɬ (Tsleil-Waututh) Nations.

Most of my work before Little Blue Encyclopedia (for Vivian) was experimental poetry that I put into the world through tiny publications (chapbooks, ephemera, etc.) via the gift economy of micropublishing.

This is my first book and it feels too early to say how it will change my life. It’s only been a few weeks since it was released and it’s still slowly rippling its way into the world. That being said, I’ve been amazed at how well it seems to be landing for readers because I thought I’d written a really weird little book that would only resonate with trans and queer readers. But other readers seem to love it too, which I’d never expected or anticipated.

I came quite late to fiction, actually. I had been writing poetry for several years when I started working on this novel. At some point, I started realizing that I had a larger story to tell and grappled with how to tell it (a cycle of songs? a long poem? a collection of linked stories?), and, finally, recognized after testing the waters that I might need to wade into the pool of longer fiction to try telling the strange, sad, and funny story that I wanted to tell.

Different projects take root and bloom differently. This novel took about nine years to write and went through a variety of structural and tonal changes. Nine years feels slow. The first draft had similarities in shape to the final book, but it lacked the nuance and cohesiveness of the final draft.

I never know what final form something is going to take when I start out. There’s a pretty long process of discovery, of figuring out what matters to me, what’s worth spending time on. For fiction, there’s a lot of work figuring out who the characters are, which involves (for me) a lot of digging and building and openness. I’ll be writing and hear a character say something that surprises me and will just go with it, following their lead. It’s hard to describe, but I do try to be open to whatever comes across my transom.

I have a vague idea for another novel now, but I’m aware that it will take years to come to fruition, if it ever does. When things bubble up that feel related to that book, I’ll quickly jot them in a document and get on with my life. I’m also doing the same thing for a non-fiction work. I don’t really have time to devote to either of them right now, but I do want to capture stray twigs that might help me to later fashion a nest that becomes a book.

I have been having so much fun reading in public from my novel. It’s been so fucking great to share a book I’ve been working on for so long and to make a room full of people feel things together. I’ve been enjoying stringing together small extracts from my novel for each different event. I’ve been referring to them as “bespoke” readings because they are tailored for that city or event. So, for example, the launches for Victoria and Montreal will be very different. Maybe one city gets a slick black raincoat and another gets a rhinestone-encrusted Nudie suit.

I don’t think public readings are a part of my creative process, but the conversations that stem from them might inform later works, if that makes sense.

Hmm. I don’t think most writers are in the midst of the “larger culture,” particularly the marginalized writers I tilt towards. I wish those writers were in the zeitgeist media mix; I wish they were valued and quoted and invited into wider conversations.

It depends on the project. For my novel, I really wanted outside editors to help me to make the book better than I could make it on my own, to help me find the right level of humour and sadness, of density and airiness. There were only three publishers who I was keen to work with, and Metonymy Press was at the top of my list because of their ongoing commitment to trans writers and readers. Ashley and Oliver at Metonymy were essential to making it the book that it became, which is very much the book I hoped it would be when I started working on it years ago.

“Accept being unimportant.” I first read this brief sentence over twenty years ago in a translation (by Gia-Fu Feng and Jane English) of the Tao Te Ching, and I return to it constantly, especially when everything seems to be adrift. I find my own relative unimportance profoundly comforting.

10 - How easy has it been for you to move between genres (fiction to songwriting)? What do you see as the appeal?

So far, that hasn’t really happened. My creative projects have been consecutive rather than concurrent. Writing and recording songs is immediate and involves very little editing. Writing fiction is slow. So slow. I didn’t even share a draft of my novel with anyone until I had one that I thought was okay, which took about six or seven years. But the architecture of fiction is super capacious, and there can be a beauty in its bagginess, in the way it allows you room to unfold moments and characters and tiny details. You can take super fucking weird turns in a novel in ways that songs, poetry, and short fiction don’t really permit.

My life currently feels far too chaotic to allow for a writing routine. I try to carve out small pockets of time here and there, but even that feels difficult. (For example, I’m currently writing my answers to these questions while riding through East Vancouver on a crowded bus.)

I’d like to say that I go for a walk, but that never happens. Instead, I typically make myself a cup of coffee or listen to music. For any given project, I try to have specific songs that get me into the mindset of that particular work, songs that centre me and cut through the clutter. That being said, there were many times when I lost hours of “writing time” by getting sucked into a funnel of songs that were ostensibly connected to specific characters in my novel.

My novel is steeped in so many other forms, including television (it’s written in the form of an encyclopedia about a fictional TV series called Little Blue), music (especially Britpop), visual art, films, zines, etc.

Wow. What a question. Like most writers, there are so many writers who are deeply important to me. Without works by other trans writers, my book would not exist. I’m so inspired by trans writers like Casey Plett, Vivek Shraya, Kai Cheng Thom, Trish Salah, Tom Cho, Gwen Benaway, Torrey Peters, Imogen Binnie, etc., etc., etc. There are also so many writers whose work I’ve loved since forever (William Blake, Phyllis Webb, Fernando Pessoa, Roy Kiyooka, etc.) and writers who I’ve discovered more recently and adore (Ocean Vuong, Maggie Nelson, Hanif Abdurraqib, Zoey Leigh Peterson, etc.).

16 - What would you like to do that you haven't yet done?
There’s a scene in my book about a band of trans women called Femme Task Force. I tried for a couple years to put together a band of trans women and finally put that project on hold and just pretended that band existed and wrote it into my book. Now maybe I wanna put together a group of all trans women to cover songs by the Silver Jews (fuck, David Berman, you were a special and brilliant writer) under the name Silver Jukebox.

I’ve been a librarian for just over a decade. If I had the ability (and the requisite hustle-ability), I’d wanna be a visual artist or a musician or a filmmaker.

If I hadn’t been a writer, I’d likely have pestered people in my periphery with an endless supply of weird ideas and non sequiturs, like the ones that pepper my novel.

Books kinda saved my life at various points. And I’ve been trying to write since I was ten years old.

On the book front, Paul Takes the Form of a Mortal Girl by Andrea Lawlor was smart, queer, sexy, funny, and pretty great, and Midsommar is a film I’ve found myself thinking about a lot since seeing it in the theatre. It’s dark and disturbing and weirdly hilarious.

I’m currently trying to work on a few different collaborations with people who I like and whose work I admire. After working on this novel for several years on my own, I’m interested in the kind of energy that comes from collaborating.