I am standing in the river and, absent any structural changes, I will still be standing in the river. Absent any structural changes, I am examining an inky pen I found in the river. This was how I first gained access to Gertrude Stein’s deathbed. Pull the curtain back and Gertrude Stein’s deathbed is there. “Deathbeds are a leisure product,” the voice from above calls out. The voice from above is a rescue pattern, the sincerely possessed dovetail center. I forgot that I had started weeping just for the compensatory elation. When did I get to be outside of being a woman? The woman without qualities. Around the deathbed are many objects and beside each object a moment of private translation. Communications are like whiskers jutting out sideways from the mouth, and we are drinking wine and talking about being born. (“Mother of All”)

I’ve been eager to see Brooklyn poet, editor and publisher (being that she is half of the chapbook publisher DoubleCross Press, alongside MC Hyland) Anna Gurton-Wachter’s full-length debut, Utopia Pipe Dream Memory (Brooklyn NY: Ugly Duckling Presse, 2019), for a while now, even well before it was announced. Gurton-Wachter’s work is some of the most striking I’ve seen in an emerging poet in quite some time, and I feel enormously fortunate to have been able to produce her chapbook Mother of All (2018) through above/ground press, a sequence since included in this full-length collection. Her work is thoughtful, complex and absolutely stunning. One could say that Utopia Pipe Dream Memory is constructed less out of poems than out of poem-sections, extending one thought into another thought from the sentence outward, with eight poem-sections in total: “Poem from Hypothesis,” “Mother of All,” “Utopia Pipe Dream Memory I,” “Maya Deren Lives Forever / in the Speedboat at Night,” “Utopia Pipe Dream Memory II,” “A Development Proposal / for the Center of the Earth,” “Utopia Pipe Dream Memory III” and “Rebirth Scenario, / or Instances of the Corpse / Flower Pose, A Study Group.” Her poems revel in the sentence and short paragraph; in collage, a myriad of extended queries and commentaries, and the careful sidestep of a skillfully-executed digression. She works at the level, it would seem, of absorbing, questioning and repurposing, composing Utopia Pipe Dream Memory as a book-length study of feminist thinking, referencing, cribbing and writing around Bernadette Mayer, Sina Queyras, Jacqueline Frost, Carla Harryman, Laura Riding, Peggy Ahwesh and multiple others, as she writes to open the poem-section “Utopia Pipe Dream Memory I”:

This being an accont of our reckoning under the weight of a true fact that there are states only known through their being abandoned. There is no being without the generosity of limits. Bernadette Mayer is combing my hair. The world is a navel again. This being an account of shelter’s turning point. I do not have the language but the violence of personhood, she said as she unknotted me. Had I known then how to see the field of unknotting figuration, I might have also seen the unknotting evening dipping into the unknotted and knowable eardrum, tuning in and out collapsed, combed through, the distance from each instrument bodily begun. 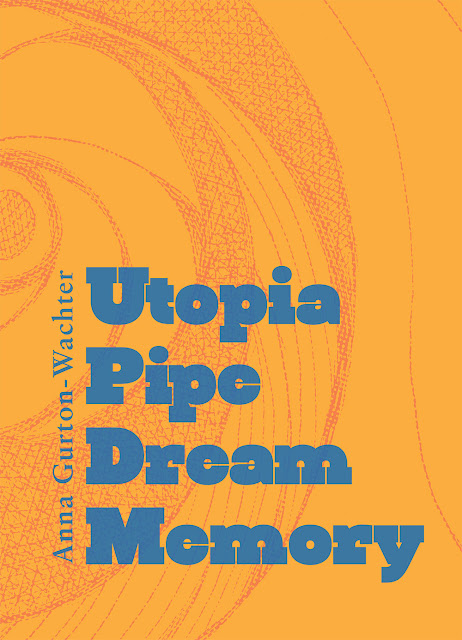 In a review I posted last year of Seattle poet Hailey Higdon’s first full-length collection, Hard Some (Brooklyn NY: Spuyten Duyvil, 2019) [see my review of such here], I suggested a similarity between the compositional structures of the two poets, but I might have been off in suggesting their shared purposes, ie their book-length constructions out of chapbook-length sections. Higdon’s work gives the sense that the assemblage of full-length book out of chapbook-length sections is a bit arbitrary; she might be working on a project far larger than what might be contained in a single volume. Gurton-Wachter’s work, on the other hand, gives the sense that her work, while ongoing, was focused very much on the book as her unit of composition, which, secondarily, was constructed out of chapbook-length prose poem sequences (I might just be splitting hairs, here, so to speak). Or perhaps Gurton-Wachter, instead, works towards more of a continued, perpetually evolving and continuous ongoingness, from project to project, of which Utopia Pipe Dream Memory is simply a single, completed step upon the way. I am also quite fascinated in how she utilizes material from other sources, from reading and thinking to poetry and film to participating in a reading group. As she writes as part of her notes at the back of the collection:

Mother of All was written when the news was circling of the United States dropping the Mother of All Bombs on Afghanistan in April of 2017. The Mother of Us All is also the title of a libretto written by Gertrude Stein. During the writing of this book, the discussion to make women bury their aborted fetuses was discussed and in some cases implemented. Cecil the lion was killed. The corpse flower bloomed. I read D.W. Winnicott’s Playing and Reality. I read many books about vision and material culture. I took a workshop with Julian Brolanski called “Visions and Visionary Poetics” and Poet’s House. I am appreciative of the feedback I received from Julian and the rest of the workshop participants.

The Interludes contain a mixture of remixed words and short phrases culled from three main sources: 1) Bernadette Mayer speaking at the Canada Gallery about her exhibition Memory 2) Notes from discussion taken during The Bernadette Mayer Feminist Reading Group at The Poetry Project in NYC, in which we read and discussed Mayer’s work, particularly Utopia and Memory 3) Various interviews with Maryanne Amacher in which she describes her sound installations and her experiences visiting La Monte Young and Marian Zazeela’s project Dream House.

There is such an ease to her complexity, one that sparks and sparkles across sentences and pages, linking one disparate thing against another. She does seem to delight in connecting what might otherwise not have been possible, or obvious, and the results are incredible. Recently, over at the Poetry Society of America website, Gurton-Wachter wrote on the opening poem of this new collection, as part of their “In Their Own Words” series, writing:

This is the first poem, or proem, in my first book Utopia Pipe Dream Memory. It encapsulates many of the themes that appear throughout the book: imagined intimacies, invocations, conversations with the world of material objects, hallucinations and visions, animal worlds colliding, the carving out and claiming of space. Like much of the rest of the book it also functions as an homage to my influences, the artists who have shaped my understanding of these themes.

This poem, dedicated to the filmmaker Peggy Ahwesh, was written while thinking through an experience I had as an actor in Ahwesh’s film The Ape of Nature. For this project each actor was hypnotized before being filmed—a nod to, and meditation on, Werner Herzog’s Heart of Glass, which followed the same procedure. On the first day of filming the hypnotist arrived and began working with the other actors on a scene that I was not in. I was to be just an observer, and I sat nearby with a notebook of lined paper in my hands, curious what this unusual specialist would do to hypnotize my fellow actors. As I listened, I found I had started swaying my body back and forth, rubbing the notebook pages and smiling joyously. It was as though I could feel in the blank page, the unwritten words, the entire concept of possibility, of before. I’m a bit suggestible generally but I was also in an environment that Ahwesh had created where I felt that her vision for the narrative of the film remained open as we moved through making it, and that is a really joyful thing to experience. I like thinking about all of the variables that go into making a work of art happen. Sometimes the motions we go through look recognizable, integratable into regular life like measuring things or handling construction tools, but what we are building is play and unreality. There is also a relationship between the hypnotized person, drooling and blissed out, and the creative mind that needs to shut off judgement and editorial tasks until later.

So for me, this poem returns me to the site of openness, a feeling that is older than the material world could be. Yet it returns often to an idea of architecture, of structure, of what would it mean to let animals take over part of your house? To acquiesce to them rather than view them as pests to be gotten rid of? To relinquish traditional attitudes towards property and authorship?

The poem also introduces the reader to a few stylistic moves I do throughout the book, namely piling together a group of nouns to see what hybrid forms I can devise and how much weight they can hold. Utopia Pipe Dream Memory. Origin Earth Admixture. Earthquake Shatterer Poetics King. My sister remarked recently that we are all clinging to nouns, to the stable material thing-ness of them, in times when it is harder to understand how anyone makes anything, says anything, when so much pushes us towards not speaking. As the nouns pile up they become slippery. This thing-ness of language that is so attractive can also shift and make visible the gesture of reaching for words in the face of the unutterable.