my Patreon patron-only blog : Alberta, and The Litter I See Project

Since building myself a Patreon author page, I've also been posting to a password-protected patron-only blog. I thought it might be worth reprinting the occasional post here, for the sake of general interest. Perhaps it might be worth tossing a ducat or two towards?
Here's a post from May 25, 2016, on the composition of a short story since posted here: 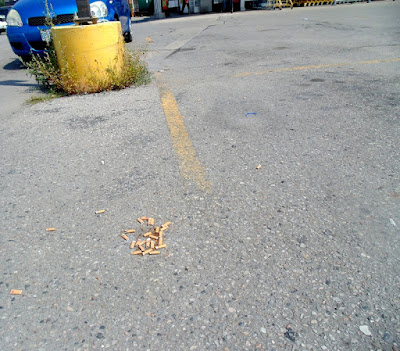 I recently composed a short story for the sake of a website I recently discovered, The Litter I See Project. I was curious at the idea of a project that invited short prose (or poetry, I have discovered) responding to a photograph of litter; it reminded me of an anthology I picked up a couple of moths ago, Significant Objects: 100 Extraordinary Stories About Ordinary Things (Fantagraphic Books, 2012). Instead of writing from litter, the anthology composed pieces from found and/or thrift store items.

I spent the entirety of my writing day this past Monday carving and crafting a very short story that accidentally sets in the space somewhere between my novel missing persons (The Mercury Press, 2009) and the short story, “Interruptions,” from my current manuscript-in-progress, “On Beauty.” I’d originally composed “Interruptions” at the prompting of Amanda Earl, who had wondered what might have become of the main character of my novel, so I wrote the teenaged “Alberta” some fifteen (or more) years later in short fiction. Now the manuscript has three stories that include and surround her (and another, in-progress, that attempts to further the story of her mother) at different points in her life, years beyond the events of my second novella.

I wasn’t, also, planning on making Alberta a smoker at any point, but that’s where the photograph took me. The only way it made sense.

Archaeology
Cut to her Saturday afternoon sequence of duMaurier extra lights amid the half-capacity shopping mall parking lot. As usual, Alberta arrives half an hour early, aware that her pre-teen will be fifteen minutes tardy, reveling in her new wealth of shopping detritus and gossip. Until her daughter appears, this is the single stretch of time that Alberta allows herself to breathe; the only moment she isn’t mid-task, or rushing between points or appointments. The only time, too, she allows herself to stoop to such youthful folly: a pack of cigarettes secreted beneath the driver’s seat, set alongside an increasing guilt. Weekly, for nearly an hour, she sits silent on the hood of their Ford Taurus and waits. She inhales. She follows the lacunae of parking lot seagulls, each one paintbrush smooth, floating across blue summer backdrop. On this particular afternoon she ponders rock climbing, hospital waiting rooms and swimming pools. She ponders her lost prairie, and the anonymity of suburban parking lots. She thinks back to the summer she watched a neighbour succumb to throat cancer, and now, as her husband emerges from chemotherapy, stoic and withered and weather-worn. She exhales, attempting to expel all of her fears and concerns along with the four thousand chemicals that make up cigarette smoke: nicotine, tar and carbon monoxide. In the soft August heat, Alberta treats asphalt as midden, newly littered with spent filters. Material remains. If everything were to end now, she wonders, if she were to disappear, might they ever find me. The small assemblage of abandoned butts the only evidence she’d been there at all.

Posted by rob mclennan at 8:31 AM
Labels: essay, fiction, patreon, the litter i see project