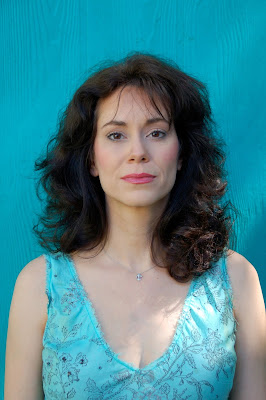 Carolyn Hembree was born in Bristol, Tennessee. Her debut poetry collection, Skinny, came out from Kore Press in 2012. In 2016, Trio House Books published her second collection, Rigging a Chevy into a Time Machine and Other Ways to Escape a Plague, selected by Neil Shepard for the 2015 Trio Award and by Stephanie Strickland for the 2015 Rochelle Ratner Memorial Award. Her work has appeared in Colorado Review, Gulf Coast, The Journal, Poetry Daily, and other publications. She has received grants and fellowships from PEN, the Louisiana Division of the Arts, and the Southern Arts Federation. An assistant professor at the University of New Orleans, Carolyn teaches writing and serves as poetry editor of Bayou Magazine.

1 - How did your first book change your life?
I sent my first poetry manuscript, Skinny, to contests and open reading periods for ten years before Kore Press made it a book in 2012. Cracks of lightning, too, lit that decade-long night of rejection; journals and anthologies printed the poems individually, and the manuscript was a bridesmaid in several contests. (Those modest gowns cost money though.) In sum, I felt gratitude for the book’s acceptance. Practically speaking, the book’s publication weighed in my University’s decision to promote me to a tenure-track position; the course release and raise have made life easier.

How does your most recent work compare to your previous? How does it feel different?
Both books evoke the South and a kind of isolation. The first book exists inside of a dream, not to be helped. No single voice is entirely drawn: all share a telephone party line, snatches of this and that mesh to form a psychology. The second book, Rigging a Chevy into a Time Machine and Other Ways to Escape a Plague, winner of the 2015 Trio Award and the 2015 Rochelle Ratner Memorial Award, feels denser, I suppose. For one, the landscape becomes a character as much as any soul. Doctrine I absorbed in the Presbyterian Church my family attended shows in a fatalism, an inevitability, a finish of the second book. To my mind, the first remains more in the air.

2 - How did you come to poetry first, as opposed to, say, fiction or non-fiction?
In an effort to check my juvenile delinquency, my parents sent me to an evangelical school for the ninth grade. Naturally, my nefarious activities increased in the authoritarian atmosphere, where I quickly found coconspirators with whom to share earbuds during morning prayer (Mötley Crüe’s “Shout at the Devil” our go-to, obviously), to drink vodka during PE, to disrupt assemblies—whether by inciting a chant to call out the tuba player who masturbated under his band jacket during pep rallies or making infant cries during cautionary abortion films. Needless to say, I only attended the school one year. Aside from the fun, this Advanced English teacher, Mrs. Bolla, had us write poems. Mrs. Bolla, who only allowed herself a reading list befitting a conservative Christian woman, pulled my despairing rhymes from the bunch and showed them to her friend, a bona fide poet who sent a gentle and encouraging letter my way. That was all I needed.

3 - How long does it take to start any particular writing project? Does your writing initially come quickly, or is it a slow process? Do first drafts appear looking close to their final shape, or does your work come out of copious notes?
It takes years with stops and starts for research, drafts, rewrites, and final edits across the manuscript to unify motifs and excise overused language. All in all, the second book, a modest 72 pages, took thirteen years, thereabouts.

For any given poem, I start with 100 pages of words: research notes, model syntax, observations, snatches of overheard conversation, images, and so on; this mother document, as it shrinks and expands, serves me for the whole book. I reduce the words the way I imagine a sculptor reduces a block of stone. By the time one emerges, the poem usually knows its shape.

4 - Where does a poem usually begin for you? Are you an author of short pieces that end up combining into a larger project, or are you working on a "book" from the very beginning?
With a few exceptions, I work on books even if the “project” later becomes a single poem.

5 - Are public readings part of or counter to your creative process? Are you the sort of writer who enjoys doing readings?
My acting training informs my natural yet dramatic presentation of the poems. Because I want listeners to have a different experience than they would reading my work, I try to create various narrative, lyric, and rhetorical trajectories through my selection and arrangement of pieces; this preparation requires creative thinking. Yes, the readings serve as part of my creative process, and they run counter to my process. Readings allow me to meet my real audience, which colors the intended audience (the dead, a former self, other poets mainly the dead for me) when I return to the page. So, meeting people who read my work enriches my understanding of audience, a good thing. When I was younger, I could get paralyzed for days after a reading if, say, an older gentleman felt called upon to tell me how valueless he found my work. Now, I’ve learned to better avoid such interactions.

6 - Do you have any theoretical concerns behind your writing? What kinds of questions are you trying to answer with your work? What do you even think the current questions are?
I’m always asking what’s my stake in a thing. A narcissistic creature, I know to be savage with myself, my perceptions, my values. As default practice now, I write the opposite of all direct statements. When I studied under Jane Miller at the University of Arizona, she emphasized the paradox inherent in much poetry, an idea central to my poetics. Yes, I occasionally try to answer questions with the work; Chevy closes with a series of poems titled with questions Stephen Hawking has posed about the nature of time. These questions prompted me to explore Appalachian folklore that addresses the progress of existence, as well as collective and personal memory.

7 – What do you see the current role of the writer being in larger culture? Does s/he even have one? What do you think the role of the writer should be?
Do our roles now differ from back when? Artists are the true historians. Stevens’ “The Idea of Order at Key West” comes to mind: “And when she sang, the sea, / Whatever self it had, became the self / That was her song, for she was the maker.” I believe in the longevity of our art, in the contribution of folks of all stripes, public poets and private ones. I give thanks for this golden age. Yet I can only dictate my role, and “my business is Circumference,” as Dickinson wrote.

8 - Do you find the process of working with an outside editor difficult or essential (or both)?
Essential. By the time an editor lays hands on my work, I have so excoriated it that I welcome outside input. I also have incisive readers who work me over before an editor enters the picture.

9 - What is the best piece of advice you've heard (not necessarily given to you directly)?
Well, I’m not going to offer one “best” (Circumference, you know):

“You are a poet all of the time.” –Jane Miller

“... nothing could be ruined in one stroke.” –Elizabeth Alexander

11 - What kind of writing routine do you tend to keep, or do you even have one? How does a typical day (for you) begin?
I get my kid ready in the morning, alternate transporting her to school/camp with my spouse, practice yoga, meditate, then read and write for two hours. Usually, I have to get on with teaching or lesson preparation at that point. However, during the summer months, I’ll take a walking break after two hours then write for another one or two. As I have zero impulse control, I keep all distractions at bay during my writing time by blocking the Internet and silencing my phone.

12 - When your writing gets stalled, where do you turn or return for (for lack of a better word) inspiration?
Since my process accommodates alternating periods of research and periods of writing, I tend not to get too stalled. When I was younger, blocks occurred more, but now I better understand, for good and ill, how my imagination works, that my mind has to wander, to meander, to steep.

13 - What fragrance reminds you of home?
Blue Grass dusting powder, Halls cough drops, Granny’s beef stew, damp books, honeysuckle, elms. There was an apple tree, so a cooking-apple tree in bloom. I’ve had many homes though. New Orleans now. And what does New Orleans not smell like?

14 - David W. McFadden once said that books come from books, but are there any other forms that influence your work, whether nature, music, science or visual art?
To return to Jane’s advice on being a poet “all the time,” I try to stay alert to everything: when visiting a museum, walking my neighborhood, eavesdropping in the grocery line, listening to traffic, watching trash television, reading an anthropology article. ... Aside from reading, I get a tremendous lot from interviews of survivors of violent crimes. What interests me – how we attempt to verbalize the unutterable: idioms get mixed, banal phrases repeated, and dialogue recalled precisely.

15 - What other writers or writings are important for your work, or simply your life outside of your work?
Dickinson, Donne, KJV Bible, early anonymous ballads, Shakespeare, Etheridge Knight, John Berryman, C.D. Wright, Harryette Mullen, Claudia Rankine, Beckett, Kafka, Faulkner, Chekhov. I don’t have a reading life outside of my work.

17 - If you could pick any other occupation to attempt, what would it be? Or, alternately, what do you think you would have ended up doing had you not been a writer?
I’ll go with the latter question: prosecuting attorney, missionary, literary agent, improvisational actor, or circus contortionist.

18 - What made you write, as opposed to doing something else?
It stuck around.

20 - What are you currently working on?
Two books of poetry: one a book-length project, one in loose pages. As my middle-aged great-grandmother –women from my line, we’re small-framed with prodigious stomachs – when asked by a neighbor if she was pregnant (she was not) responded, “Only time will tell, only time will tell.”